This ‘Leading Lady’ is a champ | Inquirer Lifestyle ❮ ❯ 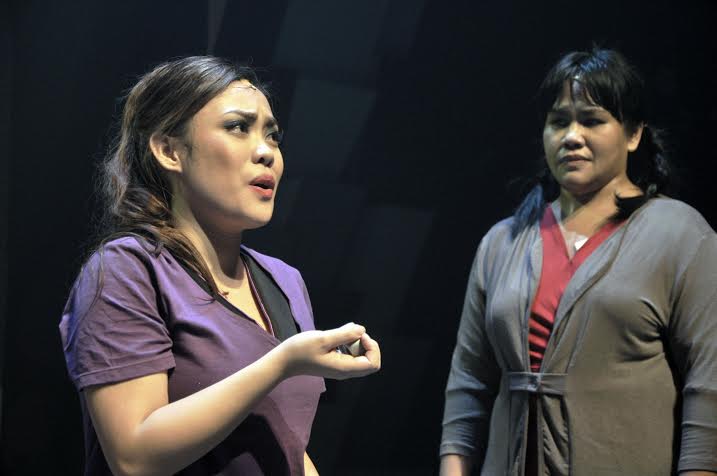 Kim Molina as Viva and Bituin Escalante as Mely. Natasha Cabrera and Frenchie Dy alternate in their roles. PHOTO BY ERICKSON DELA CRUz

This ‘Leading Lady’ is a champ

What’s a superhero story without a quotable quote? “Spider-Man” has “With great power comes great responsibility,” while “Superman” has the sturdy “I’m here to fight for truth, justice and the American Way.”

Meanwhile, the superpower-wielding, spandex-and-leatherette-clad denizens of Carlo Vergara’s “Kung Paano Ako Naging Leading Lady”—the jubilant musical adaptation of which runs until June 7 at the Peta Theater Center, directed by Chris Martinez—rings to an equally ear-friendly precept: “True heroes might make mistakes, but their heart has to be in the right place.”

That’s the reminder the leader of Fuwerza Filipinas, Madre de Dios (Menchu Lauchengco-Yulo, alternating with Astarte Abraham), proffers at one point to Leading Man (Markki Stroem and Hans Eckstein), the restless new recruit to “the world’s greatest superhero team” that just happens to be headquartered and performing its fantastic feats of crime-fighting in the Philippines.

Or, at least, that’s how we heard the line on the first weekend we saw the show. The dictum was repeated in the end, so it appeared designed to serve as some sort of takeaway moral after all the tribulations the musical’s characters go through in the course of three hours of this irrepressibly entertaining, if occasionally saggy, musical.

On “Leading Lady’s” second weekend, however, the line had been changed to something more prosaic—now an offhand-sounding bit at the tail end of a long piece of dialogue.

“They might make mistakes,” Madre De Dios tells Leading Man, referring to the teammates he tends to butt heads with. “But their hearts are always in the right place.”

It’s a change, however tiny, that lets some crucial air out of this musical’s superhero narrative. But we’d like to think it paints a bigger picture.

That its creators (there’s also composer-lyricist Vince de Jesus) continue to tinker with the musical, doing nips and tucks here and there even as the show is well into its five-week run, indicates that they continue to see the production as a work in progress. That can only be for the better.

The Madre de Dios line, after all, wasn’t in the original script—Vergara’s one-act play directed by Martinez for the Virgin Labfest in 2013. That play, a droll, compact study of the complex dynamics between two very different sisters, already stood out in the Labfest as atypical material.

In a drama festival usually chock-full with “serious” fare, Vergara—the creator of the hit graphic novel “ZsaZsa Zaturnnah,” the transformation of which into a record-smashing musical production under Tanghalang Pilipino in 2006 effectively served as the template for “Leading Lady”—whipped up something fresh and off-kilter with a zany fantasy about Filipino siblings squabbling over love, family and responsibility in a superhero lair.

Asked by the new theater company Dalanghita Productions to expand his material into a full-blown book that could accommodate song, dance and razzmatazz, Vergara (with assist from cowriter Pertee Briñas) obliged with the sprawling, multi-character panorama that is now “Kung Paano Ako Naging Leading Lady, The Musical”—at 30-strong, perhaps already the biggest cast theatergoers will see in a local production this year.

(RELATED STORY: Why ‘Kung Paano Ako Naging Leading Lady’ might just turn out to be the year’s biggest musical)

Any enlargement of that kind would result in some stretch marks, and “Leading Lady” is not spared them. The distended narrative has acquired both soft and blind spots.

While the central characters of the bickering sisters Mely (Bituin Escalante alternating with Frenchie Dy) and Viva (Kim Molina and Natasha Cabrera) remain solid and have, in fact, sunk more poignant roots, the now-in-the-flesh superhero possé—inventively costumed by Tuxqs Rutaquio, who also did the set—is often a fuzzily motivated bunch.

A musical comedy about maids and their superhuman bosses might appear silly and trivial and, thus, in no need of more exacting consideration. But “Leading Lady,” even at its silliest, comes off as bigger than it ostensibly is, so fudged characterization only takes away from the otherwise smart, resourceful work that underpins this musical.

Vergara, to be sure, is a sharp caricaturist, with a particularly fey sensibility. The upper-class superheroes under the Fuwerza Filipinas banner, for instance, go by names such as Windang Woman, Nena Babushka, Popoy Pusakal, Bazooka Man.

And he has the witty language to match, whether in Filipino (the indolent Viva gets chided by her mother with “Lantutay ka na nga, talipandas ka pa!”) or English (“Anomaly detected at coordinates 7.12 longitude and 125.62 latitude, moving southeast,” intones the robot/computer—a scene-stealing Kakki Teodoro—at the Fuwerza Filipinas headquarters. “Initial reports indicate a giant carnivorous parasitic organism with a biological signature similar to a corrupt politician”).

It’s in his treatment of the designated villains that Vergara appears to have hedged his bets. (Spoiler alert.)

The KayumangGilas—the parvenu opposites of the celebrity Fuwerza team, the “jologs, sakang at mabilog” ordinary folk “[na] lumaki sa isaw at balut,” as their explosive number in Act 2 celebrates (the show’s best musical moment, incidentally)—resent their “alta” counterparts’ hold on the public esteem.

They would trick Viva into attempting to rescue her sister, now the maid in the Fuwerza Filipinas household, by telling her that the Fuwerza, behind their good deeds, is, in fact, a criminal syndicate.

It’s never made clear what the crimes of the high-flying jet-set are, or even if there’s any, that would justify the harrowing comeuppance they would get from the KayumangGilas. Wittingly or not, the stand-ins for the average Pinoy, the ones more kindred to us, remain unreconstructed knaves to the end, black and unredeemed.

Even while played with marvelous relish by an ensemble that includes JC Santos (alternating with Elliot Eustacio), Red Concepcion, Red Nuestro, Vince Lim (alternating with a still unsteady Mikoy Morales), and Nar Cabico—a demented delight as their leader Senyor Blangko (alternating with Domi Espejo, also excellent)—their characters and motivations cry out for more insightful fleshing out than the flimsy outlines they currently inhabit.

You can guess by now that “Kung Paano Ako Naging Leading Lady” is a big, ambitious undertaking. Tom Stoppard once joked that any play that goes beyond 10 o’ clock is automatically self-indulgent. Fortunately “Leading Lady’s” gratification is, for the most part, the charming kind. While overstuffed, it is by no means a turkey.

Look more closely, for instance, and “Leading Lady” emerges as a fizzy brew of shrewd in-jokes and send-ups of the Filipino cultural landscape.

The Fuwerza as a dig at the show biz-mestizo/mestiza cult and their faux American accents (or British, in Madre de Dios’ case) is easy enough, but there’s more: The actors playing them—Giannina Ocampo, Caisa Borromeo, Jef Flores, Chesko Rodriguez, Stroem and Eckstein, and Lauchengco-Yulo—are, in real life, among the leading practitioners of English-language theater in the country.

But here they are, gamely going along with the parody, and the winking meta setup imbues the proceedings with an extra undercurrent of fascination.

There’s the inverse design informing the songs of Mely and Nena as rivals for Leading Man’s affection (“Why me?” wonders Mely, to laughs; “Why not me?” cries Nena later, to a hush).

Farce flies thick in numbers such as the Fuwerza’s ecstatic song-and-dance at news that “We have a maid! Yeah yeah yeah yeah!” (Or is that “yaya-yaya”?) “Chemical Q,” about the magic formula that gives the KayumangGilas their own superpowers (“mas swabe pa sa syoktong at Vino Kulafu!”), spoofs the slick sound of commercial jingles.

And when the glam gang appears in public, it invariably launches into a kitschy TV-variety-show dance number that ends with flag-waving and a treacly patriotic hymn (“We are the Philippines’ pride! Our mission to eradicate injustice, bring honor to the Filipino people, and to serve all mankind!”)

Hearing the disarmingly befuddled Dy sing these lines, or the hauntingly intense Escalante tear into “Kasalanan Ko,” a full-throated aria of despair halfway in Act 2, is to shiver in the presence of exquisite music-making.

Molina and Cabrera, both pint-size actors, match them with intelligent portrayals and powerful vocals. (In Molina’s case, it’s a virtual star turn; add this to her blistering performances in “Rak of Aegis” last year and “Manhid” earlier this year and she’s the breakout name of the moment. Playgoers, meet your newest leading lady.)

In between all these is an imaginative whirligig of more songs and dance numbers, combat scenes, nuns, orphans, trampolines, teleserye dialogue, middle-class cluelessness, the dignity and drudgery of work; even eye-popping abs courtesy of Stroem (his jazzy take on his solo is just as fetching) and, improbably enough, of Lauchengco-Yulo (51 and looking and sounding fabulous)—all ending on an anthemic but rather platitudinous note about, well, finding your own inner powers.

Martinez spins this sensory spree with a steady hand, the moments of genuine, tender feeling blurring seamlessly into the next set piece of comic folderol. Exuberance clearly carries the day through the bumps still evident, but as this musical further hones itself, in one respect it’s unimprovable: Its heart is in the right place.