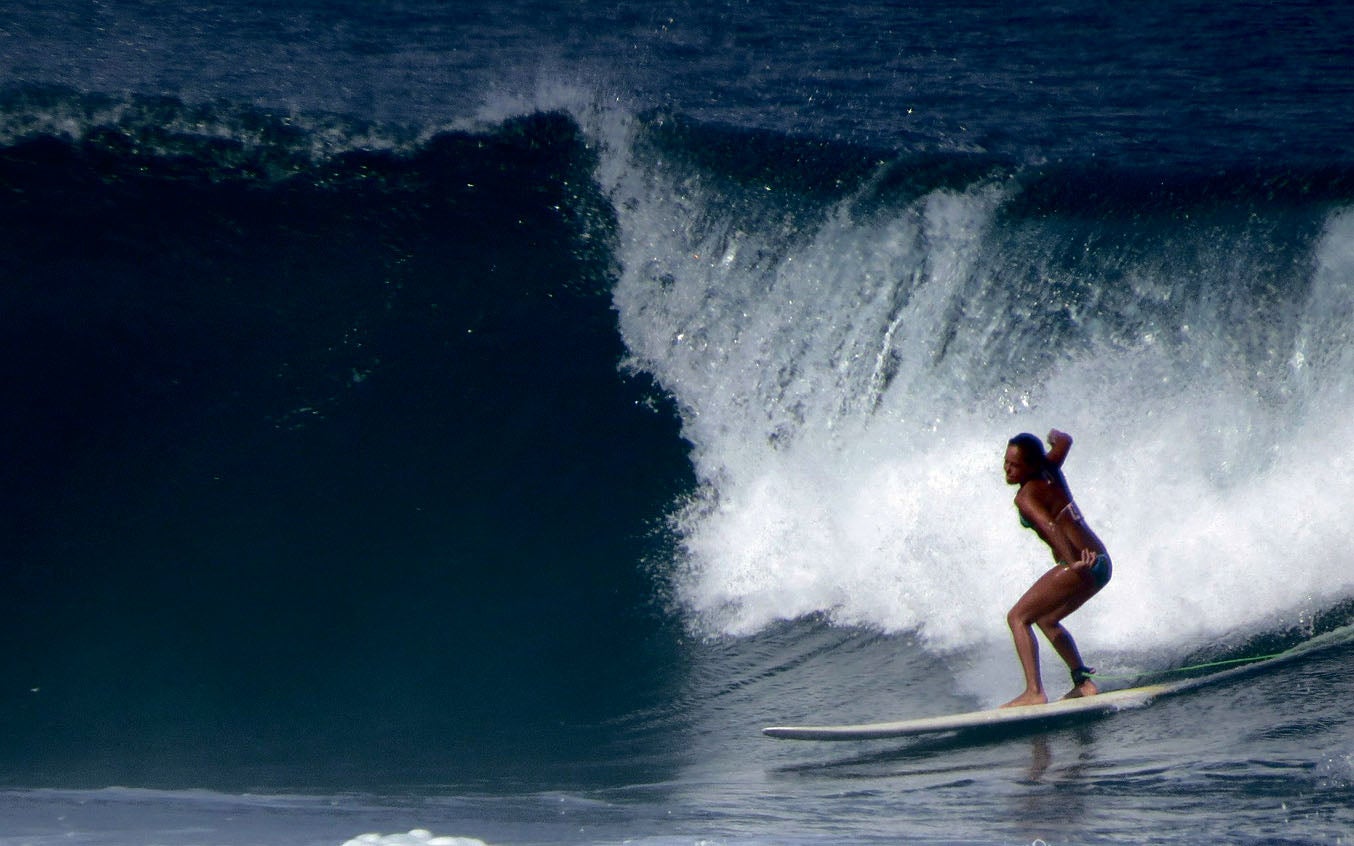 When she’s not acting, directing or planning events, Ana Abad Santos is paddling out in the waters of San Juan, La Union’s surf capital. Compared to chaotic city living, there are less distractions there.

Ana is content just gazing out at the horizon, attuned to  the rhythm of the sea, and catching a wave.

“When you’re surfing, you can’t think of anything. It’s just you. That’s what I love about surfing. It’s like therapy,” she says.

A beach lover, Ana first got into diving 20 years ago. But unlike going to La Union, where she can hop on a bus and alight on the surfing strip, getting to dive spots in Batangas was not easy. Moreover, diving was more high-maintenance, with the need to get equipment, rent boats and hire a guide or dive master.

Ana’s foray into surfing came when she was searching for another recreational outlet. “It came at a point when I was uninspired. Theater is like a marriage with its ups and downs. I didn’t know how else to continue with theater and what else to do. When the audience reach was not that great, you wondered if what you’re doing really mattered,” she recalls.

(Ana has since become a co-founder of Red Turnip Theater, which produces current, provocative plays that have been lauded by local critics.)

Three years ago, actress Mylene Dizon and celebrity chef JP Anglo got Ana hooked on surfing. Although riding a wave may seem like meditation, feeling that indescribable oneness with the sea, the physical demands are daunting.  Paddling out to sea, bobbing in to wait for a wave, catching it and recovering from the ride demand endurance.

Ana says the sport requires strong arms because, most of the time, the surfer is paddling to the surf territory. To keep fit, she practices pop-ups or maintaining stability on the Indo Board balance trainer, and does push-ups.

Beyond fitness, she likens surfing to “Eat, Pray and Love,” and “Wild,” memoirs about women who discover themselves through their journeys. “I got into surfing more for the wellness of my soul than my body. In ‘Wild,’ a woman tries to regain herself by walking more than a thousand miles on the Pacific Crest. I guess surfing was my Pacific Crest trail,” says Ana.

Surfing has brought her to famous surf spots in Pagudpud, Baler and Siargao. She enjoys Samar because of its low density. During peak times in La Union,  she has to compete with 50 other surfers to catch a wave. Ana also travels to Bali in Indonesia and to Japan to watch international competitions, ride the waves and bond with the surfing communities.

However, surfing has its risks.  She recalls a recent harrowing experience. “I thought I was going to die. We paddled out and got caught in a big wave. It was like being inside a washing machine. I didn’t know where up or down was and it was so dark. I could not hold my breath for long. Finally, I surfaced, but another swell was coming. They come in sets,” she says. (Swells are longer, rolling waves and move independently of the current wind.)

Last year, while rehearsing for Floy Quintos’ musical “Fluid,” Ana  got into an accident and returned limping after heel surgery. “The waves were fierce and high in Bali,” she remembers.

Despite the risks, Ana has found the Holy Grail in La Union. As part of San Juan’s surf community, she can recommend the best bars and restaurants along MacArthur Highway and other tourist spots.

She looks up  La Union-based Japanese surfer Chu Takahashi  for his tricks on the longboard. He also produces surfboards which she patronizes. With Takahashi as a business partner, they put up Switch Surf, a bungalow with a surf shop, for tourists. Rented out through Airbnb, the bungalow offers two rooms, a living room, dining area and kitchenette.

“If I don’t have work in Manila, I spend time in La Union. I thought I needed to do a little business. Besides, I want to share it with others. I want to build another set of clientele, people who don’t surf.  This is something that I want to do, stay on the beach,” she says. “The ocean is both humbling and nurturing, and I hope to help people discover that.”