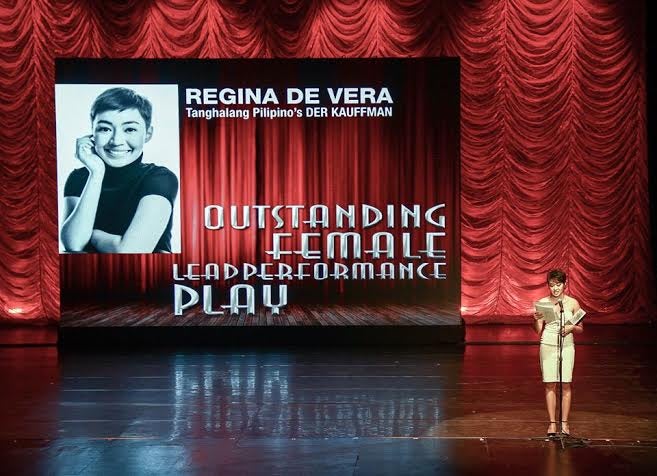 Regina De Vera, a resident actor of Tanghalang Pilipino (TP), has been accepted to The Juilliard School’s Masters of Fine Arts in Acting program.

She is one of 18 applicants admitted to the program out of 1,900 hopefuls from all over the world. Her first semester of a four-year course begins September this year.

While De Vera has received financial aid from Juilliard, it’s far from the total amount needed. “The aid is $28,000 but the total cost of attending (including housing, supplies, insurance, etc.) is $61,290,” she says in a Facebook post.

If she can raise the funds on time, she will have the chance to study in the school that has produced the likes of movie stars Robin Williams and Jessica Chastain (“Zero Dark Thirty,” “Interstellar”), TV stars Viola Davis (“How to Get Away with Murder”) and Elizabeth McGovern (“Downton Abbey”), and Broadway stars Patti LuPone and Audra McDonald.

De Vera has set up a page on Indiegogo.com (tinyurl.com/GoFundRegina), a crowdfunding site that allows people from around the world to donate to different causes or projects. The site collects a percentage from donations.

In order for De Vera to qualify for a student visa (due on June 15), she will need to show proof of funding of at least $33,000 or approximately P1.5M. Payment for the semester is due on Aug. 10.

While several Filipino classical singers, dancers and musicians have graduated from Juilliard, De Vera is only the third Filipino who will attend the drama program, after directors/acting teachers Ana Valdes- Lim and Orlando Pabotoy.

“Earlier this year, I gambled my childhood savings to fly to New York City to audition,” she writes.

Juilliard requires its international applicants to include a third monologue in their native language for the prescreening. De Vera did a Rolando Tinio Tagalog translation of Portia’s “The quality of mercy” speech (“Ang pagdadalang-awa’y hindi kailangang iatas”) from Shakespeare’s “The Merchant of Venice.”

If international applicants pass the prescreening phase, they are scheduled for in-person auditions in January.

“They let you perform only two monologues, but we were asked to prepare four in case they’d like to see more: two contemporary and two classical, preferably dramatic and comic, to showcase the applicant’s range.”

“I did St. Joan and Diana. For backup, I prepared the Portia speech and a contemporary monologue from Theresa Rebeck’s ‘Loose Knit,’ but was not asked to perform them.”

Juilliard also encourages applicants to prepare a song to be sung a cappella, just in case. “I had ‘Wouldn’t It Be Loverly’ from ‘My Fair Lady,’” says De Vera.

For the final round of callbacks in March, De Vera was asked to perform the St. Joan monologue again and to sing “Wouldn’t It Be Loverly.”

“We were told that we’d learn about the results via e-mail by April 1. I got back to Manila the evening of March 17. The following day, pagbalik na pagbalik ko sa Manila, recital agad! We were wrapping up a training workshop for TP’s Actor’s Company.”

She had received an e-mail from Juilliard’s administrative director that morning, asking for a phone call. “I called her when I got home from the recital. I was so afraid that there might be a problem.”

When told she was accepted, De Vera became confused. “I said, ‘Umm, sorry, I do not understand. I thought we would learn about the results on April 1? So wait, I’m in? I am admitted? I got in?’ I was rambling!” she says, laughing.

“I ran to my parents’ room where my dad was sitting on the bed and my mom standing. My mother hugged me, and my father, in his true loving fashion, congratulated me without getting out of bed,” she recalls. “I have a loving and unconventional family!”

“My life changed when I decided to audition for my high school’s drama club,” she recounts. “It set me on this path. I was an unusually quiet and reserved pre-adolescent then. The decision came as a surprise to my family and my high school batchmates. Never looked back since.”

She then joined Tanghalang Ateneo, one of the university’s theater groups, performing in Philippine works such as “Walang Sugat” and in both English and Filipino productions of Shakespeare plays and Western classics.

After graduating with several awards, including the Loyola Schools Award for the Arts (Theater Arts category), she auditioned with TP’s Actors’ Company, its resident pool of actors who are trained continuously throughout their stay with the group.

Her recent credits for TP include Rhoda in “Walang Kukurap” and Ms. Forsythe in “Pahimakas Sa Isang Ahente” (Death of a Salesman).

For portraying Portia in “Der Kaufmann” (A Filipino adaptation of “The Merchant of Venice”), she won the 2013 Gawad Buhay!, the Philstage Awards for the Performing Arts, for Outstanding Female Lead Performance in a Play.

She’s also done outreach work using theater as a tool for awareness and therapy for HIV-awareness for Unicef, and for calamity survivors of “Yolanda” (Haiyan)-affected communities for the World Health Organization.

“This opportunity comes rarely in the lifetime of an artist especially for someone born and raised in the Philippines. I am determined to pursue this path and hopefully make my country proud,” she says.