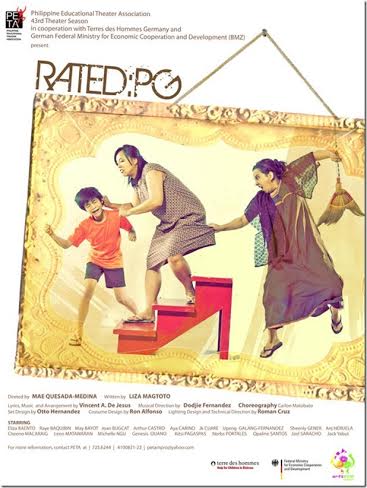 Artists like the members of the Philippine Educational Theater Association (Peta), the Dakila Collective, and celebrities like Cherry Pie Picache and Lotlot de Leon have joined the campaign to stop domestic violence and corporal punishment (especially with children as victims), and to increase awareness about children’s rights.

The battle cry is “Go Positive” and “Love Does Not Harm.” And the goal is “positive discipline.”

This was announced at a recent press conference at the Quezon City Sports Club organized by Peta, Plan International, Dakila and Child Rights Network. The project is supported by Terre des Hommes Germany, the German Federal Ministry for Economic Development and the European Union.

Distributed during the press launch was a primer, “To Spank or not to Spank,” which encapsulated the advocacy of the project: to promote positive and nonviolent discipline of children, and prohibit corporal punishment and all other forms of humiliating or degrading punishment for children.

The primer was published by the Philippine Legislators’ Committee on Population and Development, Unicef Philippines and Save the Children, an international nongovernment organization.

Beng Santos-Cabangon, Peta executive director, said the organization “has been working with schools, barangays and communities to increase public awareness of the need to protect the children from punishment.”

House Bill No. 4907, which protects children’s rights, has been approved, she said, as participants applauded, and added: “Now it is up to us to rally and see to it that it is approved in the Senate, and that children will grow up in a loving environment.”

De Leon said, “I really believe in positive discipline. Every child needs to be protected, to be treated with love. I have heard stories of kurot, sampal (children being  pinched, slapped) so I pray that this project reaches many people.”

Picache observed that “there is really a need for positive discipline. We must show  parents and grandparents that there are other options. The parents may both be working, but it’s a process; they have to give time to their children even if they are both working. Also, mga guro (teachers) in school [should also be informed].”

She added, “We can inspire other people if we practice positive discipline.”

Two young victims of corporal punishment—14-year-old Peta actress Lardin Agustin and scriptwriter Stephanie Murillo—spoke during the press conference. They recounted stories of being pinched and slapped by their parents, who now have changed for the better.

Distributed during the press lunch was a play in video form, “Rated: PG,” written by Liza Magtoto, stage-directed by Mae Quesada-Medina and video-directed by Maribel Legarda.

The story revolves around a low-income couple who are both working in the city. They have two children, a girl who becomes rebellious and a boy who gets into trouble in school. So the couple, Romy and Joselle, are confronted by the challenge to guide their children without repeating their own parents’ old way of scolding, shouting and spanking. How do they learn to teach their children without hurting them?

The project is up against the cultural practices of the older generation. But, hopefully, it’s a movement that will grow and take root.