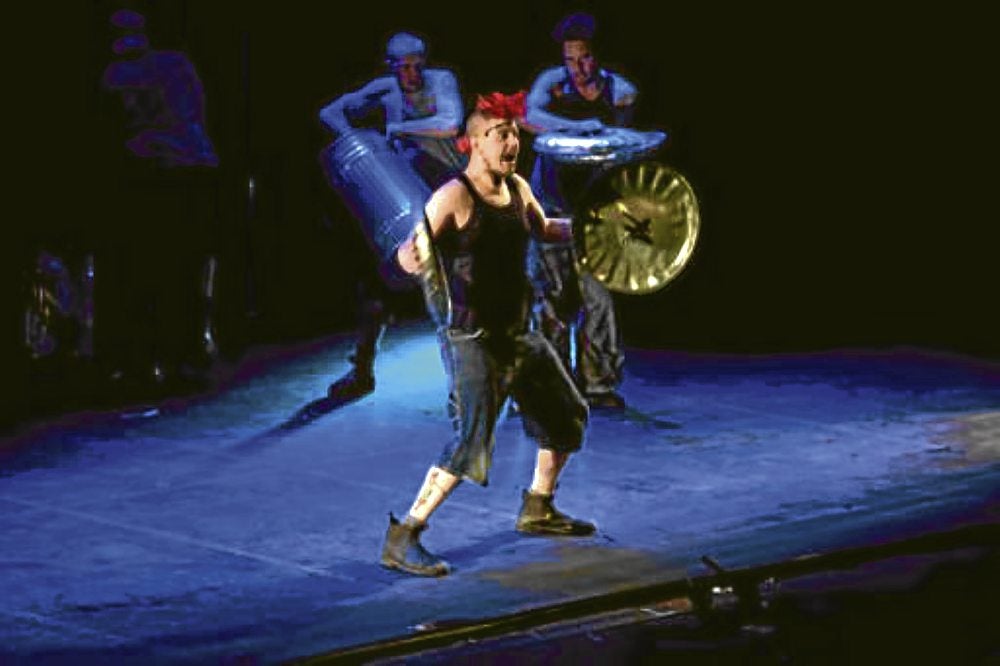 Pure stage magic out of Zippo lighters and kitchen sinks 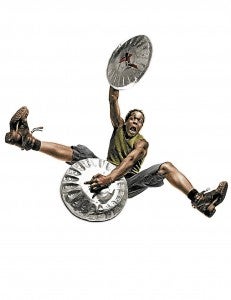 A relatively young audience on opening night of the “Stomp!” group’s maiden performance in Manila seemed to be in a Catch-22 situation.

The local “guinea pigs” with ages ranging from 3-50 years old alternated between laughter and expressions of amazement for the coolest rag-tag bunch of men and women on a Masonite stage.

Eight paint-smeared performers wearing singlets (vests), cargo trousers, well-worn boots and strong personalities looked as if they just came from a cleaning assignment. They combined dancer-seducing beats from junk, household and industrial objects with snazzy movement and goofy comedy for 1 hr and 40 minutes – without intermission – at Tanghalang Nicanor Abelardo (Main Theater) of the Cultural Center of the Philippines in Pasay City.

Their imaginative use of long-handled scrub brushes, matches, aluminum bins, Zippo lighters, folding chairs, kitchen sinks, plastic bags, newspapers and even their bodies evoked images of tap dancing (in this case, more like stomping) and sounds of energy-infused and mostly fast-paced tribal, jazz and samba music  impressively sustained and replicated in different ways.

Perhaps the use of recycled materials was also a timely challenge to the issue of waste – what with the ongoing financial crisis and age of austerity in some of the performers’ home countries in the West.

Leading the pack and the rhythm was dreadlocked Brit Nigel Clarke, who seemed to playfully boss and cajole the audience into being their ninth performer that night.

There was also clownish Angus Little from Australia, who was ironically very large. Melanie Joseph from the UK was the Amazonian queen in a tank top, while purple-head preppy Andrew Pang was from Hawaii.

Also memorable were the subtle humor of Austrian Johannes Bohun and body percussions by William Hickling, another Englishman, plus the hip-hopping antics of Canadian Troy Sexton and Gemma Shields,  also from the UK.

Alternating on other nights were Jeremy Price, Leilani Dibble, Michael Landis (US) and Peter Nielsen (Denmark). 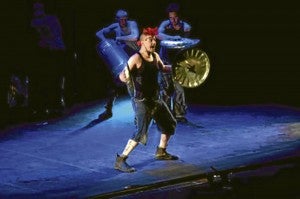 Favorite routines in front of a set that looked like someone’s garage of scraps included their use of long thin poles paired with combative choreography; actual dish-washing in water-loaded kitchen sinks hanging on their necks; and the part where the dancers were swinging in mid-air, harnessed to the backdrop-scaffolding, while they thwacked plastic drums, aluminum bins and pipes.

The latest additions to their show were also well-appreciated: the use of huge black tires that looked like donuts that they hit with sticks and strapped on their shoulders; and juggling and banging of paint cans, which felt pretty edgy to those who were watching because of the possibility of dropping one of the cans the performers were throwing to each other quite quickly at varied distances.

“Stomp” was created in 1991 as a result of a 10-year collaboration between Steve McNicholas and Luke Cresswell in Brighton, England. It has since grown to four companies touring simultaneously all over the world.

Locally, they have audience recall among moviegoers, thanks to the Dolby Surround Sound trailer at the start of each movie in cinemas, especially in Metro Manila.

It should be noted, however, that percussive “seduction” is nothing alien to those who have seen what homegrown talents such as Brigada Batteria and Escola de Samba de Manila bust out on their gigs.

It is also common practice that Filipino children would traditionally tap cans and other recycled instruments – even make sounds on their armpits – to go caroling during the Christmas season.

Standing ovation and shouts for an encore from all levels of the theater not only forgave a few missed beats and lighting cues by the “Stomp!” crew. It also underlined a well-known fact that any group can capitalize on: Rhythm is a universal language and understood by any age and any nationality.

“Stomp!” was brought to the Philippines by Concertus Manila and Visa, and mounted eight shows at the CCP. They will be performing in Hong Kong on October 25-November 6 at the Lyric Theatre of the Hong Kong Academy for Performing Arts.

Snippets of their older routines can also be viewed on YouTube.