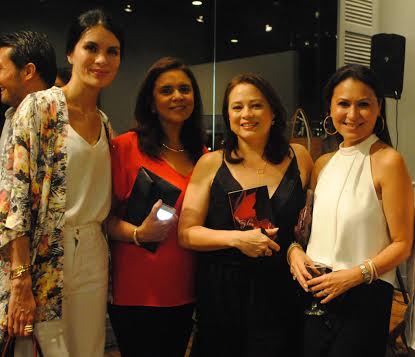 Guests were greeted by the Philippine Philharmonic Orchestra, no less, Ballet Philippines, and highly regarded Filipino singer Lani Misalucha, who was jetted in from Las Vegas where she’s now based.

An art exhibit provided a historical survey of the venerable cognac house.

“Hennessy will continue its global celebration by taking the art exhibit on a massive five-city tour with stops in locations associated with the history of the brand,” said Filloux. “Called ‘Hennessy 250 Tour,’ it recently kicked off in Guangzhou, China, and will proceed to Moscow, New York, Johannesburg and Paris. Contemporary artists Charles Sandison, Pierrick Sorin, Tony Oursler, photographer Anton Corbijn and Constance Guiseet have each created something that resonates and contains elements of the heritage of Hennessy.”

Steamy, sweltering, hot, hot, hot! We are talking about “Making Love in Spanish,” the first novel by journalist Bambina Olivares, who writes under the pen name “B. Wiser.” It is published by Anvil.

Is it a roman à clef? I asked her.

The answer made me buy not one but three copies.

The launch party at the chic Celestina boutique in Greenbelt 5 was like a homecoming for Bambina, who moved back to Manille for good with her two daughters after being away for some 30 years.

Audrey Puckett jetted into town for the occasion, and Tessa Valdes breezed in straight from the airport, surprising hubby Dennis Valdes, who was tied up in meetings in Quezon City all afternoon, and who’d sent his regrets for his wife and himself earlier that day.

Another surprise, dahlings, was the reading by the inimitable Louie Cruz, who chose an especially suggestive chapter, complete with some interesting four-letter words.

Louie paused every now and then to add his own naughty commentary, to the delight of the crowd.

Karina Bolasco, head of Anvil, reminded everyone that “our publishing house may be known for more serious books, but we have published some quite daring works of literature in the past,” such as those by psychologist and sex expert Margarita Holmes.”

Well, Bambina’s book covers the same ground, but uses fiction—and a lot of humor and wit—to portray an independent, global Filipino woman named “Maxine,” a woman who knows who she is and what she wants, and that includes the men she chooses to get involved with. (Coincidentally, palangga, they all turn out to be Latinos, Bambina’s type of man.)

Maxine rips through the stereotypes of Latin lovers but also reveals her disappointments and heartbreaks as she endeavors to live and love on her own terms.

“Making Love in Spanish” should have been titled “Shades of Red and Yellow.” (Available at National Book Store and PowerBooks nationwide for P450)

Grab a copy. If you’re not fluent in making love in Spanish, you will be by the time you finish the book.

Organized by the Department of Tourism (DOT) and Tourism Promotions Board (TPB), Madrid Fusión Manila featured Michelin-star chefs who were changing the landscape of global gastronomy, as well as Philippine chefs, the country’s colorful culinary history, and abundant local ingredients. It highlighted the Philippines as the best undiscovered gastronomic destination in the world.

Opening Madrid Fusión Manila was Tourism Secretary Ramon Jimenez Jr., who said, “I come this morning with something that is essential to any culinary exercise: an appetite for knowledge, discovery, lively exchange of ideas, making new friends, and for making history.”