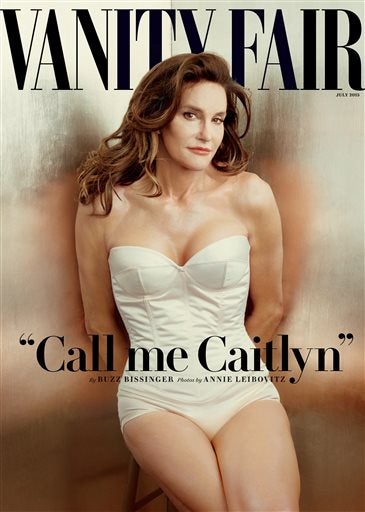 NEW YORK — The stealth Caitlyn Jenner cover shoot for Vanity Fair sprang from her chats with the magazine’s fashion and style director, Jessica Diehl, about inspirations ranging from Lauren Bacall to “The Thomas Crown Affair.”

In an interview released by the magazine, Diehl called Jenner “all-American in so many ways,” style wise.

“She has certain ideas about what she feels great in. But those ideas are still forming and taking shape. There will be some experimentation and trying things. Welcome to the world of women’s fashion! It’s not always smooth sailing, but I think she has a pretty good idea of what makes her feel good, and those are classic silhouettes,” Diehl said.

Jenner’s debut as Caitlyn for the July cover was released online Monday and will hit newsstands June 9. Downloads of an inside photo spread and the story written by Buzz Bissinger were made available.

The cover shows Jenner, formerly known as Bruce, seated, legs crossed, on a high stool wearing a Trashy Lingerie creamy corset and panties paired with the headline: “Call Me Caitlyn.” Annie Leibovitz shot the photo and several more with Jenner in a gold-sequin gown by Halston Heritage and another off-the-shoulder black number by Zac Posen.

In fresh interview excerpts posted Tuesday on the magazine’s website, Jenner acknowledged some nerves over how the photos would be perceived but said they turned out “over-the-top great” and have been warmly received.

Jenner wore a tight Donna Karan New York red mini-dress for one shot that had her in the driver’s seat of the $180,000 Porsche purchased for Bruce Jenner by ex-wife Kris Jenner. Other photos showed her in a black lace corset by Agent Provocateur and a top and skirt by Herve Leger as she lounged on the couch of her Malibu, California, beach house.

“She has a fantastic physique. It’s just a totally well-taken-care-of physique. She’s an athlete, so the muscle tone is incredible. She’s slim, and her proportions are very easy to dress,” Diehl said in the question-and-answer format interview.

READ: Why Caitlyn Jenner is already our favorite girl

“I think they were pretty smart not to go into recent runway fashion or any of the 8,000 super-cool designers of the moment that Kanye and Kim are such enthusiastic supporters of because this reads as a personal story,” he explained Tuesday, referring to Jenner’s stepdaughter Kim Kardashian and her husband, a designer himself.

Diehl, who has worked numerous covers for the magazine, said she didn’t have long to style Jenner because of the need for extreme secrecy.

“Normally we go to, I don’t know, Valentino or Armani, and say we are shooting a cover and ask if they can give us some clothes (to borrow). For this, I had to go into stores incognito, so to speak — not like anyone would know what I looked like anyway — and buy stuff. That was actually what was fun. It was like Vanity Fair: Off the Rack.”

Diehl did sit down with Jenner at her Malibu home for a couple of hours to talk style and inspirations.

“Coming from a very fashion-forward family, we sort of thought that the nicest thing to do was to focus on style over fashion. Nothing too bling or too shiny. Kind of keeping it more in the style arena rather than hardcore fashion arena,” she said.

The cover was quite deliberate, Diehl said, considering the months of intense scrutiny leading to Caitlyn’s grand unveiling.

“It had a lot to do with the idea that there is so much artifice everywhere in the world and the world of red carpet dressing, and even with magazines, there is artifice in everything we do. That can be wonderful because it is fun,” she said.

“But there was a stripped-down idea there that sort of felt like underneath all of this excitement and newsworthiness is the soul of a woman. And that didn’t need a lot of covering up. It was not meant to be risque in any way. It was really meant to sort of show with all honesty and purity, ‘This is what is going on. Here I am.'”

Wilson said those signals were delivered loud and clear. The cover, for him, conjured Marilyn Monroe on the beach, a classic bombshell image of “what femininity has been in our society.”

“They really did not take advantage of this person, which is very admirable,” he said. “It’s a very clean, elegant way to tell that story.”