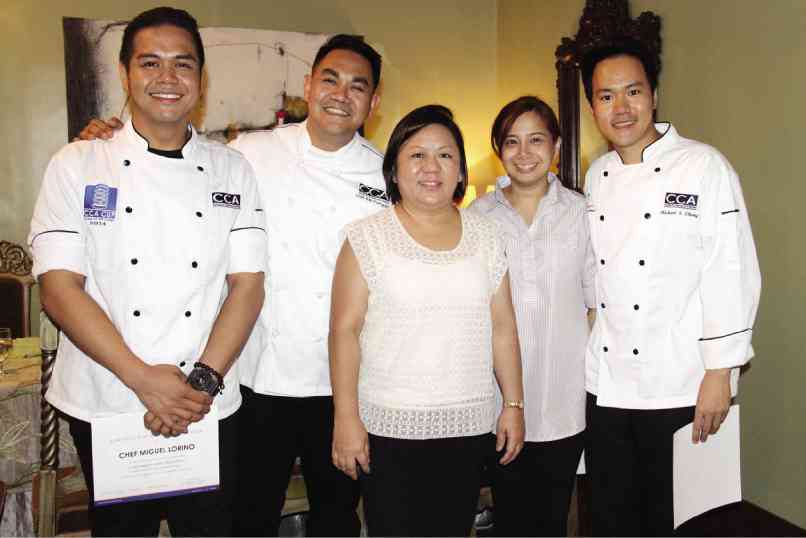 They all went well-prepared, confident they would bring home the bacon.

Three chefs—Miguel Antonio Lorino, Michael Cheng and Kerwin Mark Funtanilla—brought not only pride to their school, the Center for Culinary Arts (CCA), Manila, but honor to the country as well.

Lorino bagged gold with distinction (meaning perfect score) in the Golden Bauhinia Cup and silver for the Professional Western Cuisine Grouper category, besting more than a dozen chefs from Taiwan, Malaysia and Singapore. Silver was the highest award given in the grouper category.

Cheng also won silver for the Modern Chinese Cuisine Hot Cooking Pork Loin group. He bested 40-plus chefs from Taiwan, Hong Kong and Macau for his contemporary take on a Chinese pork dish. Silver was, again, the highest prize for the said category.

Funtanilla got bronze in the Professional Western Cuisine Beef Short Ribs class. A total of 45 chefs from Korea, Hong Kong, Macau, China and Thailand competed in the beef category, and Funtanilla made it through.

“Joining international culinary competitions has always been our way of benchmarking with the best,” said Badjie Guerrero-Trinidad, chief executive officer of Cravings Group of Companies.

The team, headed by chef Annali Mariano, started practicing for the Hofex tilt as early as last February. Each chef came up with his concept and presented it to coaches-slash-tough critics—chefs Sau del Rosario, Josh Boutwood, Jerome Valencia and Melissa Sison-Oreta.

“I needed to kill about 18 pieces of lapu-lapu to perfect the cooking time,” disclosed 27-year-old Lorino, who is also a registered nurse. “It was also difficult to guess the type of grouper they use in Hong Kong. There are different kinds of grouper.”

That became the biggest challenge for Lorino the moment he stepped into his counter and the time started at once. The fillet was an inch thicker compared to the ones he often used for practice in Manila. He couldn’t afford to undercook or overcook it.

Another challenge was the sealer for the sous vide machine, which they brought all the way from Manila. The machine failed to function at the event.

“I had to leave my station and went to the common sealer for the sous vide machine,” said Lorino. “My greatest fear then was to serve raw fish. The judges could spot it right away.”

Good thing everything worked out well with some adjustments here and there— cooking the fish an additional five minutes with lemon zest and garlic, for instance, and cooking the paella for 20 more minutes with fish stock and crab fat.

Lorino was supposed to compete only in the grouper category, but because of his exemplary performance he was told last-minute by Hofex organizers that he automatically qualified for the most coveted Golden Bauhinia Cup on the last day of the competition. Only five chefs vied for the Bauhinia Cup—three from Hong Kong, and one each from Malaysia and the Philippines.

The team immediately scoured the grocery stores in Wan Chai to help Lorino create the finale dish. Prepping until 3 a.m. was not a joke, but the challenge of getting gold pushed the team to its limits.

The pressure was all worth it when Lorino’s name was called as the grand winner.

The group joined only three categories but won four awards. The highest award, gold with distinction, was awarded not only to Lorino but also to CCA Manila.

The Hour of the Pig

After winning gold in the Hofex lamb loin category two years ago, Cheng grabbed the silver award this year for his modern pork loin dish called The Hour of the Pig, a hodgepodge of pork roulade with soy a l’orange glaze, butternut squash-ginger coulis, matcha espuma and stuffed cabbage machang.

Different cooking preps and techniques went into this dish, such as French for matcha foam, Korean for the nori wrapper infused in the roulade and Chinese for the lotus root crisps, among others.

Cheng, likewise a registered nurse who took up culinary arts as his second course, personally chose the pork loin category because he knows how versatile pork can be especially when flavored with spices.

The pork loin was flattened, filled with forcemeat or blended meat combined with seasoning and nori sheets and rolled, then topped with lotus root sheet.

He prepared the dish in three similar plates for the judges, for tasting and for display. Unlike other competitors who preferred white plates in presenting their dishes, Cheng opted for black plates to make his food stand out, which helped further impress the judges.

All throughout the 60-minute contest, Cheng was composed and confident. One could hardly see that he was having trouble with his own pan.

“We brought our own searing pan, but it didn’t work in the induction stove so I had to make do with whatever pan they had there,” said Cheng. “I know glitches do happen, but it’s always up to you how to work around it.”

Cheng, who’s currently Cravings chef de cuisine for Asian restaurants, finished his work five minutes before the time was up and left his station with a smile on his face.

“I wanted to have a story behind it. I remember what it was during my Boy Scout days holding campfire in and outside school,” said the 33-year-old Funtanilla.

He didn’t want it to be strictly barbecue, so he braised the beef in figs and coffee, and placed it inside the bone marrow. It was a rich and flavorful dish, with sidings of jalapeño-flavored cornbread, cherry tomatoes and Monterey Jack cheese.

The available beef, however, posed a slight problem. It was thinner than usual with lots of fat. He tried to work on it, searing and braising the beef and then presenting it beautifully to the judges.

“What I learned from the experience was that although you have a general action plan, you must also be flexible whatever happens along the way,” said Funtanilla.

Trim the lamb loin. Rub with olive oil, pepper and rosemary. Roll and secure in a cling film. Seal it in a vacuum pack. Sous vide for 35 minutes at 65°C. Remove vacuum pack from sous vide machine. Coat with honey mustard then roll in roasted nuts.

Boil sugar, water and lemon until syrupy. Finish with cream.

Blanch peas in a pot. Pour in a strainer to remove liquid. Place green peas in a container. Using a food processor, puree green peas. Add cream. Season with salt and pepper.

Place portobello mushrooms in a pan. Season with salt and pepper. Put in the oven for 10 minutes at 170°C.

In baking pan, put figs and butter. Season with salt and pepper then roast for 5 minutes in a 170°C oven.

Place shallots in a baking pan. Pour in olive oil. Bake in the oven for 2 minutes. Assemble everything in one plate.