Joanna Preysler and Raul Francisco–in sickness and in health, in exercise and in play | Inquirer Lifestyle ❮ ❯ 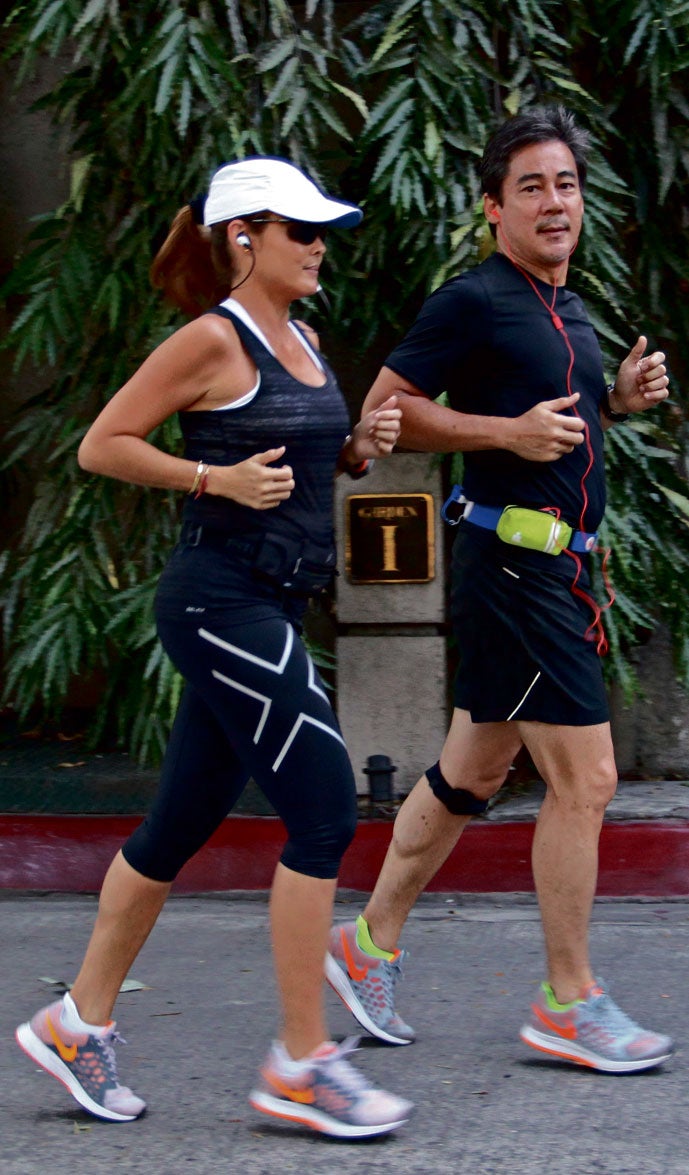 “HOW MANY couples can walk and run together, have coffee and chat? That is how we start and end our day,” says Raul Francisco, here with wife Joanna exercising in their village. PHOTO BY KIMBERLY DELA CRUZ

Joanna Preysler and Raul Francisco–in sickness and in health, in exercise and in play

One of Manila’s stylish couples, Joanna Preysler and Raul Francisco, start their day together by running several kilometers around their neighborhood to build stamina for a marathon.

This productive and beneficial morning run would be followed by coffee and conversation. Then they go to their office, but have lunch with their six-year-old son, Diego, at home.

In the evening, the Franciscos have dinner with the rest of the family—Monica, 21, and Emilio, 16.

Joanna and Raul make sports a regular date. “Exercise enhances our friendship and team effort,” says Joanna. “Although running is an individual sport, we see it as team effort.”

Raul adds: “You go through many different walls in running endurance races. When you’re tired or dizzy, she checks, ‘How is your heart rate?’”

The dynamics of exercising together is like a microcosm of their relationship.

“We are both active partners,” explains Joanna. “Our life together is exactly where we want to be. Nothing is perfect, but it’s perfect in its imperfections.”

Joanna looks up to her husband as the visionary. Raul credits his wife for bringing good luck to the business and making it grow.

Both have been into fitness since their school days. Joanna was a swimmer and tennis player, while Raul played football. Working out together is the most natural way for them to connect and share their passion.

Early in their marriage, they took diving lessons together; the couple went diving in 250 spots until Joanna’s pregnancy with Diego.

The foray into marathon running began with the simple pleasure of walking the dog together.

Then the couple started joining short marathons and half-marathons, until they finished two marathons in Nuvali.

Not wanting to be one-hit wonders, they decided to push themselves further and joined the Paris Marathon last April.

Asked how they fared, Raul, 54, says he and Joanna are realistic about their age. They clocked in over five hours after braving challenging conditions, such as pounding cobblestone streets, and enduring hot-and-cold weather. Some people stopped in the middle of the race due to injuries, or collapsed and were brought to the ambulance.

Joanna, eight years his junior, finished ahead of Raul.

“When you hit 28 kilometers, it becomes a grind. It’s all in the mind. You realize what you’re made of,” says Joanna.

The impact of the stony streets hurt Raul’s knee; he had to hobble toward the last stretch. Still, his morale was boosted by friends and relatives who flew to Paris to cheer for the couple.

Raul’s ordeal didn’t end at the finish line. After the race, he had to climb five floors to their rented apartment.

“In Paris, we were neck-and-neck until he got into a slump. I ran faster. But now he’s got his second wind. I eat his dust when he runs,” says Joanna.

“We can beat each other, and I’m fine,” says Raul.

Plans are afoot to join the Tokyo Marathon next year.

“It’s a commitment, especially if we have businesses to run and children to take care of. You have to set time for it and be focused. Raul says respect the distance that you are about to do,” says Joanna.

The couple undergo a regular heart checkup, log in 60 kilometers a week, then build up their distance and time three months before a marathon. They get ideas from the running community on improving time, speed, technique and how to remain hydrated.

Having endured their joint exertions, they share what they consider the secrets of compatibility for couples who exercise together.

“Raul is the structure guy. He taught me to set goals and how to have a road map. I’m the peanut gallery, one who brings comic relief on the side,” says Joanna. “Apart from being parents, business and workout partners, we have to set aside time for ourselves as a couple.”

Their shared sport serves as a model for their children. “We want to impart to our kids that when you have a goal, you need the heart and stomach to see it through. Even if you have a tough week at work or you feel like you’re not feeling well, it doesn’t change the fact that you have to train. It’s all about commitment,” she says.

“People comment that you spend too much time together. You need some breathing room. But for us, it works,” says Raul.

Off-hours, Joanna meets up with her girl friends and her eldest daughter. Joanna also gives her husband alone time to be creative.

“There’s so much convergence in our lives, but we are not in each other’s shadow. I am my own person. So is he,” she says.

Their sport is complemented by their healthy lifestyle. Breakfast is a green smoothie of kale and fruits, followed by a lunch of quinoa, vegetables, salad, soup and chicken. On cheat days, Raul enjoys a steak while Joanna gives in to chocolate.

Their diet is enhanced with supplements that provide the essential nutrients their individual body compositions require.

After a stem-cell treatment at Medical City, Raul observed that his first marathon clocked in at six hours. On his second marathon, it was down to four hours and 57 minutes.

“I feel so much energy, and my focus has improved,” he says.

Joanna feels rejuvenated and looks younger than her age.

“We have a zest for living, learning and adventure—and we include the kids,” says Joanna.