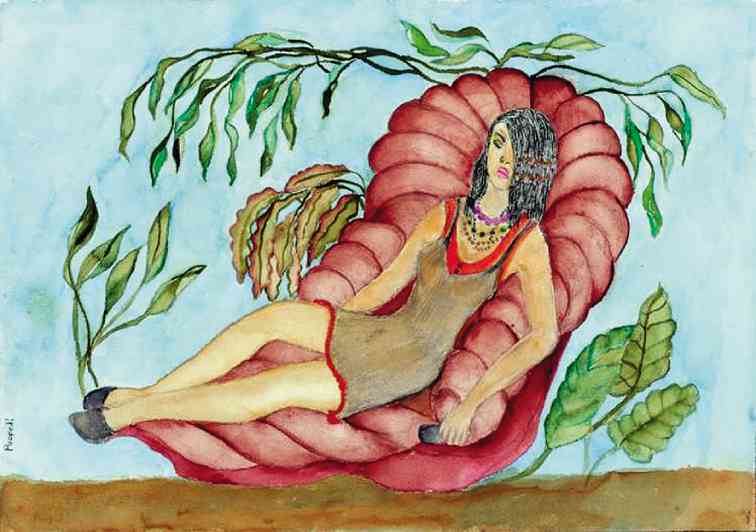 All my life I did my work in bed. Since I have ever and always handwritten my manuscripts (that’s why they’re called manuscripts) I used to do them prone in bed. I think I must have written at least 50 stories and essays in that position. When I needed to think out a part I would just roll face up and it would come.

Maybe all this bed-is-best business began because when I was little, come bedtime, my father would read me a fairytale or the comics while I snuggled beside him in his bed. It was daddy time and I was daddy’s girl (the only child for a long time). My mother was a great cook but I hated food because it was always being forced on me and my daddy and we had such small appetites. So mommy was out.

Bed when I was married meant other things—magic and circus. It was great times but now just nostalgic times.

Bed never meant rest time. It’s the best place to recall all the things you have to do for the day and schedule them. I sit up for 10 minutes for my pills and my breakfast of hot chocolate and pinipig, then I slide back in. Then I buzz for the maids, all three.

I am an executive in bed. I am a buzzer queen. B for Beni the cook, A for Aiko, M for Michelle. Nag-doorbell ho kayo? Everyone gets her instructions for the day to list down on their own personal paper stick-on to be pasted on a post so I can scold them if they missed something. No more toilet paper? Johnson’s Baby Powder? Did the cook buy fresh corn? Peanuts to boil? Are the grandchildren home? What’s their breakfast? Was drinking water delivered? Wax the whole floor! I even have a whistle hanging under the window beside my bed. One night I tried to test the whistle and blew it with all my might. No one came. Oh, well. Tell Gilbert to gas up the cars. Who rang the gate bell? When my friend arrives, seat her in the sala. Get my bra! Get my shoes!

I just visited an old friend, who’s about my age, last week. She was my neighbor and best friend when we were teenagers. She was lying in her nice bed with printed bed covers, doing nothing. She’s not ill. I know she doesn’t read—books or magazines or anything, and they said she never watches TV. What does she do? Nothing! her yaya said. Oh, she sleeps. Is she depressed? Tila hindi po. Does she not worry? No, her daughter does that for her. She never goes out? Well, once last week. Her husband’s pension that she was receiving needed a “proof of life.” So she had to show that she was living. Then she went right back to bed and slept some more.

To each her own. I wish sometimes my mind would stop working, thinking up columns and imagining paintings, and let me rest. Meditate deeply as when I was much younger. Dive into the core of my soul. But I am a creature of habit that forces me to keep deadlines and that’s not good either. Action is an addiction just as lethargy is.

My bed habit got more protracted some years ago when one of my sons sent me a big screen TV and had it installed right in front of my bed. Lying down was no longer just for work. No more watching in the sala. I watch lying down. Then I discovered that you could download from the computer any old movie you wanted and store it in a small device called a USB. Since I have a bias against TV programs I now have an alternative, to watch any movie I remembered from the ’50s to the recent past.

Here are some of them.

“A Streetcar Named Desire” 1951—You can see the difference in looks between the young Marlon Brando in this movie and the aging Brando in “The Godfather.”

“Dial M for Murder,” 1954— An elaborate plot by her husband to have his rich wife killed miscarries. (Wonder why anyone would want to kill someone as beautiful as Grace Kelly.)

“Anastasia,” 1956—Is the amnesiac Anastasia the real Romanov princess? It doesn’t matter to me as long as Ingrid Bergman ends up in the arms of Yul Brynner.

“The King and I,” 1956—I fell in love with Yul Brynner in this movie, and as Ramses in “The Ten Commandments,” and as the General in “Anastasia.” He died in 1985, and is waiting for me in heaven.

“One Flew Over The Cuckoo’s Nest,” 1957—In this endearing movie it wasn’t Jack Nicholson who survived the cruel mental institution but the big Indian, “Chief.” Out of pity Nicholson, rendered useless by electric shock treatments, is smothered to death with a pillow by “Chief,” who escapes the cuckoo’s nest.

“The Innocents,” 1961—A film on possession (frightening!)

“Kill Bill 1-2,” 2003—A really gory and amoral movie that involves a pregnant bride who was gunned down during her wedding rehearsal. Shows the Asian martial arts still new at the time. Unforgettable characterization and plot.

Enjoy or get frightened!