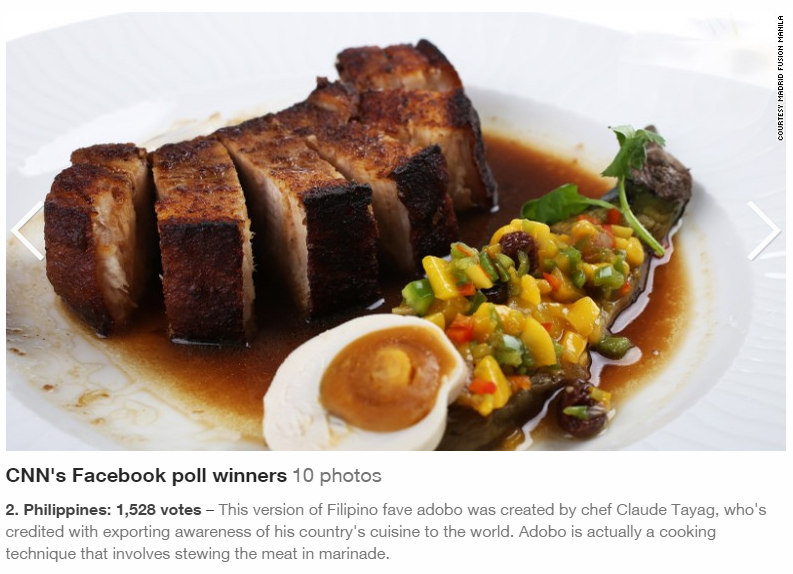 CNN features the Philippines' adobo in its listing of best food destinations in the world. Screengrab from CNN.com

In the same manner that “a way to a man’s heart is through his stomach,” the way to get to know a nation’s culture better is through its cuisine.

This was CNN’s message in its latest listing of culinary hotspots, where the Philippines was hailed the second best food destination in the world.

“Blessed with an abundance of seafood, tropical fruits and creative cooks, there’s more to Filipino food than the mind-boggling balut (duck embryo),” CNN said in its report on Monday.

The CNN report highlighted the world-famous adobo, which it said was originally Mexican that Filipinos devised as a cooking method.

“Adobo, for instance, is an ubiquitous dish whipped up in every household in the Philippines. It’s Mexican in origin, but Filipinos found that cooking meat (often chicken and pork) in vinegar, salt, garlic, pepper, soy sauce and other spices, was a practical way to preserve meat without refrigeration,” the report said.

CNN also cited festival mainstay lechon or roasted pig: “Lechon, meanwhile, is the Philippines’ most popular party guest. An entire pig is spit-roasted over coals, with the crisp, golden-brown skin served with liver sauce, the most coveted part.”

Eight of ten countries in the list are from Asia.

“Filipino food isn’t as well known as the other cuisines on this list, but with more than 7,000 islands and a colorful history, this archipelago has some delicious dishes of its own,” the news website added. RC