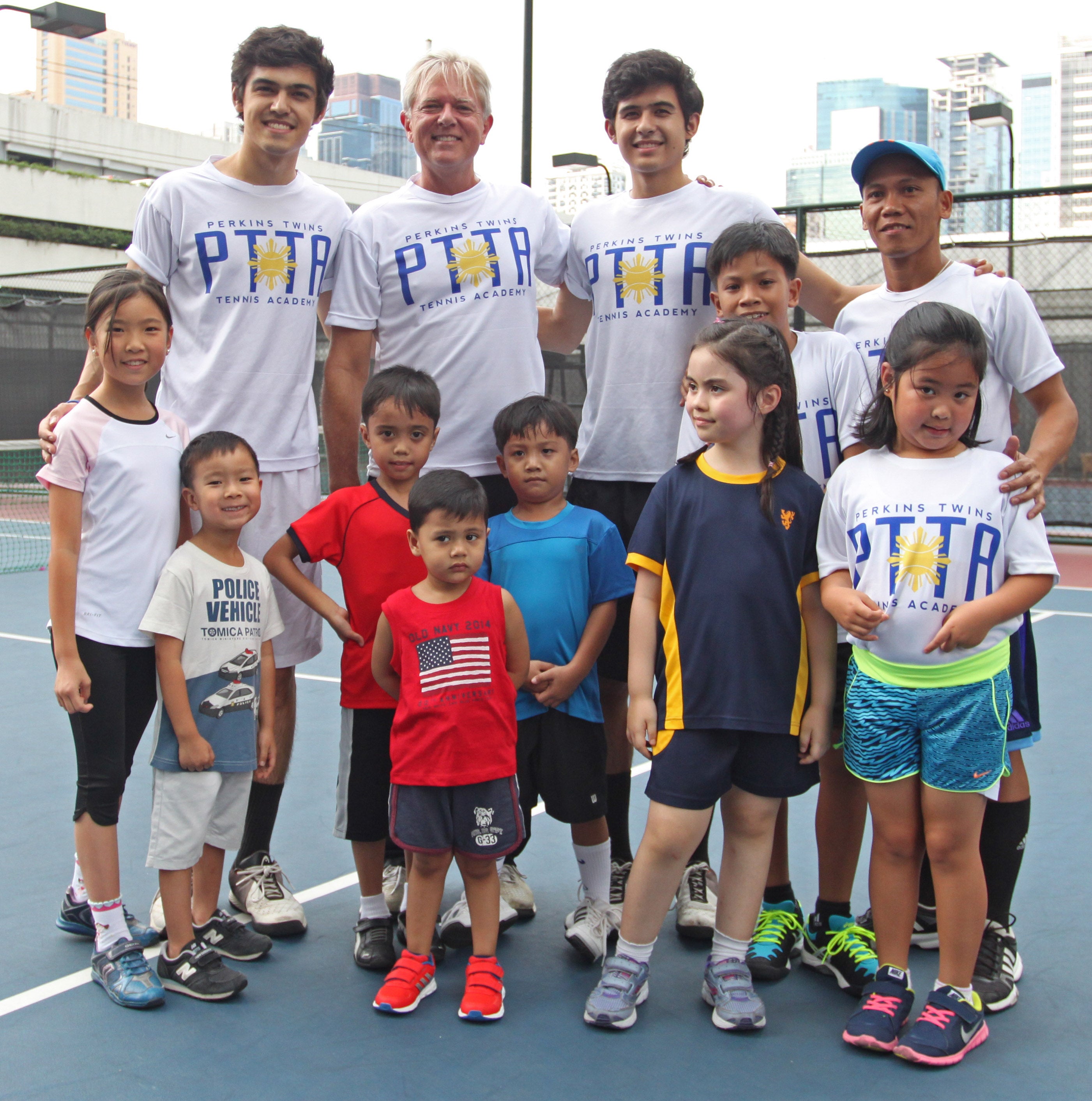 Tarny Perkins with the twins and their students. PHOTOS: KIMBERLY DELA CRUZ

In this era of athlete worship, do sports really build character—or reveal it?

“Each one of us has a natural instinct for how we deal with events, moods and relationships with others. Sports entail all of our emotions, and that’s why you see the best and worst of the human spirit through our athletes,” said Tarny Perkins, former touring tennis pro who believes in creating champions on and off the tennis courts.

Perkins, who founded the Perkins Twins Tennis Academy (PTTA), has been training young Filipino tennis players to become world-class athletes at the academy.

The bottom line, he continued, is that sports can have a very positive influence on character development. Winning and losing, for instance, are discussed in the academy. Through positive reinforcement, the young students gain confidence and begin to believe in themselves and in their game.

Perkins is married to former Cathay Pacific flight attendant, Filipina Tess Pazziuagan-Perkins, whom he met as a passenger. PTTA is named after their twin sons, Jesse and Christian, who are Grand Prix doubles champions in California. The twins assist their dad at the academy. “We want the Perkins twins to become to tennis what the Younghusbands are to football,” he said.

Sports on their own may not build character, but properly guided, well-intentioned mentoring can. At the academy, Perkins, who is a devout Christian, instills in his students the importance of putting God first in their lives (whatever their religion may be), of respecting their parents or guardians, and respecting everyone else.

“For us, tennis is more than just a sport. It’s a way to develop self-esteem and character. So we take away the last name, politics, and all that stuff which typically drive sports,” he said.

You play tennis like you do a game of chess. In a split second, you decide on angle and velocity, for example. Hence, tennis has been known as an intelligent person’s sport. Perkins said that studies in the US college teams confirmed this. Tennis players tend to be the smartest among athletes, and children who play tennis do more social work, get higher grades, and are more interactive.

In just three years since its opening, PTTA has seen its students win tournaments. The school has a partnership with the University of California, Berkeley (UC Berkeley). Each year, Men’s Tennis Associate Head Coach at UC Berkeley Tyler Browne visits and assesses the players.

Browne is one of five coaches in the United States, Perkins said, who is working directly with the US Tennis Association, mandated with taking a core number of young men to the highest level. During his visit last year, he evaluated the students and picked a couple who have the potential to become big in the world rankings.

Kids in the elite program who typically get to the quarter finals are now getting into the finals or semifinals.

“It’s confidence. If you don’t think you can win and if you don’t have the will to win, it doesn’t matter how much training you’ve had—you’re still not going to win. So we tell kids you can do anything. There are no boundaries to what they can achieve,” he said.

But in a country like the Philippines, whose guarded culture normally does not give many pats on the back, Perkins’ biggest challenge was boosting his students’ confidence through consistent positive reinforcement.

A typical Filipino child coming to class for the first time, for example, will not look him in the eye upon introduction. In most cases, he’d be lucky to get a word out of their mouths. “I understand it’s a cultural thing, like a show of respect, but if you’re going be a leader and move up in this world, eye contact is the single most important thing you can do,” he said.

After a few sessions, though, Perkins is amazed at how his students’ characters are transformed. They not only look him in the eye when they speak, but they speak full sentences. A lot of sentences.

“Being an American, we are loud about it. A tennis game can last a whole hour here in the Philippines, and only five words can be exchanged. When we teach for an hour we probably have 500 words said, such as ‘good job,’ ‘great shot,’ ‘wow,’ ‘way to go,’ ” Perkins said.

Another cultural disadvantage, he said, is the Filipinos obsession with whiter skin. This is especially true for female students. One girl, he said, who was evaluated by Browne to have the potential to become a world-class pro, was pulled out by her dad on the account of her darkening skin color.

Perkins said that after several reconsiderations, she was put back on the program, provided she trained indoors.

“Filipinos are very athletic. If we can train them to jump serve or jump volley, they can instantly raise themselves three to five inches. So now they’re much taller. If you put in the athleticism, desire, intelligence and competitiveness, you have the potential to become world-class. That’s our belief. There’s nothing that would hold back the Filipino from becoming the world’s no. 1,” he said.

The academy has a long way to go, though. Perkins said he and his team also need to change the way tennis is taught in the country. There are no Filipino champions, he said, because none of them could play the way it’s taught all over the world.

For instance, he noticed that every ball is hit off the back foot. While that’s a common problem, it suggests a lack of preparation and affects the balance. Proper training will correct that.

“What we’re doing is a cultural shift in every single way. This shift is not going to happen overnight,” Perkins said.