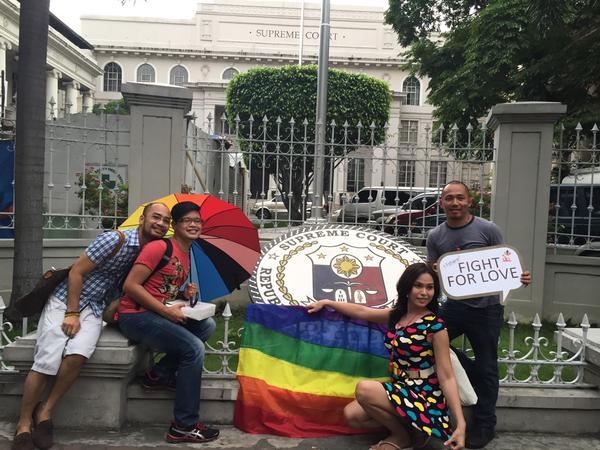 MANILA, Philippines— Several hundred gays, lesbians and transgender people held a Gay Pride rally Saturday in the Philippine capital to push for LGBT (lesbians, gays, bisexuals and transsexuals) rights and to celebrate the U.S. Supreme Court decision recognizing gay marriages in all U.S. states as a victory for their cause.

About 500 people marched around Manila’s Rizal Park, many carrying placards and streamers saying “Fight for Love” and waving rainbow banners. Some came with pets dressed in rainbow costumes.

Jonas Bagas, executive director of the pro-LGBT rights group TLF Share, said the U.S. court ruling “will reverberate in other corners of the world.”

The rally was scheduled to commemorate the 1969 demonstrations in New York City that started the gay rights movement around the world. Bagas said the U.S. court’s decision on Friday made it more significant.

He said that in the predominantly Roman Catholic Philippines, where the church has fiercely opposed gay marriages along with divorce and artificial contraceptives, he expects the “conservative majority” to continue to block human rights for LGBTs.

“We hope that after this decision, the struggle for equality can be reframed to go beyond marriage equality so that we can address other dehumanizing situations that LGBTs encounter,” he said.

Sylvia Estrada Claudio, a gender rights advocate and professor of women development studies at the University of the Philippines, said the decision was also “a triumph for feminism” because of the “intimate connections” between discrimination based on biological gender and discrimination based on sexual orientation, gender identity and expression.

“I can’t help but note that the three women justices voted for marriage equality, forming a solid core in what was a close vote,” she said.

Same-sex unions are not legally recognized in the Philippines because the country’s civil code limits marriages to a man and a woman.

A gay lawyer, Jesus Nicardo Falcis III, has challenged the constitutionality of the civil code provision on marriage, saying that the constitution does not define marriage solely as between a man and a woman and that the family code itself does not require a married couple to have children or the ability to procreate.

The U.S. court’s ruling “touches the very heart of same-sex relationships: that now you can marry and live with the one you love, your union protected by the legal mantle of the state,” said Danton Remoto, chairman of the LGBT Party List.

Remoto said attaining recognition of same sex marriage in the Philippines may be achieved partly by working for an end to discrimination not just against LGBT people, but also against indigenous peoples and persons with disabilities.

Archbishop Socrates Villegas, president of the Catholic Bishops Conference of the Philippines, said in a statement that the church will continue teaching that marriage “is an indissoluble bond of man and woman.” He said, however, that the church won’t discriminate against LGBTs.

The church will study the U.S. court’s decision “with assiduousness, and revisit our concepts and presuppositions, always with an eye to being faithful to the Gospel and to the mission of the Church,” Villegas said.