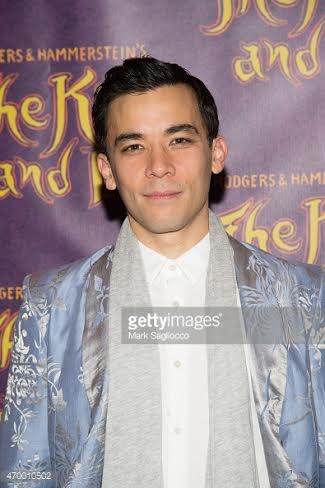 Conrad Ricamora at the opening night of “The King and I” last April at Lincoln Center. PHOTO BY MARK SAGLIOCCO/GETTY IMAGES

Filipino-American actor Conrad Ricamora created quite a stir on network television when he played Oliver Hampton, an IT guy seduced by main character Connor Walsh (Jack Falahee) on Shonda Rhimes’ freshman drama “How To Get Away With Murder.”

While most of the Internet know Ricamora from his recurring stint as Oliver on the TV series, he is also popular in New York’s theater circles for his critically acclaimed role as Ninoy Aquino in the well-received interactive musical “Here Lies Love.”

Recently, he donned the silk trousers of Lun Tha, the scholar with a tragic love story in the 2015 production of “The King and I.” The new staging of the Rodgers and Hammerstein classic stars Ken Watanabe and Kelli O’Hara and has bagged four awards in the recent Tony Awards, including “Best Revival of a Musical,” “Best Leading Actress in a Musical” (O’Hara), “Best Featured Actress in a Musical” (Ruthie Ann Miles), and “Best Costume Design in a Musical” (Catherine Zuber).

Inquirer  Lifestyle Theater recently interviewed Conrad via e-mail; he  chatted about his role as Lun Tha, his Vogue fashion editorial, and the best advice from his “Here Lies Love” costar Jose Llana (another Fil-Am actor who played Lun Tha, and who’s set to succeed Watanabe as the King starting July 14).

What was your first experience with “The King And I?” Did you ever see it before joining the cast?

I never saw it and was happy about that, because I didn’t have any iconic images to live up to in my mind.

How did you land the role of Lun Tha? You mentioned in an interview before that your go-to song/monologue is “Ain’t No Sunshine” from  “Measure for Measure.” Was that what you performed for your audition or did you do something else?

I just auditioned with music from “The King And I.” They sent me the music and I learned it.

Jose Llana also played Lun Tha. Did you ask him for advice or did he give you any advice about the role?

Haha! Yeah, he told me to get some good books because I’ll be spending so much time offstage in this role.

Where were you when you got the news that you landed the role?

What are the challenges in playing Lun Tha and how did you prepare for the role? What do you love most about playing him?

The things that are really challenging are also the things I love the most about Lun Tha—he is willing to put his life on the line and challenge the tradition of an entire country in order to be with the person he loves… I love being able to embody someone so courageous.

What is your favorite part in the production?

The people, everyone is so encouraging and supportive and talented, they make me a better actor.

Also, I love being able to watch Ashley Park every night (she plays my lover, Tuptim).

You’ve been onstage many times; do you still get nervous before a performance? How do you combat it? Do you have any sacred preshow rituals?

Yes! But I just channel the nervous energy into focus and commitment to the story we are telling… my sacred preshow ritual is, I go for a run in Central Park before every show, and I do a vocal warm up as well.

You just came off filming “How To Get Away With Murder” (HTGAWM). What are the main differences between performing for theater and television?

With theater, your performance has to reach the back row of the theater; and in TV, the camera comes to you and grabs your performance. It’s just a question of projection and magnification.

The New York Times has praised your chemistry with Ashley Park. How did you guys work at it?

We didn’t have to work on it! I love her to death! She has become a great friend.

Are you still planning to prank her?

Well, if I told you, it wouldn’t be a surprise, would it?

What other productions are on your wishlist?

Hamlet; I want to do “Romeo and Juliet” again; and also, any new work by new Asian writers.

Tell us more about your Vogue shoot!

It was the best! All of the people that work there are actually so nice, and so good at putting together looks and backgrounds that are not obvious, but surprisingly come together to make something uniquely beautiful.

You mentioned that the singing in “The King And I” is “more delicate.” How did you train yourself to become a more delicate performer?

I practiced different vocal exercises and a lot of breathing techniques.

You have an Instagram photo with Lea Salonga. How did you two meet?

We met during “Allegiance.” She is one of the most talented, generous performers I have ever come across. It is a crime that she hasn’t been back on Broadway in so long!

What’s next after “The King And I?”

Have you invited any of your HTGAWM castmates, i.e. Jack (Falahee) to watch? (We know, we know, Coliver is fictional.) Or have any of them watched you yet?

Yes! Jack came to the show and loved it!

You’ve played two brilliant fictional characters with a strong sense of right and wrong. Has this affected your real-life perspective significantly?

I’ve always been pretty well-grounded as a real person, but the stories I get to tell do teach me how to be a more compassionate person.