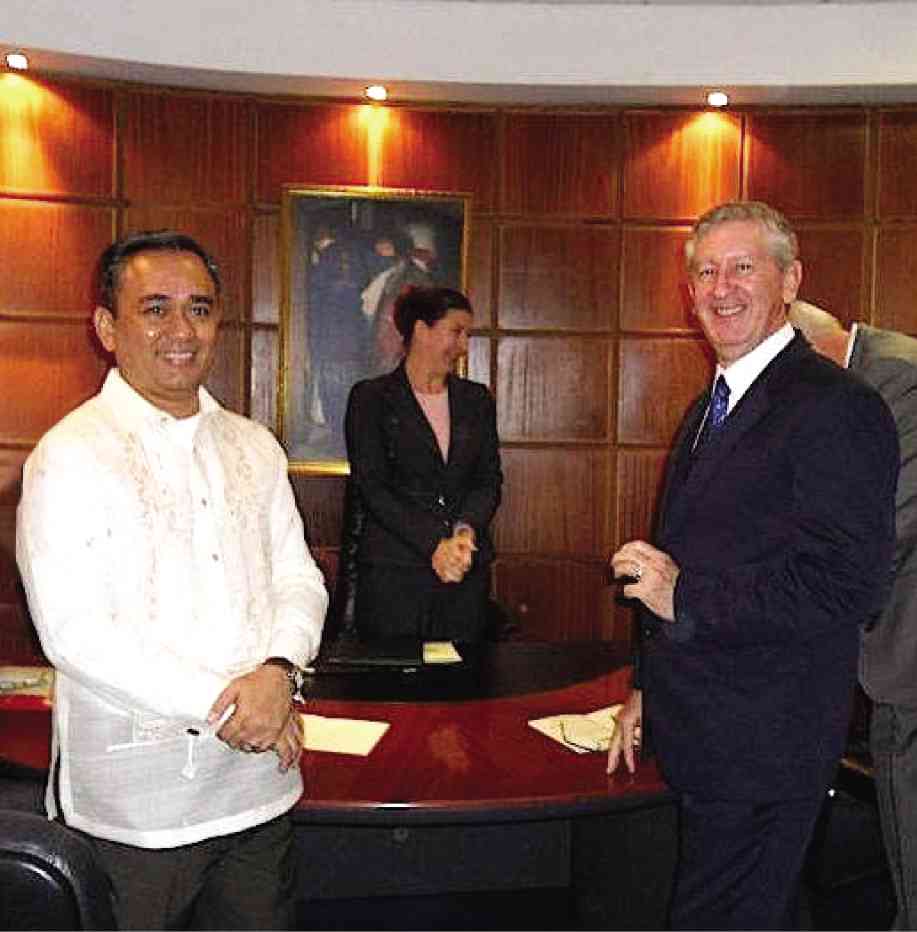 IGE Ramos (above, leftmost) and Kevin Connolly (rightmost) at their civil partnership ceremony in Dublin, 2011

Longtime couple to tie the knot in Ireland

In September, Kevin Connolly and Guillermo “Ige” Ramos Jr. plan to return to Dublin, Ireland, to get married.

After all, Ireland was the first country to approve same-sex marriage by popular vote on May 22.

But for the longtime partners, the forthcoming marriage is just a formality. “We just have to sign a piece of paper,” Connolly said.

The two were joined in civil partnership in Dublin in 2011 and have considered themselves married in all but name since they began living together in the Philippines in 1994. When they file into the civil registry office later this year, they will be among the first same-sex partners to be married under Irish law.

Connolly, 69, is Irish and a retired flight attendant. Ramos, 52, is Filipino and an award-winning book and graphic designer. They have an enduring relationship that has conquered culture, distance, age and, now, geopolitical history.

Connolly was born in Liverpool, England, but grew up a strict Catholic in Dublin.

He realized at an early age that he was gay. “It wasn’t an awakening. It was something that happened gradually. The awareness came when you realized you weren’t thinking about girls, but about boys,” he said, adding that he did not tell anyone about this because of the environment he grew up in. “It was mortal sin and that’s what you were taught.”

Back then, homosexuality was illegal in Ireland. Connolly explained there was no “outlet” for them except for one bar where people gathered in secret, even wearing disguises so no one would recognize them.

At 22, Connolly left Dublin to become a flight attendant for British Overseas Airways Corporation (Boac), the forerunner of British Airways.

He began living near London. “It was a tremendous cultural change for me,” he said, “coming from a conservative Catholic country to working with people who freely talked about sleeping with their boyfriends. It was completely alien to what I had known.”

He first visited the Philippines in 1979, returning three times a year. He fell in love with the place, citing the forgiving climate and the very Western culture where people spoke English.

“The culture is very similar to Ireland, Catholic, friendly, and people like to drink and sing,” he said.

In 2001 he decided to retire permanently in the Philippines.

Ramos had a very different experience growing up in Cavite. He knew from a young age that he, too, was gay. His clan proved to be not only tolerant but actually accepting of his sexuality.

He described his childhood as a happy one, so much so, his parents called him “Casper,” as in Casper the Friendly Ghost.

“There was no coming out,” Ramos recalled. “I was always gay.”

The only time he encountered a negative comment was when he was between high school and college. Ramos wanted to attend a workshop being held by the Philippine Educational Theater Association (Peta). He approached his older brother Francisco—17 years his senior and who gave Ramos his allowance—and asked permission. His brother turned angry and said, “Magiging bakla ka lang doon (You’ll just turn gay there).”

In his mind, Ramos replied, “But I am bakla.” He wondered, what was he doing wrong? Why did his brother react that way?

But Ramos acknowledged he had an easier time than Connolly. After graduating at San Sebastian College-Recoletos, Ramos started his career as a graphic designer and today runs Ige Ramos Design Studio.

Ramos and Connolly first met in 1991 at a popular gay bar, The Library, in Malate. Connolly thought the inebriated Ramos was arrogant after coming up to ask, “Do you have a light?”

Ramos quipped, “Why, is this a nonsmoking flight?”

But the following week, Ramos was back in The Library—sober this time. “He had a brain, after all,” said Connolly.

When Connolly left to work for British Airways (BA), he began writing Ramos, sending him postcards from the places he had been. This surprised Ramos. They began seeing each other whenever Connolly was in town.

“He’s very solid,” Ramos said of Connolly. “I need someone solid because I’m flighty. I’ve seen relationships come and go. Even when we don’t agree on things, he’s still there for me. He’s like a rock.”

“Ige came across as being very intelligent,” Connolly said of Ramos. “I came to realize we had the same kind of humor and what really brought us closer was that we had the same values. That’s the most important thing.”

In 1994, the two decided to move in together. Connolly was working one month for BA and would spend the next month in the Philippines. Ramos would pick him up and send him off at the airport, spending time in their shared home while Connolly was away.

“I became someone who liked routine because of him,” Ramos said.

Meanwhile, changes were afoot in Ireland. Homosexuality was decriminalized in 1993, and civil partnerships for same-sex couples became legal in 2010.

Why did they seek the formal civil partnership? “Commitment, and practicality, because I’m a very practical person,” Connolly said. “Meaning, automatically, when I die, Ige inherits.”

Ramos added: “And vice-versa, if I die, he inherits. He inherits all my books.”

Ireland legalized civil partnerships in December 2010; the law was enacted in January 2011 and people began applying. Connolly and Ramos applied in March.

Connolly planned the ceremony, and had to overcome his preconceived notions about what the ceremony would be like. Ramos, of course, designed the invitations.

The Irish bureaucracy was extremely efficient, and on Aug. 24, 2011, Connolly and Ramos exchanged vows and rings before 30 guests, mostly Connolly’s, at the Civil Registration Office.

Because it was a civil event, no readings from the Bible or biblical hymns were allowed. There were instead poems by Maya Angelou and Ogden Nash.

“No Matter What,” a song by the Irish group Boyzone, was played. Connolly wore a suit, and Ramos, a barong Tagalog; the Philippine Ambassador to Ireland, Ariel Abadilla, attended.

“It was a wonderful, wonderful occasion,” Connolly said.

Asked what changed for them after the ceremony, the two replied in unison: “Nothing.”

Ramos said: “I just wished that our marriage was recognized here. This is a very strange society. On one hand, we’re very conservative and on the other, it’s very lenient. So where do we go? For instance, I run a business, I have the design studio and I pay taxes. I cannot declare Kevin as my dependent. I don’t get the benefit. Essentially, here, I’m still single.”

Leading up to the May 22 vote in Ireland, Connolly was worried. “I was frightened to think what might happen,” he said. “I kept blanking it out.”

He was worried enough to send an e-mail: “This is going out to my family and those whom we consider to be our closest friends in Ireland… Of course, how you vote is something you will do, having weighed all the arguments, and thereby use your own judgment. However, whichever way the vote goes, we hope you will understand that it is nevertheless essential for Ige and me to know if the people we hold dear also believe that our relationship should be protected under the constitution. So, like the referendum itself, it’s a very simple question requiring a very simple answer.”

On the day itself, Ireland approved same-sex marriage by a landslide, with all but one constituency saying yes to extending civil marriage rights to same-sex couples. In the end, a 60.52-percent turnout resulted in a 62-percent “yes” vote.

As Irish people—gay and straight alike—gathered in front of Dublin Castle to celebrate the historic vote, Connolly could hardly contain himself. Ramos was out, so Connolly just texted him: “It’s going crazy.”

Ramos knew immediately what he meant.

Landing on the moon

He said: “This is my own view. I can compare it with man’s landing on the moon. We are talking about a feat of humanity. It’s so great that actually I’m no longer a second-class citizen, at least in Ireland.”

Connolly explained: “The only difference for us is that it’s now enshrined in the constitution and it would take another referendum to change that. I’ve never been so proud to be Irish as I felt that day.”

The law will still have to pass through the Houses of Oireachtas (the Irish parliament) but Connolly said this would be a mere formality and he fully expected it to be enacted in July.

And then they can legally be called “married.”

The vote was important but it does not change everything, Connolly noted. “It doesn’t do away with homophobia. That hasn’t changed.”

These days the two prepare for the long haul. They travel three times a year.

“I cook,” said Ramos, a recipient of the Doreen Gamboa Fernandez Food Writing Award. “We eat.”

The two devote a lot of time as volunteers for charity. They exchange ideas freely and vigorously. “That’s the beauty,” Connolly said. “Although we go through a bad patch like any other couple for a couple of days, but even when we have a blow-up at breakfast, it won’t last for more than two hours. I sulk. I go quiet. And then it just wears off.”

Both know the value of what they have. It’s something they built back in 1994 when they decided to devote their lives to each other.

“My other siblings’ marriages fell apart at a very early age. I promised myself I won’t go through that kind of relationship,” Ramos said. “We’ll get married and then suddenly it’ll be our 25th anniversary.”