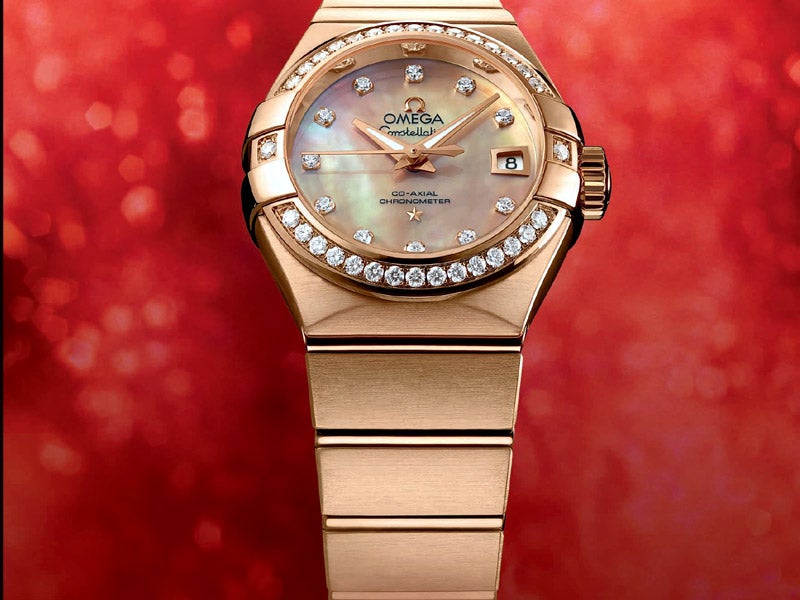 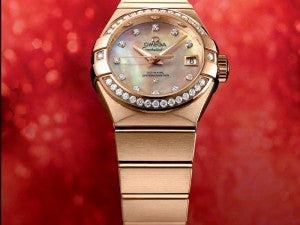 In 2009, OMEGA launched a redesign of its entire Constellation line. The watches in the popular family are decidedly fashionable and are even more glamorous than their predecessors. Now OMEGA is introducing new Constellation ladies’ models with the brand’s in-house Co-Axial calibre 8520/8521, the revolutionary mechanical movement widely considered to be among the world’s finest.

The featured model has a case crafted from 18 Ct red gold and a matching bracelet with brushed links and polished bars. Its bezel is paved with 32 full-cut diamonds with a total weight of 0.50 carat. The dial is crafted from a unique gold mother of pearl. Eleven single-cut diamonds with a combined weight of 0.12 carat mark the hours and there is a date window at 3 o’clock.

The Co-Axial movement at the heart of this Constellation is equipped with OMEGA’s Si 14 silicon balance spring. The dimensions of the movement have allowed OMEGA to introduce its proprietary Co-Axial technology in a 27 mm wristwatch for the first time. The combination of the Co-Axial calibre 8521 and the silicon balance spring offers so much stability that OMEGA delivers this stunning timepiece with a four-year warranty.

The OMEGA Constellation Co-Axial watch was designed for the woman who cares as much about the mechanical movement inside the case as she does for its breathtaking beauty.

Omega Boutiques are at Greenbelt 5, 6750 Retail Arcade, and Trinoma.