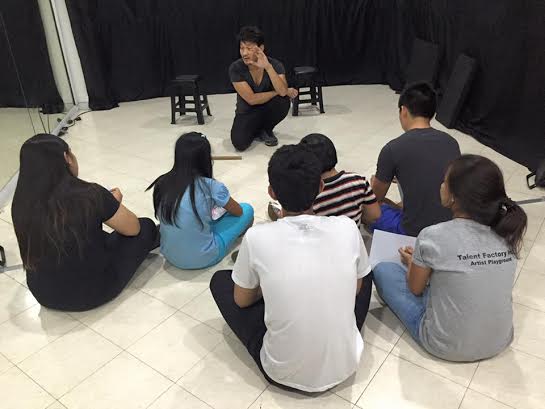 There is a new kid on the arts block, small-scale yet ambitious. It will focus on theater arts but will not limit itself to this genre, as it seeks to embrace as well music, visual arts, photography, scriptwriting, dance and short films.

This was announced at a press conference at 1701 The Little Room Upstairs, Lansdale Tower, in Mother Ignacia Avenue, Quezon City. The condominium unit will be the headquarters of the company.

Presented during the press launch was its season opener, “The Riddle of the Sphinx,” a 30-minute play written by Eugenio Deriada, translated into Tagalog by Jim Bergado and directed by Paule.

The play deals with the  stages of man (and woman), starring Ace Urieta and Shiela Espina—from birth to youth, flirtation, relationships, marriage and children, to old age and (I think) death. And finally to youth again, showing that life is a cycle (or a riddle, going by the title).

This will be followed by “Tag-ani,” part of a trilogy written by Philstage Natatanging Gawad Buhay! awardee Amelia Lapeña-Bonifacio (Aug. 22-23, 29-30); “Ginugunita Kita,” a reprise of the concert featuring the poetry of Maningning Miclat and the music of Lucas (CCP, Sept. 3, 7 p.m.); “We Hear But Do We Actually Listen?” a one-woman show in September featuring Angelina Kanapi; and “Jaded-Miniature Series,” a solo exhibit by Lubay.

Said Lucas: “This is a room for exploration, for new artists. We are developing two talents with great potential, but they are not yet ready … this is the venue for them.”

He added: “We are training composers and those who plan to go into short films … also the new breed of artists for theater, visuals, music-writing. It’s collaborative. They can compose for plays or go into short filmmaking, or into musical theater. There is room for composers to explore.”

Camañag said that Artist Playground’s vision is to be “a training center. It answers the question after the workshop: What’s next? It is a discipline, a system to explore talent. It is open to all artists. Friends in the industry are willing to teach writing.”

The actor-director also teaches at the Pamantasan ng Lungsod ng Valenzuela (PLV), and many of the talents he is training are from that school.

“This is a venue we can give to them,” he said. “With this setup we can choose material. We want to include the young ones so they will understand theater.”

He added: “It is not just for emerging talents but also for those in midcareer. We can take our time to perfect a production, unlike in mainstream theater. It is a laboratory, a training ground. It is an art company.”

Art Playground, he said, is like “a baby, a crib with a small space which can grow bigger. It is a little room but it offers a big space for exploration.”