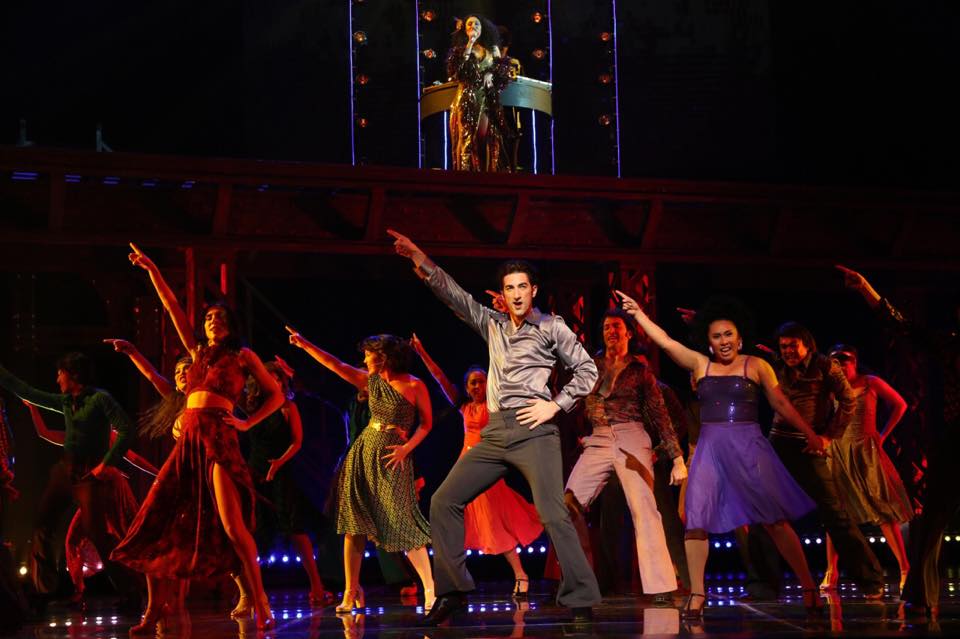 “Saturday Night Fever,” Atlantis Theatrical Entertainment Group’s stage version of the iconic 1977 movie, is a huge improvement over the original.

Unlike other movie-to-musical theater versions of recent years, it is not a mere replay of well-loved material, but actually brings out aspects that the film had missed, while successfully translating the parts that worked on the big screen to the stage.

I happen to be a huge fan of the film, which I’ve seen dozens of times. Then, as now, it is easy to forget the heart of the original material, with the compelling Bee Gees-led soundtrack and a riveting John Travolta grabbing your attention from the moment his character, Tony Manero, struts down Brooklyn.

People who trooped to the movie house and eventually bought the DVD just couldn’t wait to get from one dance number to the next, oblivious to the lead character’s struggle with his insensitive family and his mismatched romance with a girl, Stephanie (played by Karen Lynn Gorney in the movie), who fancied herself a class above him.

It’s that heart which is brought to stirring life by director Bobby Garcia and his creative team, especially musical director Ceejay Javier who puts more zing to the rearranged familiar songs and few more additions, both to recreate the era and make it relevant to a new generation.

This “Saturday Night Fever” is more than just a series of famous disco tracks strung together; it is the familiar tale of a lost generation of young people who fail to relate to their families, friends and community, and even their own dreams.

As a reimagining of the Bee Gees’ non-“Fever” hit number puts it, life becomes a “Tragedy” for some, like the suicidal Bobby C (Bibo Reyes).

Thus, at the end of the musical, when Tony and Stephanie come out from the prison of their lives to reconnect as friends and kindred spirits, it is a poignant victory.

These two characters start out as two charming, lovely and yet pretentious and selfish brats who eventually and amazingly come to terms with their fears and vulnerabilities and realize their lost humanity.

Their rendition of “How Deep Is Your Love” becomes an expression of their new bond and a hope for a brighter future. The movie’s ending did not have that lift. Travolta’s Manero simply leaves Brooklyn in anger and desperation, but Gorney’s Stephanie remains wary and even skeptical.

Audiences at that time found the movie’s ending a downer, in stark contrast to the jaunty “Staying Alive” strut that electrified its beginning.

But then again, the movie’s Tony and Stephanie did not have the same chemistry as their counterparts in the Manila stage version (Brandon Rubendall and Jenna Rubaii).

Travolta overpowered Gorney and made the movie a one-man show; Gorney’s Stephanie was a mother figure at best and a wet nurse at worst.

The onstage chemistry sizzles from the moment they meet, and Rubaii is a cold attractive foil to Rubendall’s bluster. She more than holds her own and can walk all over him and his friends, the swaggering Faces with their misogynistic machismo value systems.

Still, as life throws them one curve ball after another, this couple realize and recognize that they are far more similar than they would care to admit.

And while mimicry would have been an easy way out, Rubendall does not devolve into a Travolta clone—a tough feat to accomplish.
To Travolta’s despair—as he said in an interview decades ago—his Manero was regarded by a dazzled public as sex incarnate in a dancing white suit.

While Rubendall does ooze his fair share of sexuality, his Manero is a complex character: rebel of an unnamed cause, outcast son, displaced brother, rejected lover, disco champion, god of virility, and little boy all rolled into one.

A splendid supporting cast of Filipino and American actors brings this drama to life; Garcia has assembled a top-notch ensemble who don’t just act their roles, but sing and dance them with abandon.

The live band’s playing under Javier’s ministrations makes the movie’s music emerge from the background into the forefront, where they become a mirror of the characters’ souls. While it is easy to get lost in the movie’s music and ignore the words, the rearrangements make those lyrics a part of the unfolding dramatic tapestry.

This stage version makes you hear the classic movie soundtrack in a very different light; the lyrics of those disco tunes do begin to make real sense.

The Faces (Reyes, Nel Gomez, Nick Varricchio) belt out “Staying Alive” and “Jive Talking” as an ode to survival. Mikkie Bradshaw’s earnest “If I Can’t Have You” elevates Annette from a doormat to a desperate woman willing to fight for her unrequited love.

Rubendall and Rubaii’s “More Than a Woman” actually shows why Stephanie captures Tony’s heart and elevates her from being another skirt he could have into a lady he could respect. And even the obscure lyrics of “You Should Be Dancing” transform into Tony’s personal “rage-against-the-dying-of-the-light” anthem, sung and danced with both exaltation and defiance against despair.

Garcia’s direction, Javier’s musical interpretation and the performances make the relationships of these characters deeper than those in the film.

Tony’s parents, played by Jamie Wilson and Carla Guevara-Laforteza, are the shadows that hang over Manero’s life, a warning of what he and Stephanie could become if they don’t break out of their shell.

Rafa Siguion-Reyna as Tony’s brother Frank Jr. is his temporary bedrock; when they part, there is a pain that was not felt in the cinematic version. The Faces may drink, dance, party, and brawl the night away, but as the dying Bobby says despairingly in the end, they were never really there for each other.

Thus, Tony and Stephanie’s coming together at the end is more realistic because it is an authentic, fresh start at getting to know each other again, and not a forced storybook romance. It is also appropriately quiet in its musicality, a moment of joy and peace following a seemingly unending  roller-coaster ride.

Back then, nobody cared; all the audience looked for was Travolta’s dazzling turns.

In the stage version, the audience will follow the journey of the characters in discovering the answer.