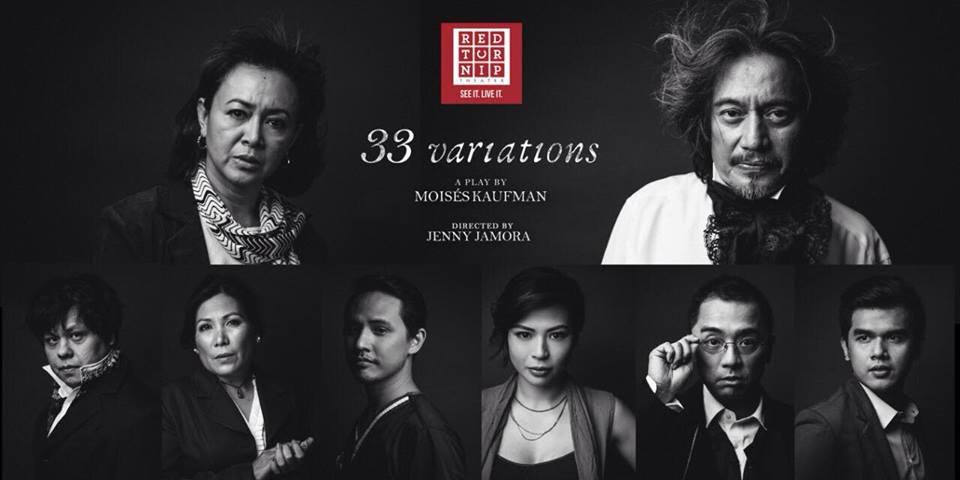 “33 Variations,” directed by Jenny Jamora, runs until Aug. 23 at Whitespace Makati. “You see the character through his music,” says Teroy de Guzman, who plays Beethoven. “You see and feel the emotions that run through him.” PHOTO FROM RED TURNIP THEATER

Music, mediocrity and motherhood in ‘33 Variations’

A passion for or a knowledge of classical music is not a prerequisite to enjoying “33 Variations,” the Red Turnip Theater production of the critically acclaimed play written by Moisés Kaufman  now running at Whitespace, Makati City.

That’s the first assurance the creative team wants to give  theater buffs and newbies alike who might think twice about watching a stage performance on the life of genius composer Ludwig van Beethoven.

Then again, the music of the master plays not just an integral role in the material; it becomes virtually another “major character, with its own spirit and entity in the lives of the other characters,” says director Jenny Jamora.

This is no “Amadeus,” Peter Shaffer’s famous play which gave the audience a glimpse into the mind and soul of Wolfgang Amadeus Mozart by way of the bitter appraisal of his putative rival at that time, Antonio Salieri.

In “33 Variations,” which was nominated for five Tony awards, including Best Play, in 2009, Kaufman’s script allows Beethoven’s 18th-century Austria to cross over into 21st-century America through the life of another, albeit fictional, prodigious talent who is wrestling with her own demons while studying a peculiar chapter in Beethoven’s life.

“‘33 Variations’ has two timelines,” says Jamora. “Katharine (played by Shamaine Centenera-Buencamino) is a brilliant musicologist who suddenly confronts her mortality as she finds herself physically wasting away. She is researching why Beethoven created variations out of a simple waltz. There was a time in his life when Beethoven would, over certain periods of time, sporadically create something from this waltz which appears to be very ordinary. He would start a variation, stop it, then shift to finish the other masterpieces he would be known for—and then go back to the variations.”

Beethoven eventually made 33 variations of the modest piece. Why on earth would a genius spend time, energy and his vast talent on mediocre work?
His obsession with it is the mystery that underlies his and Katharine’s emotional and intellectual journeys through the play.

“You see the character through his music,” says veteran actor Teroy de Guzman, who essays Beethoven. “You see and feel the emotions that run through him, from self-pity to anger to triumph.”

Buencamino sees her part as “an A-1 personality, an achiever who is respected, and she can’t understand why someone like Beethoven can devote so much time to mediocre work.”

Katharine’s obsession with the puzzle, however, has deeper roots. If she can discover the reason behind Beethoven’s fixation, maybe she can “…find something good in her daughter who is mediocre.”

Katharine and her daughter Clara (Ina Fabregas in her stage debut) have a relationship where “they love each other but they can’t stand each other,” adds Buencamino.

“Katharine measures Clara according to her standards—and the girl is neither here nor there with her activities.”

Clara’s perpetual job hunt and her changing affairs with men irk the more professionally stable, more intellectually rigid Katharine. Fabregas says Clara might not consider herself mediocre, but it does not make her own quest less agonizing.

“Clara has this fire in her which she herself does not understand. Yet she also knows she has a lot of things to settle with her mother. And at the end she wants Katharine’s love and acceptance. Her question to her mother is, ‘Why can’t you see me beyond mediocre?’”

Ultimately, “33 Variations” is a search for meaning and healing, with Beethoven’s music serving as both a salve and a lifeline.

“Everything happens fast in life, especially when you are trying to achieve excellence,” says Buencamino. “Everything becomes a blur and you forget to appreciate the ordinariness of just being there. But Beethoven’s favorite waltz has simplicity—and it can be enjoyed for what it is.”