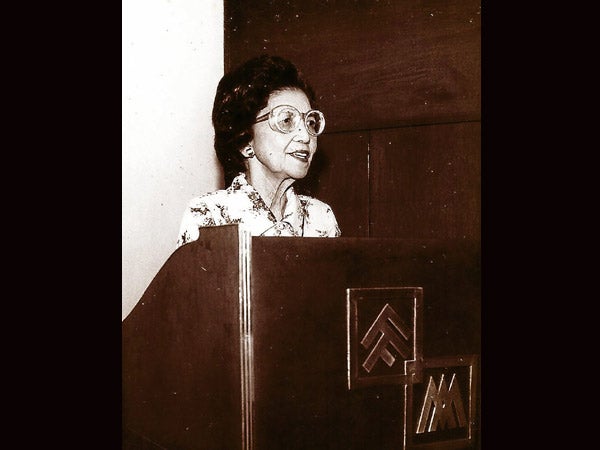 Highly regarded as she was in international medical circles, Dr. Fe del Mundo was our beloved Tita Fe, who cared for us as patients and as nieces and nephews. Her passing away on Aug. 6 marked the end of a glorious medical era that spanned 10 decades of exceptional service to Filipino children.

While Dr. Del Mundo stood on a pedestal as a preeminent physician, she also was a gentle and affectionate sister, cousin and aunt whose care and affection will always be remembered.

She would beam at us on sight and pat our heads, but stayed away from wet kisses from the littler ones. She was petite, barely 5 feet tall with a fragile frame that belied a strong will and an agile mind.  She was a fastidious dresser, well-turned out in coordinated tailored outfits, from dainty vintage jewelry to two-toned high heels and hair that was impeccably coifed. She was an engaging speaker, regaling us with her anecdotes of her student days and her travels.

She started her day with Mass at Sto. Domingo Church, and followed it with tireless hospital rounds and clinic hours which she continued well into her 90s. She slept just for a few hours and ate little, often simply munching on carrot sticks, and lived to 99, three months short of turning 100 on Nov. 27.

We saw her often at Children’s Medical Center Philippines, the hospital she put up in the 1950s in Banawe, Quezon City, and which has been rightfully renamed Dr. Fe del Mundo Medical Center. The following are some vignettes on the family life of the great pediatrician.

Milagros Belmonte-Reyes, daughter of Carmen del Mundo-Belmonte, eldest sister of Dr. Fe, recalls how Fe and Carmen’s mother, Paz, died in 1925, and her sister Mercedes Hilario took over caring for them and siblings Salvador and Corazon in the Hilarios’ house in Malate.

In that huge house, joyous family gatherings were held. “I remember the big garden, the heavy front door, the wide staircase, two salas each with a piano,” says Milagros. “A room on the ground floor was meticulously prepared for Titas Fe and Corazon where they stayed upon their arrival from the United States shortly before the outbreak of World War II. This drew the family much closer.

“Annexed to the house with its own entrance was the clinic and laboratory of Papa Hilario, who was a renowned dermatologist. In this clinic, Tita Fe assisted Dr. Hilario and was honed in the field of Bacteriology. We know that years afterward, she completed her Master’s degree in Bacteriology at Boston University and Massachusetts Institute of Technology.”

“When I was a toddler and old enough to walk, I went to Tita Fe’s house in Panay Avenue, Quezon City, to house-sit,” recalls Ditas A. Hilario, youngest daughter of Pepito Hilario, cousin of Tita Fe. “She lived by herself in that spacious and beautiful bungalow perched high on a hilly street.

“Due to her busy schedule, the doctor’s house was often empty and we went to check on it almost daily. There was always a bottle or two of ice-cold Coca-Cola and Royal Tru-Orange in her refrigerator waiting for us. There wasn’t much cooked food but we snacked on chicken sandwich and pastries. In the hospital, we saw Tita Fe getting by mealtimes munching on sticks of carrots. Some days, we were lucky to chance upon Tita Fe at home and she would sit with us and chat.

“When I went for my regular medical check-ups at the hospital, I dreaded the injections and Tita Fe would give me a choice—a needle on my arm or on my butt. I would always pick the latter and it worked out well. The injection didn’t hurt and I didn’t see it coming.”

“I saw my father Salvador die beside me on Leveriza Street,” recalls Ambassador Luz G. del Mundo, second daughter of Salvador del Mundo, brother of Fe. “He was trying to bring us, his wife and children, to the Malate Catholic School Clinic.

“Salvador Jr., my brother, sisters Josie and Elisa who was only 4, and I were being pushed by crowds toward the Paco area, for fear that Japanese soldiers who had been bayoneting people would find us. I saw my aunt, Dr. Fe del Mundo, with some Fil-American soldiers coming toward us. She took us with them to North General Hospital where she was the director.

“We were then brought to the home of my aunt Carmen M. Belmonte and her husband, Tito Tony, on Washington Street. We lived in a room given to us by Tita Mameng; she was a song of the world at a time when we most needed help.”

“The house on Washington, No. 1343, was a wooden structure of two stories,” recalls Dede Belmonte- Clemente, younger daughter of Carmen, eldest sister of Fe. “There were five bedrooms, a spacious grilled balcony facing the street on the second floor, the upper part of which was embellished with stained glass. The postman would often deliver to this house letters and postcards from ‘T. Fe’

“The charming house became an involved witness to countless happenings on both the Belmonte and the Del Mundo-Hilario sides of the family.

“Climactic for the house but more so for its residents was the Liberation of Manila in February 1945. Our side of the Pasig River saw the light ahead of the southern sector, where the Japanese forces were desperately holding up their front under the shelling of the American troops. Houses were burned and their occupants had to run for their lives and scurry for shelter.

“In the face of all these happenings, the family which Providence had gathered together, especially the children, managed to enjoy buoyant moments.

“Once, on a break from his schooling in the US, Virgilio lodged for about two weeks in the house. My parents shared their room with him; and he slept on a folding bed beside theirs.

“Virgilio came with his beauteous brand-new wife, the first Miss Universe Finnish Armi Kuusela, to meet relatives he considered family. Mommy brought out pictures, which Mama Dedes had passed on to her to be put in order. Mom Carmen meticulously glued the photographs on the black pages of an album, which she covered with blue cellophane over tin foil. This album was presented by Mommy to them as a wedding present. Those were the days!”

I am the eldest daughter of Pepito Hilario, first cousin of Dr. Fe, and I remember her as a storyteller. In every program, she was the most interesting speaker as she peppered her talk with personal anecdotes which make her experiences come to life. She was witty, funny, humble and even self-deprecating as she made references to her height and gender, which all the more endeared her to her audience.

She related how she got into Harvard with the help of my grandfather, Dr. José Hilario. Lolo Pepe believed in Tita Fe’s capabilities and referred her to be a President Quezon scholar in Harvard Medical School. It took months in those days to sail from Manila to Boston, and the tiny doctor journeyed to her destiny. She recounted with amusement that on reaching the prestigious academy, Harvard was truly surprised that not only was she frail-looking and barely reached five feet, but that she was a woman. Harvard accepted only male students then and was in a total dilemma, but due to her impressive credentials, the sponsorship of the President of the Commonwealth, and the fact that she had traveled a great distance, Harvard took her in. She was the first female and first Asian to enter the hallowed halls of Harvard.

Due to the circumstances surrounding her acceptance into Harvard, she studied harder than anyone else.

Harvard was skeptical about her future as a doctor because of her petite frame, but Tita Fe was undeterred, and that was when she considered that she would be a pediatrician “so that my patients would always be smaller than me.”

Tita Fe humorously pointed out that when she was hospitalized in Hawaii after she and sister Corazon figured in a car accident, she received a transfusion of strong Hawaiian blood and that had been the reason for her strong constitution and longevity.

After I graduated from college, Tita Fe appointed me to be a board of trustee of the hospital, a position I hold to this day. I believe I am the longest-serving trustee and I am grateful to Tita Fe for the trust and the privilege of serving her. I pray that the hospital that Tita Fe established will be able to continue the work she started and live on to both immortalize the great physician who was its founder and serve the Filipino children who are first in her heart.