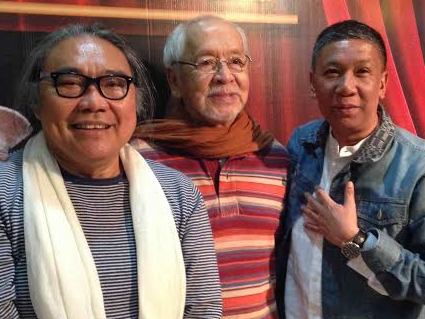 Alex Cortez steps down as Dulaang UP artistic director

The flagship theater company of the University of the Philippines-Diliman is celebrating its 40th year with a new chair, Ma. Amihan Bonifacio-Ramolete, dean of the College of Arts and Letters (replacing Flora Elena S. Mirano), and with a new artistic director, Dexter Santos.

The latter replaces Alexander Cortez, who has been artistic director of Dulaang UP (DUP) for the past eight years.

Now retired, Cortez, a cofounder of the theater company organized by Tony Mabesa during the mid-1970s, remains a member of the DUP Advisory Council.

“There were only a few of us directly involved (during the early days of DUP),” recalls Cortez. “We were the stage managers, production managers, actors, set designers, directors. Tony (Mabesa) would call me Mr. Dulaang UP. We were backed up by teachers and mass communication students, a lot of them (even now). They would do production work, sell tickets. They loved the work, the productions, the discussions. They were passionate about theater, about performing. They would do it even on empty stomachs.”

As artistic director, Cortez practiced autonomy. “We were trained to be on our own as directors. I never really interfered with any of the directors. We’re artists, so unless it’s something that’s very, very controversial, which of course never happened, the director is left on his or her own.”

There would only be two meetings during his stint: to plan the season and a post­ mortem at the end.

At the start, “we laid down what we thought was ideal for the season,” Cortez says. “It could be historical plays or, a year of replays, or maybe cutting-edge plays, very contemporary, or maybe classics. A year of Shakespeare, a year of Ibsen, like that. It’s quite open; there are no restrictions on the subjects we want—though we also have to take into account social-economic conditions, changes in schedule, production expenses, ticket sales, etc.”

The favorite plays he has directed include “Atang,” about Kundiman Queen Atang de la Rama, which starred Shamaine Centenera Buencamino and Frances Makil Ignacio, and was written by Floy Quintos; “St. Louis Loves Dem Filipinos, The Musical,” also written by Quintos, with music by Antonio Africa and starring Miguel Castro as the Filipino tribesman put on display at the St. Louis fair during the early 1900s.

There’s also Shakespeare’s “Richard III” and the back-to- back productions of “Measure for Measure” in English and Filipino—because “there are those who want the show in English, while others want it in Filipino. So we do both as a challenge to ourselves and our Theater Arts students and also to appeal to a wider market.”

His next directorial effort for DUP will again be in English and Filipino—Shimizu Kunio’s “The Dressing Room: That which flows away ultimately becomes Nostalgia”—scheduled for April 2016.

“I saw this in Beijing, and it’s a very funny play. The play in English will have a female cast, but the Filipino translation will feature a male cast in the tradition of the Onnagata—male actors performing female roles, not gay.”

Like his mentor Mabesa, who in October this year is directing a back-to-back English and Filipino production of “King Lear” (Joel Lamangan stars in the Filipino version while Leo Rialp and Pen Medina alternate in the English version), Cortez may have retired, but he’s not about to hang up his theatrical boots any time soon.