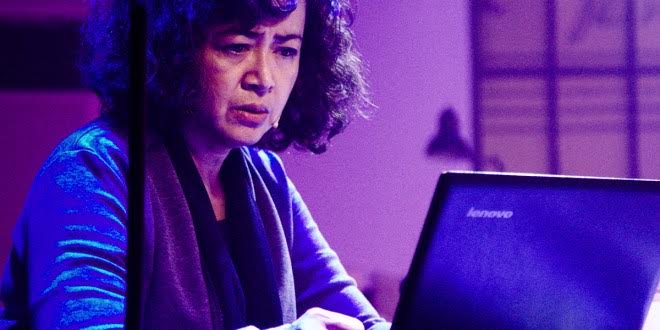 As her health slowly fails (she is stricken with Lou Gehrig’s disease), American musicologist Katherine Brandt insists on going to Bonn, Germany, to visit the Beethoven archive and peruse the great composer’s drafts of his “Diabelli Variations.”

The project consumes her: Why did the man, who was at the time working on his late masterpieces (such as the “Ninth Symphony” and the “Missa Solemnis”), and who was a few years from his death, get caught up in writing such a large work, by reputation one of the greatest compositions for solo piano, based on a trifle?

Anton Diabelli, publisher by trade and musician by avocation, writes a little waltz and invites the great composers of the day to write a variation, the results of which he will publish in a book.

At first Beethoven, by way of his secretary Anton Schindler, pooh-poohs the waltz as a “cobbler’s patch,”  but then he mysteriously changes his mind.

Brandt latches onto the mystery and devotes her remaining days to solving it.

The story branches out into three narrative threads, one with Brandt in the archive in Bonn; another with her daughter Clara, with whom she has a difficult, distant relationship, and Mike, the nurse Clara falls in love with; and the third, set two centuries earlier, with Beethoven, his secretary Anton Schindler (a comically starchy Rem Zamora), and Diabelli (a deliciously foppish Paolo O’Hara).

Scenes flip between one era and the other, with the actors crisscrossing the same space using the same props. It’s a race against time for both Brandt and Beethoven, both consumed by an obsession that puzzles those near them.

Clara can’t understand why her mother has to make the journey just as her health takes a turn for the worse, and Schindler can’t fathom his master’s obsession with, as he exasperatedly snaps at the publisher, “your insignificant waltz.”

It’s a clever and ambitious idea, and Moises Kaufman (author of “The Laramie Project” and a well-regarded director himself) weaves a story with fanciful turns, braiding the different threads into a satisfying and affecting whole.

His text is given vivid life by Jenny Jamora’s astute direction (her first-time effort), the strong ensemble cast, and luscious, live piano music.

At the archive, the custodian Ladenburger (Roselyn Perez) informs her that Beethoven’s drafts offer a glimpse of the composer’s “unadulterated first impulse.”

Then the lights illuminate the cavernous Whitespace, with its unprepossessing proportions of a warehouse, to the fragments of Beethoven’s sketches, on backlit yellowing paper blown up like cathedral windows, hung from the walls.

Brandt and Ladenburger gaze up at them when talking about the music, as if on hallowed ground. The impressive scenic design (a welcome departure from the simple urban realism of last season’s “Rabbit Hole” and “Time Stands Still”) is courtesy of Ed Lacson Jr.

The stage is both everyday world-workspace (desks with Beethoven’s papers are always on the stage), hospital room, dance club, library—and a sacred space. (The theater’s poor acoustics, for its part, remains an ongoing challenge, the cavernous proportions muddying dialogue, a problem that bedeviled previous shows.)

If there’s a flaw in the proceedings, it can be found in Kaufman’s script. The writing is inventive, often moving, but sometimes too neat. Mike (an earnest Franco Chan), the nurse whom Clara falls in love with, counsels her that closure among people in relationship with the dying is rarely attained. But closure is what the writer insists on arriving at.

For all its playfulness, the story pits two simple ideas against each other: the purity of artistic obsession (embodied by Brandt and Beethoven) and the pragmatism of everyday life (Clara). When her mother tells her she can’t excel at anything if she keeps changing careers, Clara answers, “I excel at changing careers.”

Clara (a charming Ina Fabregas) is clearly a woman of some talent (her costume design is praised in a Village Voice notice), but her wandering is not explored, and while Katherine lives the more interesting and admirable life, Kaufman’s story insists that only the mother has anything to learn.

In an unnecessary scene, Brandt wakes up in the middle of an MRI and finds herself in conversation with the composer, dead two centuries. She chuckles, realizing she is hallucinating. Then the old man gives her advice on how to treat her daughter. Kaufman isn’t content to have Beethoven the avatar of artistic genius; he must also make him a paternal old sage.

Such lows are few, though, and in the second act especially, the play moves from high note to high note. In one of them, Beethoven—played by Teroy Guzman, who after recent turns as King Lear and Macbeth easily makes the iconic, irascible composer come alive, channeling Lear minus the bitterness and cosmic rage—agonizes over the penultimate variation.

After laboring nearly four years over the piece, he doesn’t know how to end it. He decides on a fugue, a form that he knows he has never mastered, and writhes about the stage as idea after idea comes to him, and Ejay Yatco, the pianist who anchors the production with his fluency at the keyboard (a baby grand is always on stage) and who acts as the composer’s double (complete with cravat, waistcoat and tousled hair), carries him along the movement’s wild and sudden turns.

It’s a small explosion in a play with quite a few of them.

The best scene: as Katherine (the quietly stellar Shamaine Centenera-Buencamino) is wheeled into a big whirring machine for a scan, the lights go out, and the cast segues into the “Kyrie” from the Missa Solemnis.

After all the instrumental music, the sudden interval of song is uplifting, rousing, reminding us that though Beethoven’s body ultimately betrays him, his voice still arrives, transportive and heavenly, from beyond.

It also recalls another work Beethoven was working on at the time and for which he is wildly famous: the Ninth Symphony. Its fourth and last movement explodes in a song, a stunning moment in the history of music for a musical form that was always merely orchestral.

“You can’t express new ideas in old forms,” he tells Schindler at one point, explaining the inexplicable things he has done with Diabelli’s waltz. The sudden burst of choral music feels like the touch of genius, of wild inspiration, and very Beethoven-like.

At the end Kaufman’s script arrives at a fine musical conclusion: Beethoven’s genius is not one of invention (unlike Amadeus “touched by God” Mozart) but of insight. His music transports us not to some otherworldly realm but allows us to see everyday moments with new eyes.

The play celebrates life folded tightly into quotidian moments only a genius like Beethoven can unpleat.

So he does not bring Katherine to a rarefied stratosphere but returns her to her daughter. “It’s your own daughter you can’t see,” Ladenburger tells her, and she finally sees.

A mere three years old, Red Turnip Theater has already carved out a space for itself in Metro Manila’s theater landscape, offering smart, contemporary American and British plays that have quickly found a steady audience.

For its third year, the company may be raising the stakes, staging more challenging material. “33 Variations” features a larger cast and more narrative, musical and conceptual complexity than its previous offerings. That it tops them despite its loftier ambitions shows a newfound courage, as well as the skill to back it up.

In a landscape marked too often by the tepid and the tame, Red Turnip is most welcome.