15 things you should know about Kevin Kwan | Lifestyle.INQ ❮ ❯ 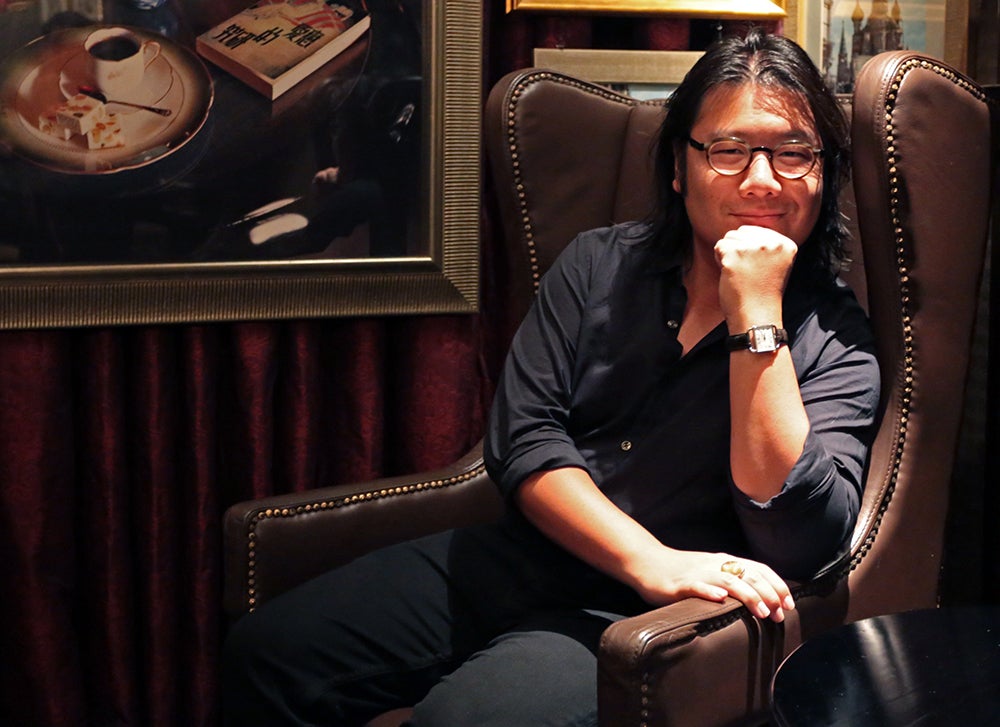 15 things you should know about Kevin Kwan

Kevin Kwan is in Manila and, like anyone who has read his bestselling books “Crazy Rich Asians” and “China Rich Girlfriend,” we had a ton of questions for him.

The New York-based author, who was born and raised in Singapore and who moved to the US when he was 11, has said that his novels, which explore the world of an outrageously wealthy clan, were partly inspired by his own upbringing. Naturally, this was question number one: how did his family react to the books?

“A few of them have read my books. Just a few. A lot have not. I think, just because of the way my family is, there’s really no reaction, you know what I mean? They’re just silent,” he said, laughing.

But Kevin’s fans haven’t been silent, spreading the gospel of his funny and fascinating books online and offline. The “Crazy Rich Asians” movie is in the works  and more and more people are picking up the equally entertaining follow-up to his debut novel.

(Read: Kevin Kwan: “There’s nothing in my book that’s fake”)

Kevin’s fans in Manila (and there are a lot of them) will get the chance to meet him at book signing events at Fully Booked in Bonifacio High Street and Alabang this weekend.

But before that, we sat with Kevin at The Peninsula Manila’s Salon de Ning. Here are 15 things we discovered about him:

This isn’t his first time in the Philippines. “I was here in 1997 on vacation visiting a friend. I was spending the summer in Asia and my friend from New York was gonna be here. She has family in the Philippines so I came to visit her and we had an awesome awesome time.”

While you were waiting for him to arrive, he was actually having fun in Palawan. “I was in Palawan for five days and asbolutely loved it. I did a lot of snorkeling, I did a lot of kayaking. I love a lot of these outdoor water activities so you know, I did a lot of hikes and did a lot of island-hopping just to really see the amazing parts of Palawan.”

This visit has converted him into a garlic rice fan. “It’s the best. Like, why that’s not done in other places, I don’t understand.” We get it, Kevin. We love sinangag too.

If you ever reached out to him on Facebook, Instagram or Twitter, you’re the reason he decided to come here. “There was so much positivity and support and love coming from the Philippines that I just felt that I had to come and check it out to see if it was real or not or if it’s the same five people changing their names,” he said, laughing.

Alistair Cheng is still the ‘Crazy Rich Asians’ character that he relates to the most. “It’s interesting. I mentioned that in passing in one interview and it’s funny how everyone’s sort of latched on to that ‘coz I couldn’t think of any other character… I think so, in many ways I still relate to him the most. I don’t relate to any of the new China Rich characters, that’s a whole different world.” 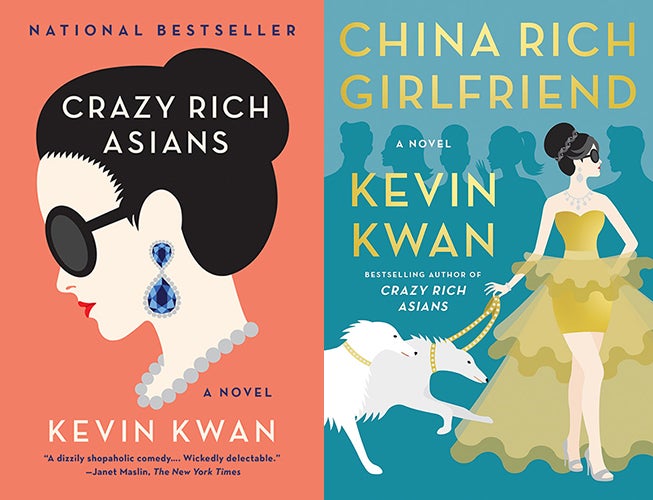 If it isn’t real, he wouldn’t put it in his books. Seriously. Tyersall Park is real. That Sky Garage thing is real – Kevin even posted a link to a video on Facebook.

If you didn’t think the apartment with the personal sky garage on each floor from CHINA RICH GIRLFRIEND really existed, check this video out…

He has a dream cast for the Crazy Rich Asians movie (which is really happening – the screenplay is finished!) but he can’t tell us. “With casting, it has so little to do with what your actual dream is but also logistically, who’s available, who wants to be in the movie, there are all these deals that have to be made between agents and agencies and you have to use this actor…  There are all these intricacies that I really am not a part of. I think it’s also unfair for me to say who I want or who I see as a character because I think that will really put anyone who’s finally cast into a disadvantage, you know. So I want to be very open.” 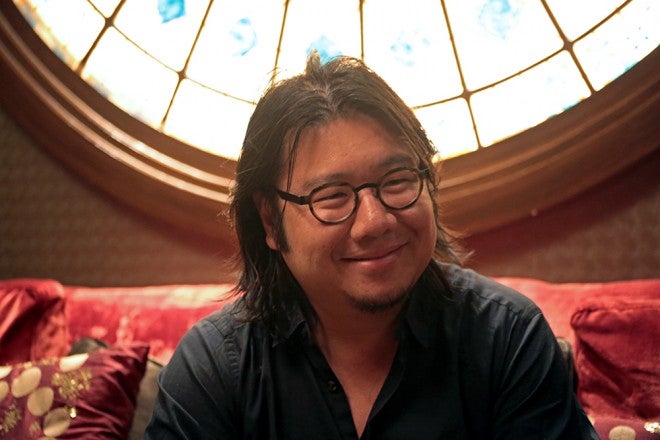 He was in high school when he realized he wanted to be a writer. “Probably 10th or 11th grade. That’s when I started taking writing seriously and discovering that I could write.”

He loves connecting with his fans on social media. “I really do. I love it, I don’t have enough time in the days to check my social media. I wish I had more time. When I do check it, it’s great to see and meet people and talk to people and I’ve actually made friends, really good friends, in the past few years, from social media.” And he loves seeing his Instagram fan photos. “It’s crazy what people do with the book. It’s so creative.”

He enjoys doing stealth signings—going to bookstores to sign copies of his books that are on display. “There was one reader there who got really mad at me when I was last in LA. ‘Why didn’t you tell me you were coming? Where are you now?’ I’m just dropping in at bookstores… I only had 10 hours in LA, I wanted to hit up the bookstores.”

On my way to Asia, I stopped by Los Angeles and did some stealth signings. Autographed copies of CHINA RICH GIRLFRIEND…

He loves fashion but he’s become more of a window shopper. “I really appreciate design and all aspects of design across all genres—from product design to fashion design. These days, I’m more of a window shopper. There was a time in my life where I really wanted lots of things, I was building up my wardrobe… These days, I’m just happy to look and appreciate and occasionally, when I see something I can’t live without… but I’m becoming much more of a minimalist than someone who is acquiring stuff. I have too much things already as it is.”

He curates crazy opulent finds for the Crazy Rich Collection, his online pop-up shop. “My publishers came up with it as an idea. For the first book, they thought it would be fun for me to curate a fun pop-up shop and that never happened because of logistics and real estate and all that kind of stuff. For the second book, we were like, ‘What if it’s an online pop-up shop? What if it’s really really the finest things in the world?’ And every piece is selected not by me but by my characters. What would Astrid want? She’d want this amazing handmade necklace from this lapidary artist Scott Diffrient. What would Eddie want? He’d want a really blingy pair of shoes, handmade shoes that they killed two alligators to get, you know, things like that. Carlon Bao would want a private luxury submarine. It was fun to imagine.. what they would truly covet. I thought it would be a great way to let my readers in on this world.”

There may be another Kevin Kwan book hiding on your bookshelf. When he isn’t writing his bestselling “Crazy Rich” books, Kevin, who is a Parsons graduate, works on visual projects as a creative consultant. And guess what? He was the art consultant and photographer for that gorgeous “Kate Spade  New York: Things We Love” coffee table book. “I love books, I love making books, I love being behind-the-scenes in the creation of books, especially visual books, coffee table books,” he sad. 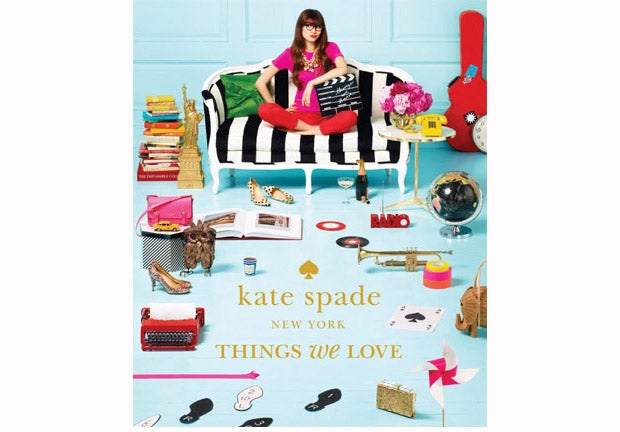 We may have lobster noodles and pineapple tarts on our food wish list but Kevin didn’t mean to make us hungry while reading his books. “I really enjoy reading about food in books and I actually love reading while I eat and I find that there are certain authors who just write books that are appetizing. You just want to read their books while you’re eating. So maybe that, in a very subconscious way, filtered through my descriptions of food and talking about restaurants. Because I’m such a foodie, I wanna know. I wanna know what my character is eating at these dinners, at these parties and things like that.”

He already knows what’s going to happen in book three. But there isn’t enough Hokkien mee in the world for us to bribe him into telling us.

And as a bonus, in this video by Tatin Yang, Kevin gives us tips on how to spot a Crazy Rich Asian: