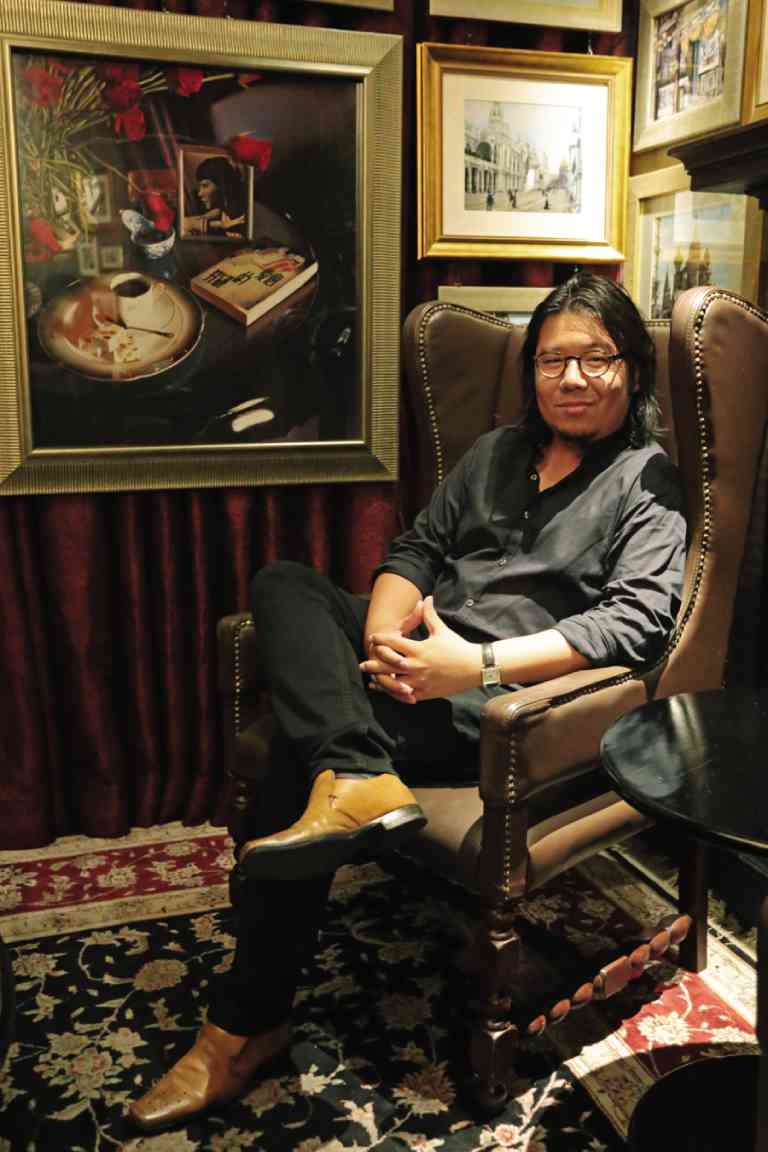 KEVIN Kwan, who is in the Philippines for the second time, spent five days in Palawan. “I absolutely loved it,” he said. His first trip to the country was in 1997 to visit a friend. KIMBERLY DELA CRUZ

Kevin Kwan: There’s nothing in my book that’s fake

I’m sorry, it’s so beaten up. I brought it everywhere, I couldn’t put it down,” I sheepishly tell Kevin Kwan as he begins signing my copy of his new book “China Rich Girlfriend.”

Here’s what I didn’t tell Kevin: His book is so hard to put down that I once read it in the shower.

And the craziest part? They’re all inspired by reality.

“I absolutely wanted to be accurate in how Asia was being portrayed. It was so important to me for the rest of the world to know this is happening, this is real. I think a lot of readers in the West still don’t believe it’s real, and I keep saying over and over again, there’s nothing in my book that’s fake. If I haven’t seen it, if I haven’t breathed it or tasted it, it doesn’t go in my book,” he said.

We are sitting in The Peninsula Manila’s 1930s Shanghai-inspired Salon de Ning, an appropriate choice, since Kevin’s fascinating second book “China Rich Girlfriend” takes his readers to Shanghai to get to know a whole new level of rich—China rich.

Fully Booked brought Kevin to Manila to meet his Filipino fans, but before that, he spent a few blissful days in Palawan, snorkeling, kayaking and discovering the joys of garlic rice and ensaimada.

(READ: 15 things you should know about Kevin Kwan)

You’ve said that your books were partly inspired by your upbringing. Has your family read the books, and how have they reacted?

A few of them have read my books. Just a few. A lot have not. I think, just because of the way my family is, there’s really no reaction, you know what I mean? (Laughs) They’re just silent.

So no angry phone calls?

No. If there’s anger, it’s just silence. My mother, for example, of course she’s read my book and she loves it. She’s very happy. But other family members, extended family, there’s been very little reaction. These are the ones in Asia. The ones outside of Asia, the ones who’ve moved, relatives in Canada, in Australia, the US, they love the book. They love the book. I think maybe it’s too close for the relatives that do live in Asia. They’re not seeing it maybe. Or, you know, it’s not important to them. They’re all too busy. Maybe. I don’t know. (laughs)

When you were writing Crazy Rich Asians, did you expect it to become this huge success?

Not at all. I didn’t even know if it was going to be published. I wrote it as kind of something I wanted to do as a passion. I wanted to tell this story and thought, worse comes to worst, I’ll self-publish it, give it to a few friends. I had no idea it would become what it is today.

Given the success of the first book, did you feel pressure when you were writing the second one?

I watched an interview where you said that the third book wasn’t guaranteed until the second one did well – it’s guaranteed now, right?

I don’t know. Ask my publishers. Call my editor and ask her. Call her.

We’re gonna call her. It has to happen.

Why did you say yes to Manila as one of the stops of your Asian tour?

It was because of the readers. Starting maybe two years ago, we began to see more and more followers on Twitter, Facebook, Instagram. I would see the presence of many Filipino readers and you guys are very vocal, you guys really know how to express yourselves… There was much positivity and support and love coming from the Philippines that I just felt that I had to come and check it out to see if it was real or not, or if it’s the same five people changing their names.

We know that you love food. Are there things you’re looking forward to eating while you’re here?

Wow… Even in the week that I’ve been here, I’ve fallen in love with many new dishes that I was never exposed to, like garlic rice, for example. It’s the best. And then there’s this amazing cake, ensaimada? Oh my gosh. Amazing, amazing. There’s so much kinship between Filipino cuisine and Chinese cuisine and I’m a kid who just loves rice. So anything with rice and gravy and sauce and meat… You can’t go wrong.

You have a couple of Filipino characters in your books—Laarni, the nanny of Eddie’s kids, and Evangeline and Pedro Paulo de Ayala. We want to know the inspiration behind these characters; were you familiar with Philippine society?

As you know, there are a lot of Filipinos working in Asia. I also grew with Filipino maids so they hold a very close place in my heart in many ways. Laarni was sort of the tribute to that, she’s very capable, she does everything, she’s kind of behind-the-scenes, in control. I knew a little bit of Philippine society from having visited my friend here many years ago. You hear about it occasionally in the news. You see pictures of all the glamorous people.

Do you ever have people who think they inspired some of your characters?

Are they ever right?

Who is your favorite character that you’ve written?

I would have to say it’s Eddie Cheng. It’s always more fun writing about villains or nasty people. But he’s not really nasty, he just has a lot of interesting quirks.

Do you have people who flaunt their wealth in front of you just because it’s you?

You know, I’ve seen that happening with more frequency.

No, I don’t judge it at all. I’m sort of fascinated by all types of people. When I was visiting China and doing research for the new book, there were a lot of people who came out of the woodwork, who wanted to meet me, wanted to show me lots of private things in their lives. It’s been fascinating. And you know, aside from the luxury and the wealth, I appreciate great design, I appreciate great art. I’m happy to see what people have to show me.

We are all dreaming of watching “Crazy Rich Asians” on the big screen. Is the screenplay finished?

The screenplay is finished. And it’s really amazing. Now we’re moving into the next stage, which is the casting and all that kind of stuff.

What’s your writing process? Do you have writing rituals?

The first book I didn’t, because it was written over three years in various sporadic places and times. The second book, I had to become disciplined because I had to write the book in a year. So I was writing literally all the time, but I found that I was most productive in the mornings. So I would turn off my computer, turn off my e-mail, turn off my phone until 2 p.m. so I’d have 8 a.m. to 2 to really just work without interruption.

How much fun did you have writing the footnotes? Our favorite was “Mrs. Chan, I still hate you.” And have you heard from her?

I have not, and I would be afraid to hear from Mrs. Chan since she terrorized me. It was really a lot of fun writing the footnotes to add another layer of humor into the book. I had a great time doing that.

Is it all mapped out? Do you know what’s going to happen in the third book?

I do. I actually knew more about what was going to happen in the third book than in the second book.

What’s your favorite thing that a person has said about any of your books?

There was a reader who once tweeted, “Astrid Leong is my spirit animal,” and I love that.

We were surprised to discover that you also worked on the Kate Spade “Things We Love” book as photographer and art consultant. How do you balance your love for photography, art and writing?

It used to be a lot easier. I’ve had to really leave behind a lot of my consulting the past couple of years because it just got too busy with writing the second book and the movie and stuff like that. But I really hope to go back to it because I love books, I love making books, I love being behind the scenes in the creation of books, especially visual books, coffee-table books. There’s a whole different process of doing that than there is writing a book that’s all text. It’s like putting a whole other project—there’s designers and writers and all these other people involved, and photographers.

What’s the most “Crazy Rich Asian” thing about you?

Um, I don’t know… I’m not a Crazy Rich Asian, I can’t even begin to say… You know, I really love hotels. So maybe that’s a CRA thing. I’m very at home in hotels.

I read primarily nonfiction. It’s all very issue-oriented, it’s very topical based on what my interests are any given week. I just recently read a book about Los Alamos, the nuclear lab. “109 East Palace,” that was the name of the book. I’m very curious about all sorts of things.

Carbs? I eat way too much carbs. Too much noodles, too much pasta, too much rice.

Hmm. Um, really good tea. I’m really into tea, I drink it three or four times a day. Right now, I’m really liking Margaret’s Hope Darjeeling. It’s a type of Darjeeling from a certain region. I really love it. Whenever I find it in different tea vendors, I try to get it. It’s usually the most expensive tea out there.

(Laughs) You ask all the good questions. Um, you know sometimes I just have to have a bag of Cheetos.

How do you feel about people comparing your work to “Downton Abbey”?

It’s the most flattering comparison in the world.

Does the rest of the world have anything to learn from the real Crazy Rich Asians of the world?

I think the most obvious one is that money doesn’t necessarily buy happiness. Very wealthy people sometimes have very, very big problems.