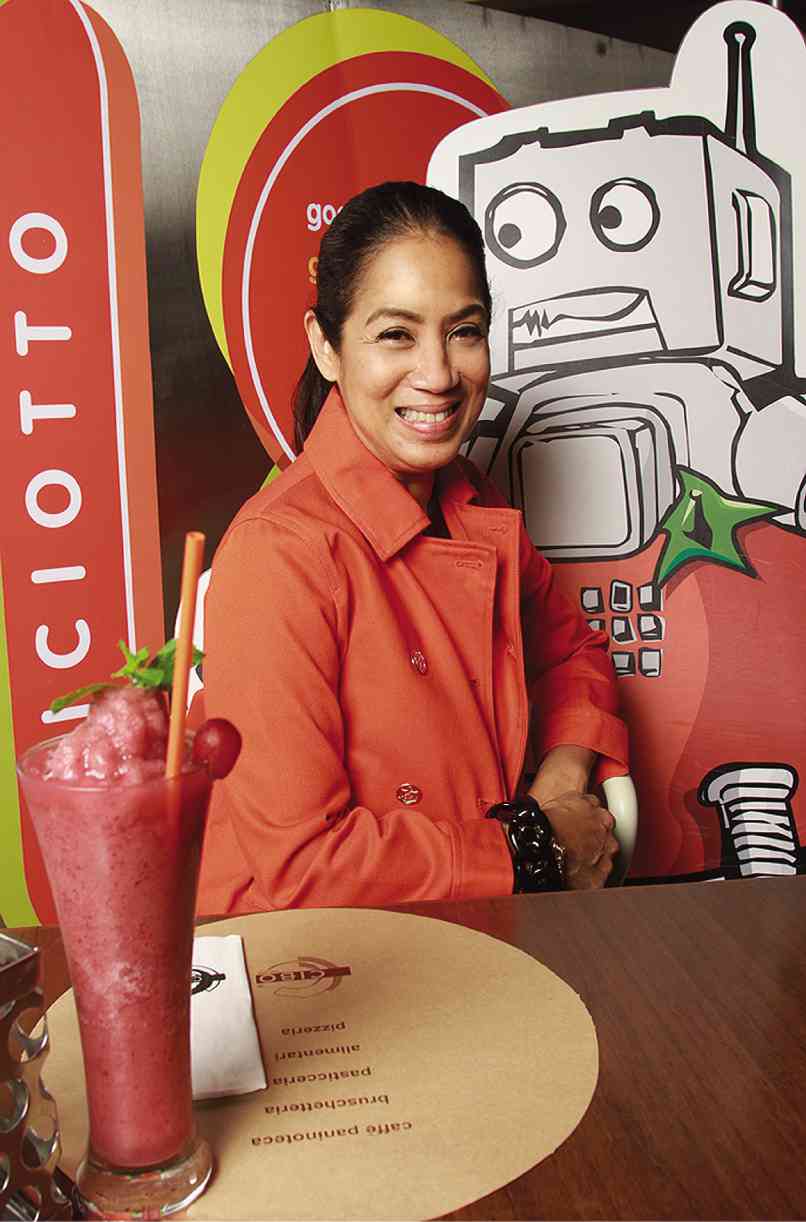 Irresistible deals at Cibo till Sept. 30

The deal is irresistible: the lengthy thin but puffy pizza, topped with moist pork, tomatoes, cheese, cured Italian ham or mushrooms and crisp salad greens, pegged at its regular price. But its partner dish, a choice of creamy penne with squash flowers and walnuts; linguini with squid ink sauce; or butterfly-shaped pasta with stewed tomatoes, squash flowers and zucchini, costs only P18 each.

The virtual giveaway is Italian restaurant chain Cibo’s 18th-anniversary offering—18 pairs of food at special prices from Mondays to Thursdays.

The dishes have been the favorite of its clientele through the years.

The spinaci zola or classic spinach dip with gorgonzola has been the unprecedented best seller. Its buttery texture gets children to eat their vegetables.

“Bimbi” is Italian for children. The Cibo Bimbi event will be a coming-out for Cibot, the restaurant’s mascot.

Through the years, Cibo has been engaging its young customers with Cibots—cartoon characters named after vegetables, such as Zucca (squash), Pomodoro (tomato) and Spinaci (spinach). These veggies are prime ingredients of the restaurant’s top sellers.

While waiting for their orders, the kids are given crayons to color their paper place mats illustrated with Cibots.

Cibo Bimbi was borne out of a market trend, says Forés.

“Clients told us how their kids love our food. It was a phenomenon for us. We acknowledged it with a store like Cibo Bimbi and developed relatable characters like the Cibots that would remind the kids to eat their vegetables. It has been our advocacy to educate them on healthy eating at an early age.”

The kids who grew up with Cibo are the millennials—born between the early ’80s and the early 2000s—a significant market for most restaurants. It’s a market that eats out more often; favors fast casual dining; and cares about consuming fresh, less chemically grown foods.

One of the reasons for Cibo’s longevity is its adaptability to the market without compromising quality.

After coming back from Italy where she studied its cuisine under the best teachers, Forés tested her knowledge and skills at Ali Mall’s Trattoria Uno, a country-style Italian restaurant owned by her uncle and Italophile, Jorge Araneta.

It took Forés 10 years of catering experience before she finally ventured into restaurant operations. Her core management team traveled to Italy to immerse themselves in the culture and cuisine.

“They had to experience the lifestyle to appreciate what we’re striving for,” she says. “They need to touch and see how crops are grown, understand the climate conditions… It’s easier to handle ingredients if seen in their context. The management team brought back their learnings and shared them with the staff.”

Cibo opened at Glorietta at Ayala Malls in 1997, a time when Filipinos associated Italian food with southern-style heavy tomato sauce, garlicky flavors and the Italian-American influence of doughy pizza with gooey cheese. For instance, pasta Bolognese, whose sauce was made with minced beef and tomatoes, was ruined by white sugar to cater to the local palate.

Forés, immersed in the cosmopolitan cities of Rome and Milan, went against the current and introduced light Italian meals of panini or grilled sandwich with crispy chips, sour cream and rock salt, and cream-based pastas influenced by Italy’s northern cuisine.

Classic dishes are served the authentic Italian way. Instead of adding sugar to tomatoes, Forés works with suppliers who can provide the juiciest tomatoes that don’t have the acidity of the common varieties. Cibo’s Bolognese pastas adhere to Bologna tradition of using hearty, slow-cooked beef ragout with no sweeteners.

Pizzas came in after a few years.

“I didn’t want to dabble in pizza unless I learned the mother recipe,” says Forés. She and her team flew to Naples to learn the art of making pizza, and to follow its protocols that would produce its authentic, subtle and complex flavors. Today Cibo uses Caputo, the best brand of Italian flour for pizza dough, imported by Bacchus International. Finely ground, Caputo has low gluten content, which produces the perfect elasticity for the dough.

Yet, despite introducing trends and reinforcing the Italian tradition, Cibo still had to adjust to the local market by integrating rice and chicken into the menu.

“For the longest time, we were serving pizza, pasta, salads and sandwiches,” Forés recalls. “Feedback from guests said rice was the deal-breaker. If they would choose another restaurant over Cibo, they would go to a place that served rice. When we widened the range of our entries, the market changed its perception toward us. Today our concept is more complete.”

Aside from being a purveyor of Italian cuisine, Cibo was an early adaptor to the local organic-food movement. Eighty-five percent of its ingredients, including herbs, poultry and vegetables, are cultivated

under healthy and eco-friendly farming methods. In the past decade, more restaurants and groceries have been stocking up on organic produce.

The new items on Cibo’s menu will incorporate more locally produced products. One of its suppliers, the Negros-based Casa del Formaggio, produces Italian cheeses made from the milk of grass-fed cows.

Once hard to import, the soft stracchino, creamy pouches of burrata, and the intense caciocavallo cheeses can now be had. There are also plans to introduce squacquerone, a tangy fresh cream cheese, which goes with piadina, Italian flatbread.

Meanwhile, Cibo will be opening its 11th branch at the SM Megamall Fashion Hall. The other branches will be undergoing a facelift.

On the foods’ consistency, she says the mother sauces are made in her commissary.

Cibo’s #18PairsFor18Years promo runs through Sept. 30 in all outlets.