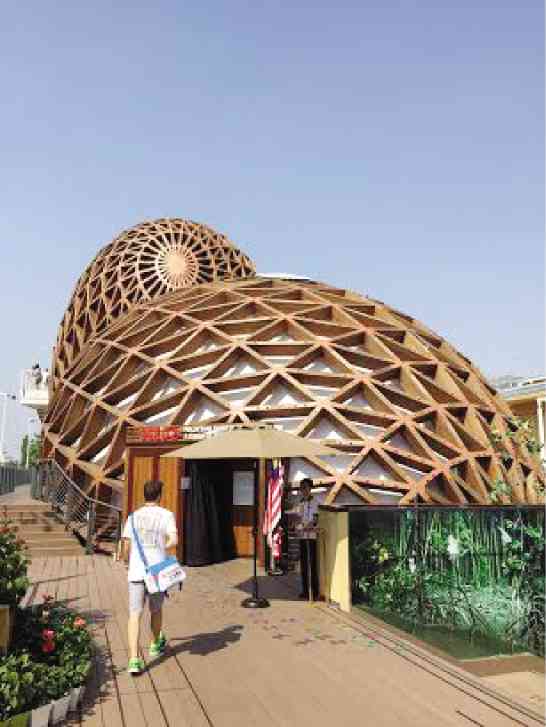 INSIDE Malaysia’s domes are presentations on a sustainable food ecosystem. PHOTOS BY ANGELOCOMSTI

Ideas and food–from more than 140 countries

All foodies dream of traveling the world and sampling what every country has to offer gastronomically. Well, that pipe dream unfolds in Italy with the ongoing Milan Expo 2015.

Adopting the theme “Feeding the Planet, Energy for Life,” the international food exposition held every two years features what each participating country has achieved in terms of innovation, production, safety, balance and sustainability.

The fair opened on May 1 and will run till Oct. 31, allowing millions of guests to partake of a healthy exchange of ideas and taste the world’s specialty dishes, including the cuisine of more than 140 countries.

Situated in the municipality of Rho, northwest of Milan, the expo can be quite overwhelming as it occupies over a million square meters of space.

The venue looks like an expansive village lined with various attractions: a palace from Qatar; a stylish beach house from the Czech Republic; a vast vertical garden cultivated by a team from the United States; and a fancy playground from Brazil.

Holland has a Ferris wheel bar, while France has a patch of field growing tomatoes, corn, wheat and strawberries across the pavilion.

Poland has three long flights of stairs decked with wooden crates that lead to a sky garden encased in mirrors; Slovenia allows visitors to take off their shoes and walk on a sandbox full of Piran salt; and the United Kingdom invites visitors inside its “hive of innovation”—a dome structure with bulbs at the joints that dramatically light up at night.

There’s a lot going on and each country has apparently invested much effort and thought in producing such grand structures and presentations.

It is easy to get lost in the wonderful visual display of each pavilion, but one should not neglect the wealth of information on every country’s agricultural processes and traditional cuisine.

Israel has interactive videos that show not just its food but also how its people has successfully developed farming despite water supply problems, while Nepal highlights its range of crops grown in high altitudes in which biodiversity is preserved.

Russia tackles the issue of food security and how its natural resources and agricultural heritage are working toward guaranteeing supply for the future. And Belarus, as suggested by its wooden wheel structure, defines its active role in the fight against water shortages and hunger.

There’s much useful information going around the expo; even the trivial facts are delicious food for thought. Did you know that 1/5 of food professionals in Belgium are bakers? That 80 percent of the Irish farmland is grass and is double the European average? And that in Liguria, Italy, the locals are growing terrestrial crops such as basil under the sea, inside air-filled biospheres?

Apart from enlightening presentations about a particular country’s cuisine, each pavilion also serves its food specialties and bring-home packaged goods.

But careful on spending too much or putting on extra weight; it’s wise to pick only the most interesting or unique foodstuff.

The US pavilion shows how Louisiana favorites, such as beef brisket sandwiches and lobster rolls, are served in trucks dressed in red, white and blue.

Tunisia has a couscous bar, Morocco serves its infamous beef and chicken tagines, and Mexico pulls in the crowd with its tacos al pastor and ice-cold Corona beer.

Some of the items that pique our curiosity are the crocodile burger from Zimbabwe, the kibeba with stewed cuttlefish, okra and denden pulp from Angola, the game rissole from Austria, and the locos mayo, or abalone with mayo, from Chile.

Among those we got to taste, not to be missed are the arepa de huevo and patacon pisao from Colombia, pao de queijo from Brazil, and the wide array of wine at the Italian pavilion, which lets you sample three from over 1,300 open bottles for only 10 euros.

It’s a pity that the Philippines decided not to participate, since it could have reinforced all the good press from its hosting Madrid Fusion Manila.

Regardless, Milan Expo 2015 will surely whet the appetite, increase knowledge about food, and excite the mind on what’s next.