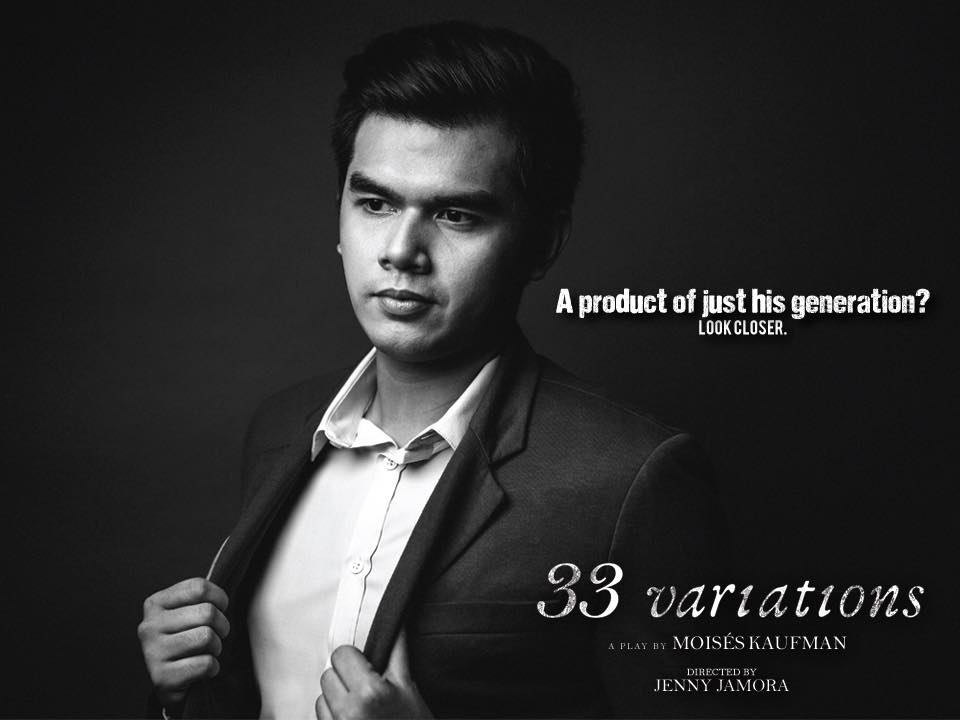 A few months ago, young composer Ejay Yatco had to ask his classical music teacher if he’s doing Beethoven right. He had to relearn everything, practice like hell 24/7 before he plunged into Red Turnip Theater’s “33 Variations.”

One can imagine Yatco pounding the battered ivory keys like a madman, hair and clothes disheveled, probably with near empty bottles of red wine or whiskey on top of the piano, musical scores ripped, crumpled and thrown all over the room.

Then again we could be imagining things.

Music and alcohol do mix well anyway, like Ludwig van Beethoven during his peak, the time he did one of his masterpieces,“Diabelli Variations,” Op. 120. It was a commissioned piece by publisher Anton Diabelli, who wanted variations of a waltz melody he composed. Diabelli presented the melody to various composers, including Franz Schubert and Franz Liszt.

Though Beethoven initially disdained Diabelli’s piece, he was able to come up with 33 variations, which music historians and musicologists consider as among the masterpieces of classical music for all time.

And Yatco as the young Beethoven has been playing these variations before a live audience for four weeks now at the Whitespace on Pasong Tamo Extension in Makati City. He’s been playing the pieces five times every weekend to be exact. Today, August 23, he’ll play them twice for the last time at 3 pm and 8pm as Red Turnip Theater wraps up the local staging of the acclaimed work by Venezuelan playwright Moises Kaufmann.

Unless you’re living under a rock, or have been under the spell of “Rak of Aegis” in the past months and won’t venture into the other side of Metro Manila, you’re missing a lot. Actress Jenny Jamora has been praised to high heavens for her work as director.  The actors Teroy Guzman (as the older Beethoven), Rem Zamora (Anton Schindler), Paolo O’Hara (Diabelli), Shamaine Centenera-Buencamino, Roselyn Perez, Ina Fabregas and Franco Chan have been much applauded as well for magnificently re-living the story in RTT’s signature a-table-here-and-a-table-there-designed stage.  Once again, it’s your imagination that supplies the details.

To satisfy our curiosity, we threw Yatco a couple of questions.

After 3 weekends and playing in about 15 shows, how does it feel?

I feel extremely grateful that Jenny gave me the opportunity to be a part of this. It’s such a unique show since I have to be a musician and an actor at the same time. I was trained as a classical pianist since I was 5 years old then I ventured into musical theatre when I was 17. This production has allowed me to apply both my classical and theatre backgrounds.

Would you consider that everything’s smooth sailing already?

With this material, I always have to be on my toes and constantly train because of the difficulty level of Beethoven’s pieces. Aside from playing the variations, I also do some acting in the show so I have to make sure that I get the technique and notes down before I let go of everything and become a character.

So usually right before the show I sit down on the piano and go through all the difficult parts. Every show we do feels like a new one, and considering the heaviness of the material, it never gets easier to perform.

And this being the first time you are part of a play on stage playing yourself.

In my first rehearsal with our director Jenny, she made it clear to me that she didn’t want me to just be an accompanist for the show she wanted me to be a character since the music was so integral to the play. So in the show, I play a younger Beethoven, basically Beethoven’s state when he composes his songs, his consciousness. This is the first time I had to play the piano as a character in a show.

Personally, what do you think of Beethoven as a musical artist?

Beethoven is my favourite classical composer. He was the pioneer who ushered the classical period into the romantic period. In his time, his style of music was so different, something nobody has ever heard before. Despite going deaf, he didn’t give up on music. He created masterpieces. The worst thing that can happen to a musician is to lose his hearing. Yet he overcame that and changed the face of music forever.

How would you describe the variations?

As mentioned in the show, the “Diabelli Variations” is Beethoven’s longest piece for solo piano and is arguably one of the greatest variations ever made. It requires a high level of technique and skill to pull off. But more importantly if I were to describe the piece I would say it’s very uplifting and liberating.

The piece starts of as a simple waltz then takes the listener to a higher plane of emotion and spirituality. Totel V. de Jesus, INQUIRER.net

(“33 Variations” will have its final two shows today at 3 pm and 8 pm. Call Ticketworld 8919999. Tickets are also available at Whitespace.)