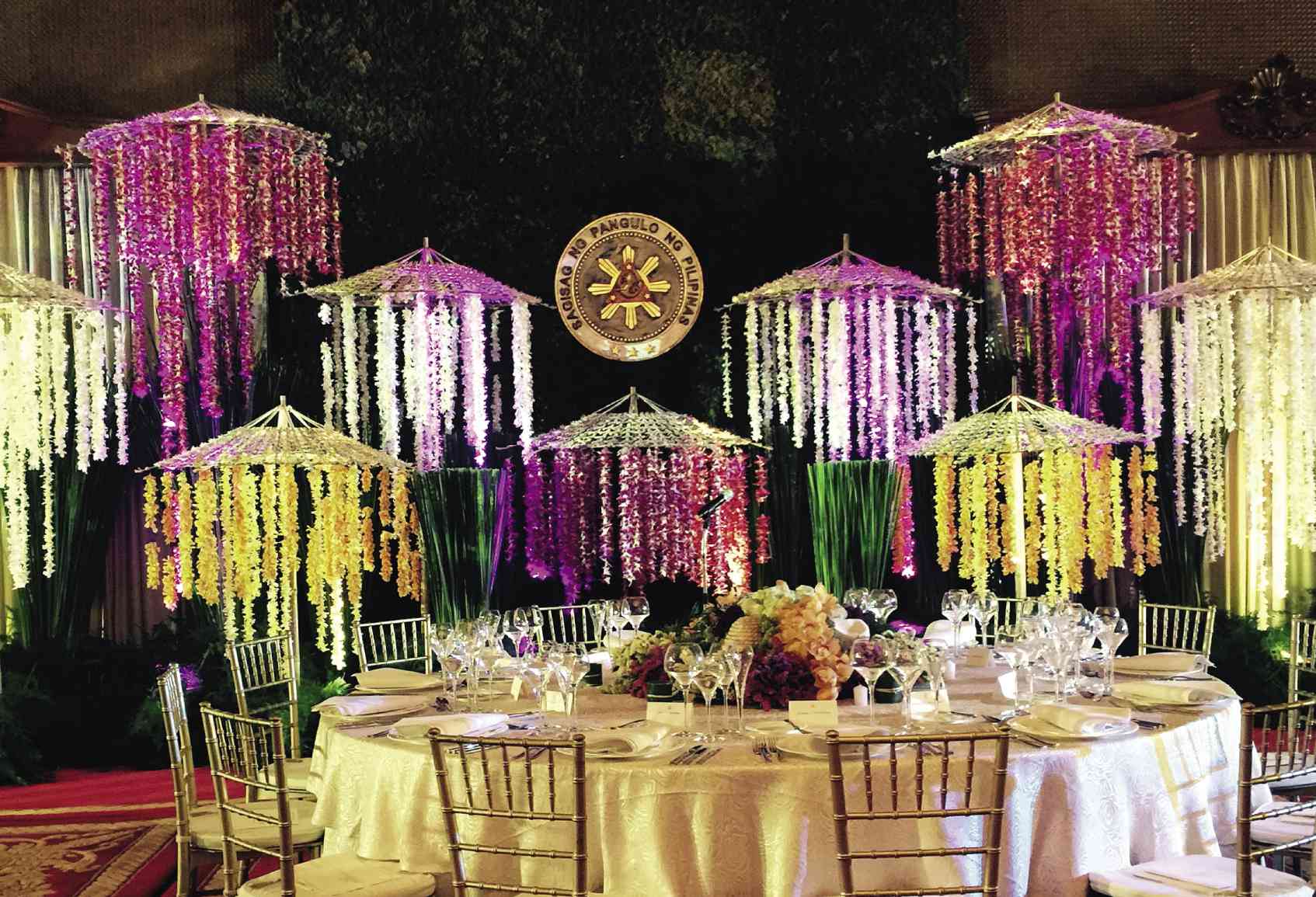 DIPLOMACY P-NOY STYLE At the lunch on Friday to honor visiting official Thai Prime Minister Prayut Chan-o-cha at Malacañang, Filipino craftsmanship and indigenous flowers came to the fore in these umbrella chandeliers made of handcarved bamboo from which hang our orchids. INQUIRER

With that ice-breaker delivered with warmth, if not fondness, visiting Thai Prime Minister Prayut Chan-o-cha began his remarks at the luncheon hosted by President Aquino in his honor at Malacañang on Friday.

The two heads of state delivered a toast to the continued stability and prosperity of the Philippines and Thailand, and to their close partnership for more than six decades.

The Thai prime minister also cited the Philippines’ annual economic growth rate of 6.2 percent, the highest in the past 40 years.

The substance of such official pronouncement was underscored by a setting that showcased the resources the two countries have in common: orchids and beautiful crafts.

The setting was natural and exotic, yet elegant and simple, quite in keeping with the understated style of previous state receptions.

Philippine orchids hung from umbrellas crafted from bamboo, an arrangement that served as chandeliers hanging above tables spread out in the banquet reception at Rizal Hall.

Upon closer look, the umbrellas showed intricate carvings of birds in flight—a craft perfected by Filipino artisans. Clusters of tall green stalks were set up strategically at the reception area, garlanded by orchids as well.

Blooms in summer colors of purple and yellow made up the table arrangements, while ethnic music, performed on indigenous instruments by Makiling Ensemble, greeted the guests as they walked in.

The Philippine Pops Orchestra played a mix of well-loved OPM (original Pilipino music) as the courses were being served.

Gary Valenciano brought in a romantic mood with “Ikaw ang Lahat sa Akin,” said to be one of Mr. Aquino’s favorite songs. He then revved up to his signature beat with “Lean on Me.”

The entire cast, with Makiling Ensemble and AMP Band led by Mel Villena, capped the lunch with “Piliin Mo ang Pilipinas,” an uplifting song that infused the rainy day with high spirits.