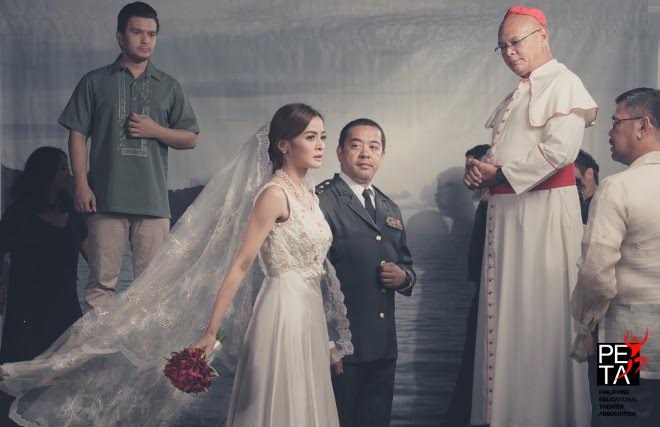 “The play will tell our young audience it is time for a change,” says director Soxie Topacio. PHOTO FROM PETA

How to make Rizal relevant to millennials

Colonial oppression by foreign invaders is no longer the enemy; rather, it’s corruption by one’s own countrymen, to the detriment of the entire community. And while social justice, democratic governance and populist participation will remain at the center of the story, expect the romantic aspects to play a marked, visible role.

That, in a nutshell, is the formula the Philippine Educational Theater Association (Peta) is employing to update José Rizal’s novels, “Noli Me Tangere” and “El Filibusterismo,” and make them not just relevant and relatable, but also exciting enough for the millennial generation.

Its restaging of “Noli at Fili  Dekada Dos Mil,” written by Nicanor Tiongson, directed by Soxie Topacio and first staged in 2008, removes the events from its historical Spanish-era setting and transposes it to contemporary Philippines. The setting is now a provincial town where certain members of the elite—government officials, the military, the clergy—hold tremendous influence over a community slowly being deprived of its rights and heritage.

The catalyst for the play’s conflict are flash floods that would lay waste to the town, its rice fields, schools, churches, and homes—the result of illegal logging activities that could not be stopped because of widespread local corruption. This vision recalls the 15-to-20-foot floods that swept through the towns of Infanta, General Nakar and Real in Quezon Province some years ago, where about 3,000 people died in the calamity.

Tiongson compressed the two novels of Rizal into one narrative, while Topacio assembled a 17-man ensemble, mainly homegrown Peta talents, to bring to life the immortal characters of Ibarra/Simoun, Elias, Maria Clara, Padre Salvi, Kapitan Tiago, etc., but in a language and with behavior that their own peers could understand.

“Both my young audience and my actors who are in their 20s are not fully aware of the context of the play,” says Topacio. “The Infanta calamity happened seven years ago, and these people were very young then.”

To fill this gap, Topacio invited government officials from Infanta who had endured the calamity and have had years of experience with small-town corruption to interact with his young ensemble. Meanwhile, for his young audience, he has prepared news footage to be shown during the play, along with an arresting opening scene that reenacts, with real water, the horror and fury of the floods.

“Long before our ‘Rak of Aegis’ poured water on this stage, this play [in its initial staging] had done it,” says Topacio with a chuckle.

To Tiongson, the overall shadow of corruption is the factor that should make this combination of “Noli” and “Fili” a matter of urgent viewing for his audience, especially with the 2016 elections mere months away.

“The oppressors are the capitalists collaborating with corrupt government officials to continue illegal logging activities,” he says. “The local government is against logging, but can’t fight it because the big loggers and businessmen invest heavily in the elections. The conflict is no longer against colonial, it’s social.”

As with most plays intended for a school-based audience, this one has a message. Tiongson defines it this way: “Be careful with the people you elect. Because if the ones who support them are the big companies, you know who they will side with. It is a tough battle to fight because of the money that supports the big players.”

The white knight in this play is Ibarra (played by Lucho Ayala), at least in the first act. The rich son of a wealthy family who has the town’s best interests at heart, he is idealistic enough to believe that changes can be done.

Naturally, as in “Noli,” his plans are thwarted time and again by dark forces he cannot overcome. Ibarra sees his beloved Clarissa (a.k.a. Maria Clara, alternately played by Kris Bernal and Liza Diño-Seguerra) married to the town commandant Salvi, while a frame-up forces him to run to the hills and become a fugitive.

The “Fili” plot continues in the second act. Ibarra is now a rebel named Simoun who uses his newfound power to commit even more abuses on the townsfolk to force them to take arms against the powers-that-be. A huge part of his plan involves rescuing Clarissa, which does not sit well with his fellow rebel leaders who believe personal interest, and not the public good, is fueling his motivations.

Topacio hopes that this more concise version and its snappy pace will keep the audience interested and enthusiastic. Still, amid the sober issues and the grim subject matter, Topacio isn’t forgetting the romance.

“Look at all the heroes in these novels,” he points out. “Simoun mounts his revolution because of Maria Clara. Basilio becomes a medical student because he wants to give Juli a good future. Isagani saves the doomed wedding party guests because of Paulita. All these men are in love!”

And while a much younger Topacio back in the 1970s questioned how Simoun’s romantic motivation made him a hero, he has decided to use the amorous elements in Rizal’s novels to make this “Noli-Fili” more engaging to today’s audiences.

“The ideology will go fast with them,” Topacio says, “but the romantic encounters will keep them riveted.”

That rosy-colored aspect is also present in the play’s ending. In Rizal’s “Fili,” Padre Florentino admonishes a dying Simoun that his plans failed because it was motivated by greed and hatred. Instead, he advises a return to nobler values that, over time, will help overthrow the oppressive system.

Tiongson’s script builds on that principle. “The play will tell our young audience that it is time for change,” says Topacio. “And leadership does not fall on just one person, but on the many.”

Peta’s “Noli at Fili Dekada Dos Mil” opens at the Peta Theater Center on Sept. 10. Call 7256244; log on to www.petatheater.com or ticketworld.com.ph.