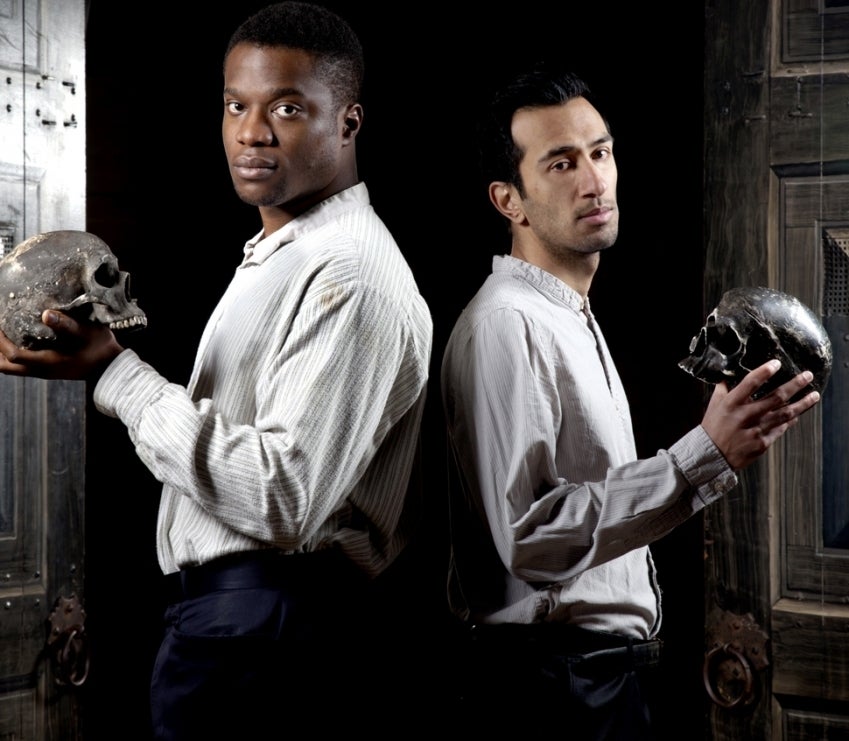 Hamlet” has landed. In 2014 the Shakespeare’s Globe touring production of The Bard’s classic tragedy kicked off in London to make its way around the world. The two-year project is scheduled to end back at the Globe (with a penultimate show at Helsignør, Denmark) in 2016.

On Aug. 23, the tour stopped in the Philippines (as the 125th out of 205 countries) for two performances at the Cultural Center of the Philippines’ Little Theater.

What kind of show has Shakespeare’s Globe sent out into the world? A very lively one, a brisk, energetic production that turns its very portability into a virtue. The necessarily modest set is made of parts easily packed up and carried away: partitions that are merely tarps tied to poles, trunks and chests moved around to become different kinds of furniture or objects (arranged in a “U,” they become the grave Ophelia is buried in), planks that become tables or the corners of battlements, a curtain strung from a rope supported by poles at the end of the stage.

A chalk outline on the floor suffices for the borders of the playing space. Costumes are workmanlike and suggestive, the addition of an item—a hat, a vest, a pair of glasses, a cape, a beard—enough to signal a change of character.

Artifice is proudly worn on the sleeve. Actors not involved in a scene sit on stage quietly, playing a fiddle or a drum or striking a cymbal. “These are actions that a man might play,” Hamlet tells his mother, protesting that his grief is real even though its external signs—tears, sighing, dark clothes—can be mere pretense, and this slippery divide between the real and feigned becomes the show’s emblem.

From the very start the audience is made aware that we are watching performers putting on a show. In fact, before the show begins, the actors drift onto the stage, putting on costumes, rearranging props, chatting with the audience, before bursting into a song that announces their itinerant nature (its chorus is “A-roving I will go”).

This production harkens back to older times, when an improvisatorial ethos ruled the day. English theater used to involve plenty of touring, and Shakespeare’s company of players were used to lugging their props and costumes into carriages and setting up shop in the countryside, in times of plague perhaps, and with meager means put on shows in whatever unlikely spaces they could find.

An important ingredient of touring is actors who can play multiple parts. Scholars say Shakespeare probably had no more than 14 players do dozens of roles at any given time, and this small crew of 12 (of diverse ethnicity, too) does the same.

(The changeability makes practical sense. At the open forum following the first show, the cast revealed that the actor who was to play Horatio hurt his back the day before and couldn’t perform, so another took his place without missing a beat.)

The house lights are left softly on, supposedly to give the audience a glimpse of the Globe theater’s open-air atmosphere. With no need to dim the lights between scenes, and with a tight space for moving about, the story moves at a fast clip, with actors walking in to start a scene before those in the previous one have left.

The text is trimmed, probably as an accommodation to the audience (the three shows I saw at the Globe in 2010 lasted at least three hours each), to about half of the original text. The show lasted two and three quarters of an hour, with a 15-minute interval, brief for a Globe production, and for any “Hamlet.”

In typical Globe fashion, though, archaic terms are left as they are (“miching malicho” instead of malicious mischief, “clouts” instead of clothes).

The best moment: the play-within-a-play. With a swish of the curtain, the stage where Claudius and his court sit to watch the visiting troupe of actors becomes the stage used by the players (played by the same actors), whose droll dumb show gets the crowd roaring. (It’s always a hit, they said at the open forum.) Then with the curtain drawn and pulled open again, it is back to Claudius and the court, flummoxed by what they’re watching. It’s ingenious, the epitome of this Hamlet’s theatrical resourcefulness.

The performers, who have done nearly 200 shows, tear into the play with a well-oiled efficiency. (Not a surprise, that. When I had the good fortune to catch “The Merry Wives of Windsor” on opening night at the Globe, the production had the smooth, professional sheen of a show that had been running for weeks.) The performances are uniformly commendable. 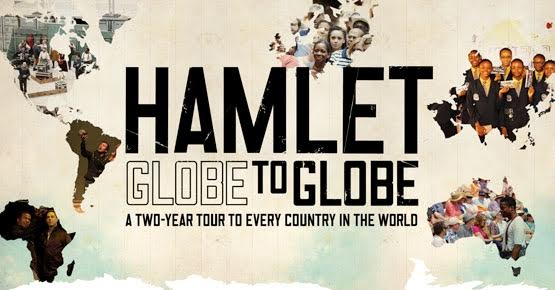 The disappointment is that Shakespeare’s Globe gives us the “Hamlet” we’ve all come to expect: cerebral but ineffectual, losing himself in thought and unable to act. At least that was the reading of Naeem Hayat, who played the lead in the first show.

Young viewers will see some of David Tennant, who played the lead for a Royal Shakespeare Company production in 2009 available on video, in him. Both have the same tall, wiry frame and lean, pensive countenance. But Hayat lacks the impish malevolence Tennant brings to the role, and his Hamlet’s bursts of violence and bouts of indifference (he doesn’t much care about sending Rosencrantz and Guildenstern to their deaths, for instance) don’t ring true.

In the second show, Ladi Emeruwa, of more athletic carriage (suggesting Kenneth Branagh or Mel Gibson) and more princely bearing, comes off weakly. His voice is rich and sonorous, but his Hamlet seems oddly serene, meditative and his soliloquies sound more like measured decision-making than a grappling with inner turmoil.

As the first show proceeded, a fear crept into my head, that the trade-off of doing a “logistics-confounding” tour (according to the program notes) is timid storytelling. On the Shakespeare’s Globe website, Dominic Dromgoole, the company’s artistic director and the director of this production, says, “The central principle of the tour is that Shakespeare can entertain and speak to anyone, no matter where they are on earth.” Hence, the story shorn of a political backdrop or historical markers, its characters conventionally understood (Hamlet as wussy intellectual, Polonius as doddering fool and so on).

The inadvertent consequence of this principle and the decisions that cascade from it is an approach that takes no risks. Despite being smooth, spirited and inventive, the show is never quite absorbing. This is textbook “Hamlet,” a simple, inoffensive production that all audiences should find likable enough.

But then, to take this production on its face may be unfair. It is, after all, the second step in a project that began earlier.

Before the tour kicked off in 2014, Globe to Globe began in 2012 as a project to bring Shakespeare productions by companies around the world to the London theater. That festival saw 37 productions in 37 languages performed over six weeks. Every year since, a handful of new productions is brought in. The company’s website says that in 2015 a “Richard III” in Mandarin and a “Macbeth” in Cantonese took the stage.

So in 2014 came the return gesture, this worldwide tour taking this very British version of “Hamlet” to every country in the world. The program notes tell us that the tour is “part of [the Globe’s] continuing ambition to promote an open and joyous conversation across languages and borders through the medium of Shakespeare and theater.”

Watching “Hamlet” without having been to the 2012 festival gave me the impression that this conversation was one-sided. The truth is, we’ve been conversing with Shakespeare for quite a while.

How about a festival in which this production is followed by a performance of “Sintang Dalisay” (“Romeo and Juliet”) and “Ang Pagpapaamo sa Maldita” (“The Taming of the Shrew”) by Tanghalang Ateneo, then “Haring Lear” and “D’Wonder Twins of Boac” (“Twelfth Night”) by the Philippine Educational Theater Association, then “R’meo Luvs Dhewliett” and “Der Kaufmann” (“The Merchant of Venice”) by Tanghalang Pilipino?

That would be a dream festival, an open and joyous conversation, and one devoutly to be wished.