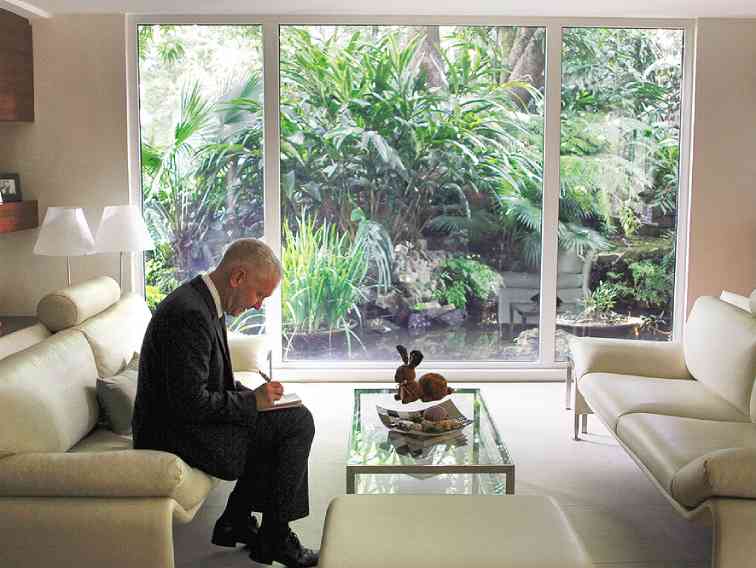 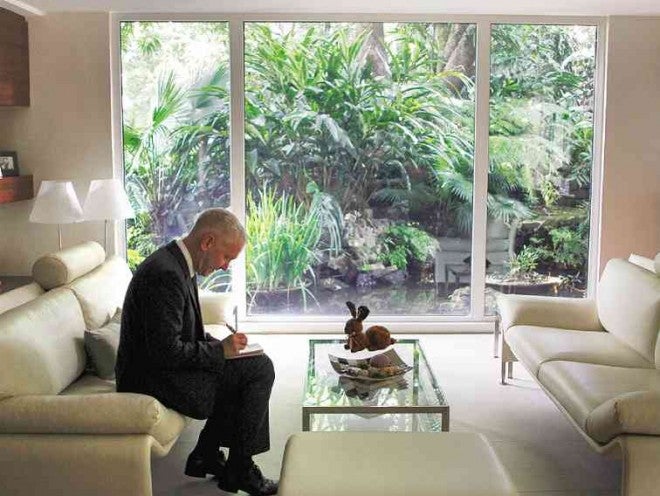 Paintings by two Filipino artists and a charming white askal named Benji are three beloved possessions that Swiss Ambassador Ivo Sieber and wife Gracita will definitely bring to Bangkok when the envoy begins his new assignment there later this month.

“Martin is going to Bangkok,” Sieber says, referring to an impressive, predominantly red painting by Martin Honasan that greets guests at the anteroom of the Swiss official residence in Forbes Park, Makati City.

“And Betsy,” Gracita pipes in. The couple brings Inquirer Lifestyle to the dining room to see one of Betsy Westendorp’s dreamlike “cloud” paintings that hovers over a lengthy modular table.

Sieber then turns and sees Benji, aka His Serene Highness Hubert von Hundkeler, a part-Dalmatian mongrel that initially captured the hearts of the envoy’s two daughters Katrin, 21, and Nina, 19, before eventually endearing himself to the entire household.

The mongrel looks so nondescript one would wonder why the lucky mutt enjoys so much attention in a diplomatic residence.

“There was a long negotiation with my daughters before the dog arrived,” Sieber explains. “We were moving all the time because of my work, but now we have a garden.” Apparently, the girls felt all the space inside the official residence would be a waste if a pet were not around to enjoy it with them.

“So we made an agreement. I will pay for the dog and not do anything else except give him a name. I chose ‘Hund’ because it means ‘dog’ and ‘Keler’ is a common name in Switzerland. They said it’s a dumb name. They call him ‘Benji,’ I call him ‘Hundkeler’ so he’s a bit confused,” the envoy narrates.

Sieber’s laid-back air sets him apart from many of the diplomats stationed in the Philippines. Try to imagine another envoy who says “Manila traffic” with a smile on his face.

Sieber, whose tour of duty began in late 2010, notes the horrendous traffic would be one of the things he would miss about Manila.

“I’m impressed with how people cope with it. It shows the resilience of the Filipinos who are able to deal with a difficult situation in a very understanding way,” he explains.

The ambassador adds that more than patience, the traffic honed his driving skills. “It also gives you a good excuse when you’re late for meetings,” he says with a chuckle. 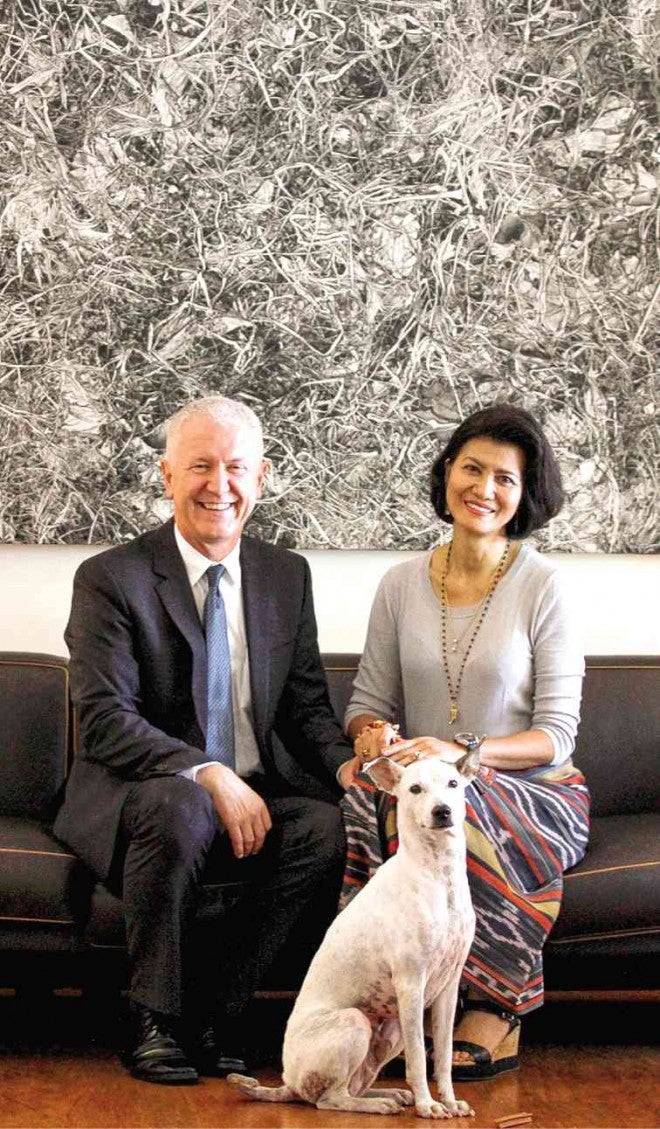 Family and friends know Sieber as a fast driver. Wife Gracita (née Tolentino), whom he met in New York in 1990 when she was still with the United Nations Development Programme (UNDP), once backed out of a memorable road trip up north “because she says I drive a bit too fast.”

Sieber does not mind spending days on the road. “It’s a great way to know a country.” His longest drive so far was carried out with a visiting sister—reaching as far as Dumaguete while making stops in Mindoro, Panay, Negros, Cebu, Leyte and Samar.

The trip that Gracita passed up had Sieber and friends motoring to Baler and Casiguran in the east, up the Sierra Madre, down to Banawe and up again to Tabuk where they took the Abra-Kalinga Road that brought them to historic Vigan.

A flat tire notwithstanding, Sieber says the drive was “spectacular! The mountains are so nice and all the way from Bontoc to Tabuk, there were extensive rice terraces all along the Chico River.”

Isn’t this quite ironic from a guy whose country is famous for its Alps?

“It’s a different environment. The Philippines is tropical, while the Alps are colder and barren in a way…”

Sources in the diplomatic community would always remember Sieber for his warmth and friendliness. The envoy said his marriage to Gracita gave him a headstart. Two years after their initial meeting in New York, the couple married in 1992.

Gracita recalls her then fiancé was already very interested in art. “He already had pieces with him when we met. And eventually we would buy one or two at every posting and bring everything with us all the time. Pieces of our furniture would end up in Bern but art pieces, we always took with us.”

One such painting is a black-and-white labor of love by a neighbor from New York simply remembered as Mary. The work has traveled from Stockholm to London and Bangkok. It enjoys pride of place in the Siebers’ living room.

The envoy’s wife stresses that for this reason, “Betsy and Martin are coming with us.”

“So is Benji,” she adds. “He’s an askal. I think he’s cute, but he has a habit of scratching his backside so that part is not pretty.”

“That dog will never win a beauty award,” Sieber butts in.

Sieber and family were not able to occupy the Swiss official residence immediately upon arrival due to renovations. 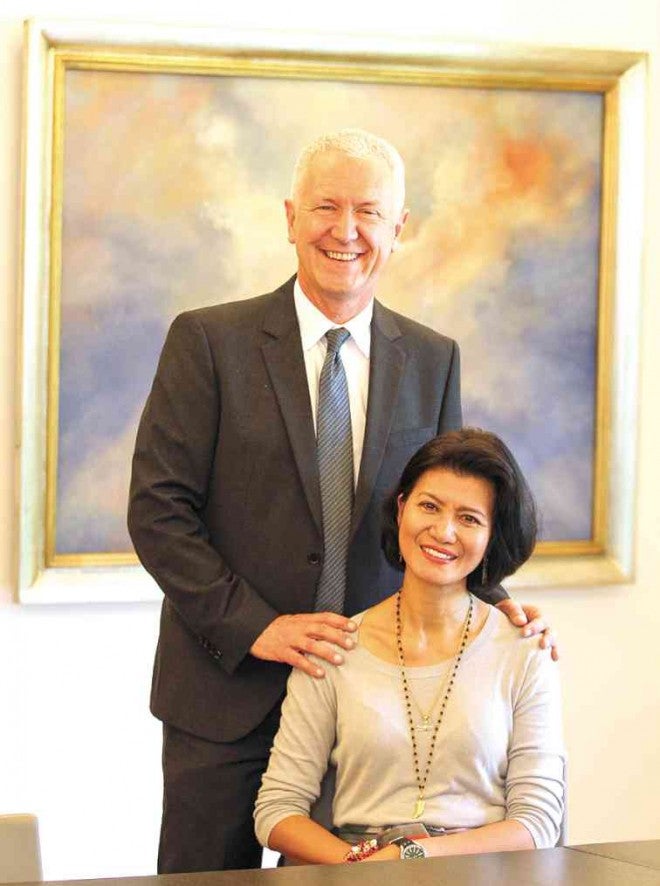 When improvements were finally finished, Sieber invited not just the construction and interior design teams but also Westendorp as the original owner of the property built in the 1950s. It was a decade later when the Swiss government secured the house for diplomatic purposes.

“Betsy was looking for a fountain when she visited. And she showed us pictures taken from the 1950s,” Sieber said.

And then, an uncanny twist—Westendorp showed pictures of the statue of an Indian goddess by the pond beside the den that faced the backyard.

The statue is no longer there, but Sieber clearly recalled seeing a painting of an Indian goddess surrounded by vegetation displayed in Malacañang when he first went on a courtesy call. The painting was by Westendorp.

“I was surprised when I realized that the garden and the pond in the painting are the ones here,” Sieber exclaims.

Sieber says art is one way of understanding a different culture. “To clearly project what Switzerland can offer, we have to understand how a country functions. Cultural sensitivity is a very strong method,” he explains.

Recently, the Swiss consulate and Swatch partnered for a National Day event called Create and Innovate, an art competition to emphasize Switzerland’s regard for art and creativity.

Swatch’s Virgie Ramos agreed to hold a notable reception at the Swatch Center to celebrate the event “to show what Switzerland is besides the cheese, chocolate and banking.”

Response to the event was huge. In a conversation with Sieber, Ramos mentioned that around 400 entries were submitted.

This same cultural sensitivity is necessary, he adds, in finding solutions to issues that concern both host and guest countries.

“Diplomats who don’t have it would be less effective. Whether you do a bilateral job like here in the Philippines and more importantly, if you do a multilateral job like in the United Nations, you negotiate and try to find solutions. So it’s even more important to develop a cultural understanding of the people, of where cultural delegations come from,” Sieber notes.

As it is, there are 6,000 to 7,000 Swiss nationals in the Philippines. Not all of them are properly documented.

“They like it here, they do business, retire, fall in love with a Filipino like I have. There’s research and a lot of investment. They live all over the Philippines. Other countries like China and Japan have people mostly living in business centers. Here, they are all over,” he notes.

Sieber adds that the Philippines has been on Switzerland’s radar even before China, Japan and other bigger trade partners.

“Three years ago, we celebrated the 150th anniversary of the opening of the consulate in 1862. That was just 14 years since the founding of Switzerland’s modern constitution. Already then, business relations and trading were important. Even the consulate in Australia was opened later,” the ambassador says.

Sieber mentions Zuellig, a pharmaceutical company; Holcim, a concrete materials supplier; and Nestlé as among the Swiss investors in the country.

At present, Sieber is involved in firming up a free trade agreement between the Philippines and the European Free Trade Association (EFTA) composed of Switzerland, Norway, Iceland and Liechtenstein—countries in Europe that are not members of the European Union.

Sieber says the EFTA regards the Philippines in particular, and Southeast Asia in general, as relevant economic players.

“There are economic difficulties in Europe and European businesses are looking for alternatives where they can find new markets. Asia has become one of the main focuses of Europe. With the healthy and positive developments the Philippines has undergone for the past five to eight years, businesses and governments are looking more at the Philippines,” he explains.

A free trade agreement would liberate both the Philippines and EFTA from stifling tariffs and obstructive legal issues.

“It also helps Filipino exporters get easier access to EFTA. Even though we’re not a member of the EU, we have an extensive network of agreements and business investments with the EU. Switzerland and Norway can also be interesting hubs for Filipino companies to expand their reach to the EU,” Sieber points out.

As he wraps things up in Manila, Sieber says his dossier on the Philippines would point out how great strides have been made under the Aquino administration especially in the peace process, education and the Reproductive Health law that he describes as “difficult issues to take up in the country’s context.”

“When I came in five years ago, I wasn’t sure that would happen. We had a happy time here with the warmth, traffic, geography, beauty, development and political progress that the President and the government have achieved.”