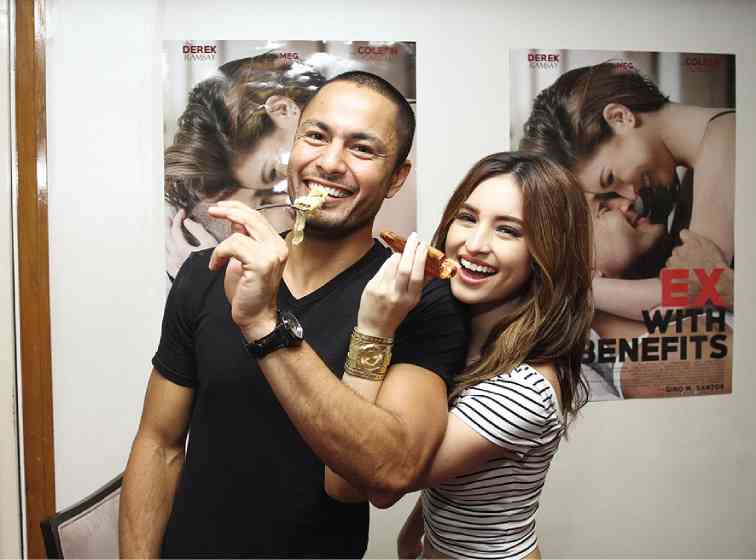 You have only a few hours left to catch the last performance of Audie Gemora and Michael de Mesa in “La Cage Aux Folles” at 4 p.m. today at Carlos P. Romulo Theater at RCBC.

Gemora’s performance is to die for, so to speak, and that of Michael de Mesa, too. Gemora’s Albin—the role popularized by Nathan Lane in the movie “The Birdcage”—was both comedic and poignant; his comic timing, with the gay mannerisms and affectations of his role, was just perfect.

To the night denizens, he was known as Zaza, the celebrated diva of the St. Tropez drag nightclub (La Cage aux Folles), and the lifetime partner of Georges, the master of ceremonies of La Cage.

Gemora’s Albin/ Zaza is so human —flawed one moment and heroic the next—that he can crack you up even as he induces you to tears.

The theater-goer familiar with what Gemora has done onstage and for Philippine theater in general will easily see how his Albin/Zaza proves the breadth and depth of his talent—sufficient to capture the nuances of a man/gay/woman character.

When I saw him emerge onstage as an impersonation of an “uncle” of Georges’ son Jean-Michel who was about to introduce the straitlaced parents of his fiance, I simply got over my day’s woes. His “uncle,” bemustached, with sideburns and pompadour, was a very hilarious parody of you-know-who (that, you must see for yourself).

Gemora is so in control of the exaggerations and subtleties of the role, and you enjoy his manipulation of it because it’s obvious he’s enjoying it, too. No wonder he was keen that I shouldn’t miss last Saturday’s show.

If there’s any doubt that De Mesa, the guy who grew up in show biz, has proved himself in theater, his Georges should dispel it. His Georges was a romantic, yet vulnerable, spouse to a capricious Albin.

We went away from the theater that night in awe as well of Steven Silva (as the Jean-Michael you’d love to coddle as a son), Noel Rayos (Jacob), Joni Galesta (a prodigy of my bosom friend Malen Claravall of Royal Academy of Dance), and of course, Sheila Francisco and Raul Montesa, and the rest of the chorus line.

Director Robbie Guevara made “La Cage” so fresh that today’s theater-goers can relate to it, no matter that you’ve seen it several times. Thank you, Santi Santamaria and 9Works Theatrical for never giving up on the fickle audience.

That’s the theater. Now go on to the cinema—literally, you can, after the afternoon theater matinee.

“Ex with Benefits” will be worth your evening. I liked it not because I watched it with Derek Ramsay beside me—alright, that’s part of the reason, that’s a major part of the reason—but because I didn’t expect to be pulling out tissue from my bag just in case the tears did fall—amid Tita Virgie Ramos’ Swatch’s A-listers.

“Nakakaiyak…,” I turned to Derek right after the closing credits.

You could feel awkward watching Derek as Adam onscreen, rip open the blouse of Coleen (as Arki) and let his mouth glide down her neck, down, down—and you glanced sidewards at Derek, the lifestylistas’ friend and favorite actor, and watched his deadpan expression. His eyes intently focused on the screen up front, he looked diligent and serious. He wore such a look of detachment, you’d think he was Nestor Torre the movie reviewer, not the celebrated hunk.

(The love/sex scenes were swift, a judicious play of drama and passion—tastefully done, in short.)

Derek and Coleen were sexy. I expected a rom-com, like “English Only, Please,” which became everyone’s favorite.

But “Ex…” isn’t a romcom. It’s a good solid story with good acting: Derek’s performance, this time, ran a gamut of emotions (unlike in “English”). His anger and pain could make you forget about his abs—his Adam is that good.

And Coleen, young as she is, can truly act. The camera loves her beautiful face that becomes clear and clean to paint her juvenile feelings. Even her dainty freckles, you almost suspected, were a tool to disarm the audience.

They were lovers in medical school whose relationship had no closure, until their paths crossed again. By then he was already a celebrated sports doctor and she, the A-student in med school, was just a medical representative.

You would love the twist toward the end. It drew empathy and a fervent understanding of their characters—to us, honest characterization helps make a movie credible.

This jolt at the end was what left many in the audience teary-eyed.

As the lights went on, we espied the tears rolling down one eye of Virgie Ramos, her left eye.

The woman behind Swatch has made it her habit, it seems, to run private screenings of the movies of her favorite Swatch endorsers, especially Derek.

She has made it another habit of sitting us beside Derek in those screenings, bags of popcorn on our laps.

Adam and Arki were making love and the camera swept up and down Adam’s arms and biceps, revealing the tattoo written on his shoulderline. I couldn’t help it. I turned to Derek, “What does your tattoo say?”

“Isippusokaluluwa,” he whispered back. (That tattoo is for real.)

In another scene, Adam and Arki were cuddling in the tub, playing with the bubbles and suds on their bodies.

Then Derek blurted out, staring at that Adam on the screen: “The tub is too small for me.

“Look at those legs.”

Yeah, I saw what he meant: his knees had to be bent. It made us grin—at a supposedly romantic scene.

Our seat of privilege, it turned out, has its upside—and downside. But I’m not complaining.