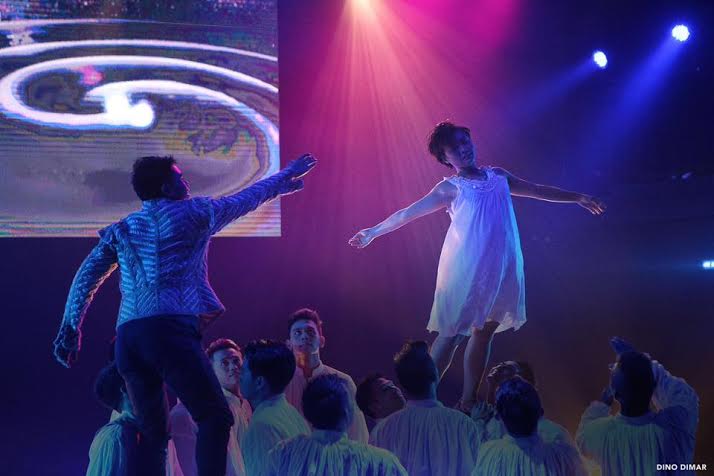 Roco Sanchez as R Montes and Francesca Go as J Capule in Dulaang UP’s “multimedia hallucination” take on “Romeo and Juliet,” directed by Dexter Santos. The show has remaining performances today and tomorrow at Guerrero Theater, UP Diliman. PHOTO BY DINO DIMAR

For its maiden offering this season, its first under newly installed artistic director Dexter Santos, Dulaang UP promised a “multimedia hallucination” based on Shakespeare’s tragedy of star-crossed lovers, “Romeo and Juliet.”

The show’s title, “#R</3J”— pronounced “hashtag R heartbroken J,” leaves older folks like me nonplussed—makes it clear that the company aims its adaptation of this story of doomed young love squarely at millennials.

Hallucination may be too strong a word, but this interpretation has a brave wildness to it. Its audacious beginning has a creepy Shakespeare (Leo Rialp) projected on a video screen speaking the prologue, the colors lurid, the words “star-crossed lovers take their life” stuck in a loop. The Bard’s Verona becomes “Verona, Global City.” Mercutio’s speech about Queen Mab turns into a drugged-out haze (in which a woozy Shakespeare returns on the screen, as addled as the characters).

The Capulet masked ball is a rave party, the stage flooding with young bodies that jump and stomp and gyrate to the thumping music for all they’re worth. It’s a full-blooded production from the get-go.

And yet, this “Romeo and Juliet” remains a tragedy of inherited loyalties. Its teenaged protagonists, simply named R and J, are scions of rival political clans (Montes and Capule), both alike in dignity, whose clashes have left blood on the streets. While Montes is simple and austere in his short-sleeved barong, Capule is a dandyish TV actor-turned-senator with tinted hair and who likes to wear pink and purple.

The key twist in this story, one with plenty of them, is that the pair aren’t Shakespeare’s innocents. If the Bard has his youngsters professing their love in verse that elevates their love to the level of the cosmic, beyond the smirching of this world’s foul congregation of vapors, scriptwriter Guelan Varela Luarca plops them waist-deep in the muck.

Already they are jaded souls, experienced in the ways of the world, and their yearning for love is a desire for something authentic and pure, something they don’t know where to find. R is first shown in his bedroom whacking off to a sex video of his ex-girlfriend Rosaline, then Ben (Benvolio) stumbles upon him and sings a bawdy ditty on the joys of self-stimulation.

J, all of 16 years old, short as a child, her sweet face topped with a pixie cut, returns to the country after years in America, and now she’s a pop star of limited talent. She makes her debut to a made-for-noontime-TV medley of trashy pop hits, with backup dancers peeling layers of costume off her, carrying her about the stage and pinning feathered wings on her back and lifting her above the crowd, all as she happily warbles off-key.

In the middle of a talk show, she professes undying love and loyalty to her father who is accused of serious crimes, and in mid-sentence she steps off to the side, her video image above still mouthing the hollow words, the real her smoking, smirking. Her father is a fake, she says, and so is she.

R stands as an embodiment of courage, daring to aspire to real feeling despite the roiling sea of stimulation that threatens to drown them. His love cuts through J’s veneer, the pop-star persona punctured to reveal a tenderness she might not know she still had.

When they’re together on stage, the superficial gives way to the genuine, and love blooms. But instead of exchanging love poetry in the balcony scene, the two turn balletic, mimicking gestures of flight and release. (For good measure, the clicking of a mouse accompanies their pas de deux.)

Separating real from fake, superficial from substantial, is not as easy as it looks, and showing how thin the line is between them is perhaps this production’s most insightful turn. This adaptation offers up plenty of what Luarca, in his program notes, calls “cheap simulacra” and “meaningless spectacles”: pop songs, video games, TV shows, news footage of violence, social media posts, YouTube videos, the emanations and exhalations of a culture’s inanity, the stimulation that leaves us so unsatisfied.

Yet often they cut both ways.

For instance, a love montage shows R and J spending time together away from the prying eyes of cameras and chaperones. It’s cutesy, a formula already familiar through countless romcoms, yet it crackles with life. A drippy song about dancing and lips colliding plays. How to separate the dancer from the dance, the cheesy love song from the love?

At the funeral of Tibaldo (Tybalt), J weepily reads the lyrics of her slain cousin’s favorite song, and the audience titters: it’s “Wind Beneath My Wings.” What better symbol for disposability than the pop song, unabashed peddler of false sentiment? Yet the moment remains solemn, because we know what it’s like for such songs to speak to us, to speak for us. (This is the reason “Glee” was such compelling viewing, at least for a season and a half.)

There’s social media, that nexus of self-expression and ephemerality. R turns to Facebook to articulate his anguish over the turmoil in the world, his heartfelt concern caught in the circus of self-presentation where real feeling and pretense are dressed in the same bright pixels. R and J fail to keep their relationship secret (another surprise; no Friar Lawrence here), and soon everyone and his barkada has an opinion. As R peruses Twitter after the death of Tibaldo, he wades through post after enraged post, the netizens’ outrage easy and impotent.

There’s video: A suicide caught on camera tells the truth, that it was not a calm, placid death, the body stretching quietly onto a bed, but an awful, wretched one. At another talk show, J answers a pointed question that hits her in the gut, and on the screen we see her turn to the camera, pained, on the verge of tears. On stage, her flesh-and-blood self lies confidently to the host and audience.

Then there’s the language Luarca gives the lovers to speak. In a play awash in a variety of registers (not just of language but of music and dance), the two speak in teledramatic English.

She warns him, “If you love me, I will hurt you.” After she falls for him anyway, she says, “I need to learn how to unlove you.”

It’s schmaltzy but true to these kids, and that last bit uses a neologism fit for a time that has given us “unfriend.”

Luarca, longtime translator of Tanghalang Ateneo, writes that the attempt to bring the centuries-old story into the present is “sacrilegious,” that “something crucial in our present zeitgeist will have to disembowel Shakespeare’s play.”

Truth, perhaps, or merely coyness, since Luarca also worked on the script that became Tanghalang Ateneo’s “Sintang Dalisay,” a vibrant reworking of the same play. If to adapt is to disembowel, Luarca has shown that only by such seeming violence can a classic come alive in the present.

Dexter Santos, the youngest artistic director in the company’s 40-year history, takes the reins himself, and he proves apt. From the propulsive war scenes in “Orosman at Zafira,” his memorable debut, to the gold-tinged flashbacks in “Collection,” to the frenzied bloodbath that ends “Ang Nawalang Kapatid,” Santos’ calling card has been a kinetic vitality, for better or worse, since sometimes he mistakes movement for dramatic action.

Here he keeps the action moving nimbly and trippingly and keeps the ensemble of mostly student actors in perfect tune with each other.

True, there are a few things I’d rather do without. The opening dance montage, first stately, the performers in vaguely Elizabethan dress, then modern, in contemporary casual, feels like self-conscious belaboring of what is already clear. So, too, is the muted ending, in which the performers forgo a curtain call in favor of leaving the audience pondering their own image blown up on the back screen, a giant winking selfie. But these are easily forgiven.

Though it doesn’t quite deliver the “multimedia hallucination” its marketing campaign promises, it gives us something better: a vivid reimagining of “Romeo and Juliet” that, though dispensing with his verse, is true to Shakespeare and, though cleaving to a well-worn story, is true to the times as well.