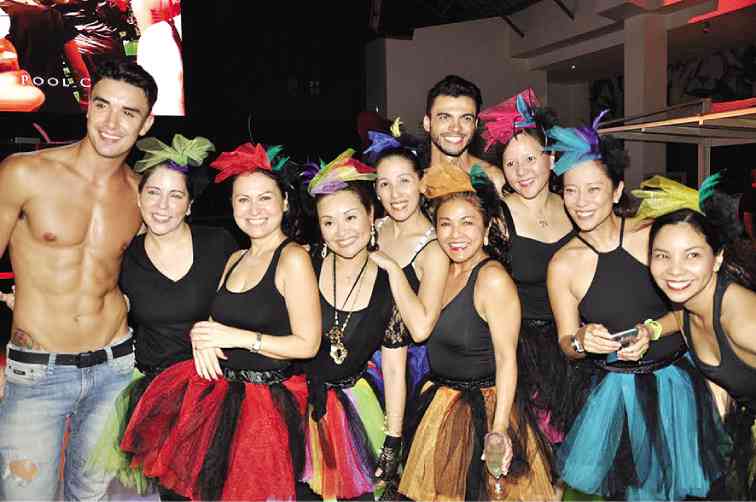 It’s time to move it, move it

Either in defiance or in denial of my age, I continue to celebrate life full of energy and passion. And what better way is there to defy and deny than to have a Zumba party?

In just a couple of days, my best friend Tim Yap and I had planned #TezzaZingAlongZumba at The Palace Pool Club in BGC, which had super delicious food for all the guests, along with Goldilocks cakes and Cupcakes by Sonja for those looking for munchies.

I arrived in a chauffeured, champagne-colored, convertible Volvo C70.

Event director Javi Martinez met me along with two, hot Brazilian underwear models, Daniel and Eduardo. Both hunks were clad in skimpy red Speedos and six-packs so ripped that pan de sal would be an appropriate description.

The high-energy Zumba dancing of top certified Zumba teachers Madelle Paltu-ob and Robert Nee had everyone on the dance floor, including my dad Alex Prieto. After leading the guests in a Zumba workout, we had a dance-off with three groups contesting for the best Zumba dance.

The ZBabes of Manila Polo Club, led by Katty Qua, got a special gift from Fila for winning the #TezzaZingAlongZumba Contest, rocking to a Madonna song.

The Assumption ladies got an extra treat, thanks to Fila Philippines’ Cris Albert, who provided bubbly to the max in the Fila Cabana. Fila was so generous, giving away a pair of shoes to each guest.

Flowing Yellow Tail wines, both sparkling Bubbles and sweet Moscato, cooled off the guests from the afternoon heat. Yellow Tail is exclusively imported and distributed by Golden Wines, and is found in all major supermarkets nationwide.

A three-layer cake by Penk Ching delighted everyone. It’s worth noting that many of my friends who supported this Zumba party are again supporting another of my projects, the Red Charity Gala on Oct. 16 at the Makati Shangri-La, which I co-chair with super talented Kaye Tiñga.

Among these loyal supporters are Penk, Adworks couple Mye and Norman Cruz, who create the amazing invitations for these events, Volvo Philippines president Albert Arcilla, and, of course, Bench, Watsons, ZenZest, SM Bags and Shoes, Made in Candy and Villa Del Conte chocolates.

Thanks to infinite prayers and offerings to Sta. Clara that events lady Bangs Zaldivar arranges for me for all my outdoor parties, the weather held up until the party was nearly over and everyone was already wet with foam. At that point the downpour was a perfect cue for the guests to jump into the pool, joining the Philippine Mermaids, who added color and zest to the Zumba party.

On the same afternoon, Azia Ablaza-Syquia celebrated her 7th birthday at the Manila Polo Club with a Japanese-themed party. Friends and family came garbed in traditional and not-so-traditional Japanese attire, flowing into a world of cherry blossoms and red lanterns, all made possible by the creativity of her uncle, Junjun Ablaza.

The guests were led by grandparents Letty Syquia and Louie and Mellie Ablaza. It’s great to see young kids starting out with themed parties, which really add fun to an event.

Let me end with a host of September announcements. First, try to drop by The Gourmand Market at C1 Park, Bonifacio High Street Central, which is open until 11 p.m. today. Among the traditional faves are NawwTy’s Kitchen by Trish Panlilio and Dara Roa, known as the Collab Contessa.

New entrants include Ricing Bowl, the new entrepreneurial venture of my son Bryan Prieto, a DIY rice bowl eatery. On that note, I’d like to wish Bryan an advanced happy 30th birthday tomorrow.

Next, on Sept. 16, Crate & Barrel is having a special sale at its new home and décor store at the SM Annex Building in Makati. Shop for a Cause at Crate & Barrel will be offering 20-percent off on all store items, in cooperation with Assumption College Batch ’80.

Thirdly, on Sept. 26, join the Global Mala Project Manila at White Space Makati. Global Mala is an annual event organized by Teresa Herrera-Anthony to promote peace and positive change through yoga. There will be lots of different styles of yoga to choose from during the day, starting at 8 a.m. A kirtan concert in the evening caps the event.

Good friend Rosan Cruz will be teaching a Kundalini Yoga session at 1 p.m. Rosan found solace healing in yoga, leading her to now pursue yoga professionally as a means to heal others. She teaches Kundalini regularly and loves how the ancient technology of the practice goes beyond the physicality of the poses and awakens the practitioner spiritually.

Her experience of healing through yoga was transformative in a holistic sense, and this is what her students will experience in her classes.

As a final announcement, I invite all to participate in Francisfest, our parish’s annual festival in honor of St. Francis of Assisi, the founder of the Franciscans.

This year’s highlight is a concert by internationally renowned pianist Cecile Licad on Oct. 2 at 7 p.m. at  Santuario de San Antonio, accompanied by  ABS-CBN Philharmonic Orchestra conducted by Gerard Salonga. Tickets are available at the parish office, or from the committee members of Francisfest 2015, led by chairperson Amelita Guevara.

This year is the 19th Francisfest and also the 40th anniversary of the San Antonio parish. Proceeds of Francisfest support outreach programs, such as the Scholarship Program for deserving youth, the PGH Pediatric Hospital Ministry, the Prison Ministry, victims of Supertyphoon “Yolanda” in Samar, and poor Franciscan parishes in rural areas.