Tony Mabesa: ‘First of all, you have to be healthy to be in theater’ | Inquirer Lifestyle ❮ ❯ 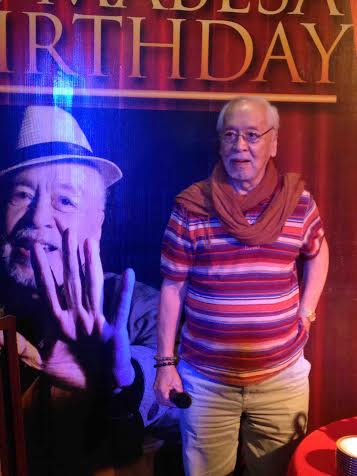 Tony Mabesa at the surprise 80th birthday celebration thrown for him by friends and colleagues in February this year. PHOTO BY ALYA HONASAN

Tony Mabesa: ‘First of all, you have to be healthy to be in theater’

Antonio “Tony” O. Mabesa is this year’s Gawad CCP Para sa Sining awardee for Theater. In a career that has spanned over six decades, he has directed and acted in over 200 productions. He also trained and mentored scores of students who have become leading contemporary practitioners in theater, film and television.

Mabesa completed an undergraduate degree in agriculture but decided to choose a life in the theater. After taking up graduate studies in community development in the US, he got his Master’s degree in Theater Arts from the University of California in Los Angeles and did further studies in dramatic literature at the University of Minnesota. He was able to work as a stage manager to Sir Tyrone Guthrie and observed up close how a campus-based theater organization should be run and could work.

When he came back to the Philippines in 1976, Mabesa initiated the formation of Dulaang Unibersidad ng Pilipinas, or Dulaang UP. At a time when the only regularly producing company at the UP campus was the traveling UP Mobile Theater headed by Wilfrido Ma. Guerrero, Dulaang UP became the venue for original Filipino plays and masterpieces from world literature.

Mabesa also pushed for the establishment of a Baccalaureate program devoted to Theater Arts, which began in 1978, and a Master of Arts in Theater Arts Program at the UP Diliman Campus. He also started the UP Playwrights’ Theater in 1980, a parallel season to Dulaang UP that focused on new works by Filipino playwrights.

In 1978, he was named Theater Director of the refurbished Manila Metropolitan Theater.

Even after turning over the position of artistic director in Dulaang UP and after his official retirement from the university, Mabesa has continued to direct plays as well as act in theater, film and television. In recent years, he has also directed productions and served as artistic director for the theater company in Angeles University Foundation in Pampanga.

But Mabesa will arguably be best remembered for the students that he has mentored from their beginnings in Dulaang UP and the UP theater program. Through them, Mabesa’s work and worth will last for more than just a lifetime.

In this interview, he talks about his work as a theater director.

What led you to the theater and to directing?

My high school teacher wanted to spend more time with her boyfriend. We were doing “The Farce of Master of Pierre Patelin” and she asked me to take over. I guess I enjoyed it and I saw that I could be good at it.

I was in UP Los Baños. My friends and I would come together and every summer we would do a show and we would invite people to watch. And then ganoon na (that’s it).

What influences you in the choice of material to direct?

It was different in different stages of my life. In the beginning, maybe you saw a production in Manila or you chanced upon a script at the US Information Service and then we would do it Los Baños. The focus in Dulaang UP, being a theater group based in the academe, was the classics. When I was in the Metropolitan Theater, it was more Filipino material. We did, in both cases.

I’m very happy that Dulaang UP is quite unique in that we’re the only one that has done a Sanskrit play and a Kabuki. We’ve covered the major periods in dramatic literature. While we were also doing Filipino plays, we felt that there should be a subsidiary group to focus on original plays or revivals of classic Filipino plays. That’s what became the UP  Playwright’s Theater.

What process do you usually follow in your productions?

I study the script very well, think of people who can do the parts, then put everything together.

Do you work with certain people more often than others?

What part of the work gives you most satisfaction?

I guess when I see great performances of the actors I’m excited about. When a new play comes to life, let’s say the first production of a Filipino play, that’s a really high moment.  And also when I see successful people who I have worked with or helped nurture in the past, that gets me. My thinking now is more reflective more than anything else in this stage of my career.

What are your thoughts about theater in the Philippines today?

I wish more people will be doing the classics again. English-language theater tends to do the musicals that are successful on Broadway and the West End. There’s quite a lot of that. But they’ve almost turned their backs on the great works. The Filipino playwrights’ works, I think, can be produced also.

What is your advice for those who want to enter the theater?

First of all, you have to be healthy to be in it. Second, you have to have a certain madness, madness in terms of love for what you do. The word passion is overused. But you have to almost live it—think and love the theater.

I’ve always believed that while the “school of hard knocks” is very good, I think some academic experience in theater is always a plus factor, so they better study. Instead of going straight to becoming a TV star or a movie star, maybe they should be going to the academe to study the art, which involves acting, directing, and all the aspects. I think this goes for directors, too. It is important to get the opportunity to study, study.

What can you say about the following who were also founding artistic directors of their respective companies?

ZENEIDA “BIBOT” AMADOR, Repertory Philippines: Bibot tried to give me a role for Repertory Philippines. But I never got to act for them. But I acted with her in Fidel Sicam’s PITONG TAON for the celebration of the 25th year of the Palanca Awards. She was always quite a gal. I always noticed that her productions were always fast-paced. She was really well studied as an actress. And to carry on with a company like Repertory Philippines was just awesome.

AMELIA LAPENA BONIFACIO, Teatrong Mulat ng Pilipinas: She was among those who inspired our generation. I saw the plays that she wrote, designed and directed. Her plays are totally worked out that you don’t have to change anything.

BEHN CERVANTES, UP Repertory Company: Behn was a fine actor. Behn, of course, did a lot of street theater, a lot of socially politically relevant plays.  His first production of “Pagsambang Bayan” I really liked.  There was a certain energy in the way he  directed.

TONY ESPEJO, Gantimpala Theater Foundation: I did not get to work much with Tony Espejo. I acted for him only in a production of “Mirandolina” for Dulaang Kabataang Barangay.

ROLANDO TINIO, Teatro Pilipino: I loved Rolando. I was in the first season of Teatro Pilipino. Rolando was so knowledgeable. It was always so nice to talk to him, especially when I just got back from studies abroad and there were very few I could talk to. Rolando, of course, had a wide range. Where would you find a director directing while he was sewing your costume? He always wanted you to look good in the costume. And I found him to be very methodical. Rolando was one of the few directors I could really act for. And later, of course, he acted for me. He’s really wonderful, I really miss him. And what a mind! What a grasp of the Filipino language! Whatever I learned in Filipino, in Tagalog, I learned from Rolando.