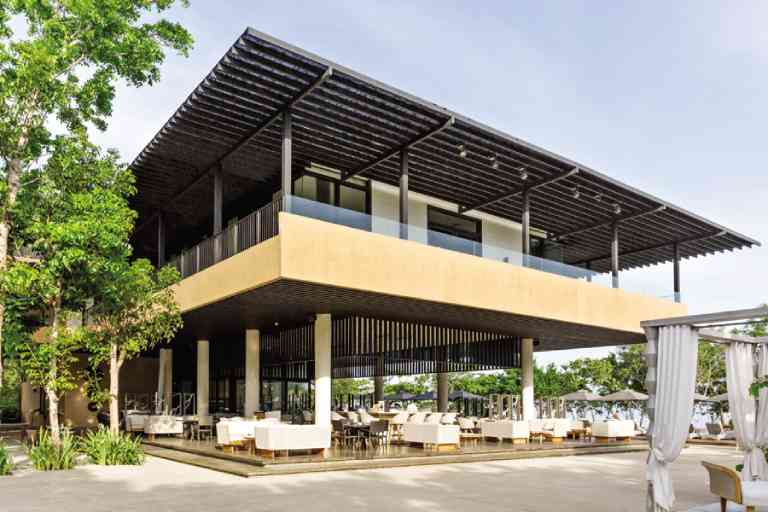 When ‘turon’ has your favorite Bohol peanut kisses

A 30-year-old chef who has worked in Manila would be bored out of his mind working on a quiet, laid-back island, right?

In his five years at Amorita, Chef Paeng has scoured every market on the island, attended every fiesta, and found small sources for his raw ingredients (including a supplier of tablea, the delicious local chocolate), and come up with a menu that brings Boholano heritage cuisine to a whole new level.

“It’s local ingredients, local recipes, but with European preparation—that is, we do it well. Pinaghirapan,” he enthuses.

It’s hard to argue when you’re biting into Amorita’s signature turon at its Saffron Restaurant. It’s stuffed with banana, smothered in tablea chocolate, and sprinkled with peanut kisses, that favorite Bohol pasalubong, crushed into a sinful powder.

And no, Chef Paeng, who specializes in French cuisine, isn’t talking about “trying hard” attempts at fusion, but hearty dishes that taste as good as they look.

It helps that the self-confessed Manila-raised “mama’s boy” had known he wanted to cook since he was 10 years old, watching as his mother prepared such family favorites as lumpiang shanghai made with garlic leaves and kinchay, or kaldereta that used beer as meat tenderizer.

The family ran a shoe business, but Chef Paeng never even considered any other course, enrolling in a Diploma in Culinary Arts course at the International School for Culinary Arts and Hotel Management (ISCAHM) and being mentored by the likes of Chef Humphrey Navarro right after high school.

From there, Chef Paeng became an “opener”—that is, part of the opening team behind Navarro’s fine dining spot, Parallel 45, in Mandaluyong, and working in the trenches for the opening of Wynn Hotel in Macau.

Back in Manila, he helped launch Bubble Tea, Aubergine (under his old ISCAHM mentors) and Celsius Gastro-Lounge before being introduced to the people behind Amorita.

Chef Paeng spent six to eight months doing research and preparing the Amorita menu. Almost all the ingredients are locally grown; he’s even planning to put up a vegetable garden on the tropical resort’s grounds so people can pick their own salad one day, he says.

And what has he learned about Boholano cuisine?

“They use a lot of coconut, it’s very aromatic, and they like their spices, especially ginger,” he says.

For his ginataang hipon, for example, he makes it a point to extract the flavorful juice from the shrimp heads to create a thick, more indulgent sauce that works wonderfully well with rice.

His ceviche is a kilawin with coconut milk and a riot of spices. And his version of a favorite local fish stew, sinanglay, uses flavorful local white snapper, jazzed up with bagoong, coconut milk and leeks.

To keep himself from ballooning from all the feasting, Chef Paeng plays badminton with the staff, works out, and has tried scuba-diving in Bohol’s waters. He’s prepared feasts for 240 guests at Amorita, but when he’s not pressured, nothing beats an old Filipino favorite for his comfort food: monggo.