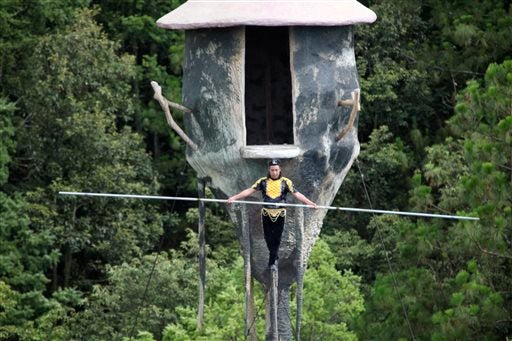 In this June 26, 2015 photo, Askar Obulqasim performs walking on a tightrope during a show at a theme park outside Kunming in southwest China's Yunnan province. Already the holder of several tightrope world records, including the fastest walk across a 100-meter (330-foot) rope in 2013, Askar hopes to draw international attention to the profession known among fellow ethnic Muslim Uighurs as dawaz. AP

WULONG KARST NATIONAL PARK, China — Askar Obulqasim scans a valley between limestone cliffs reminiscent of a classic Chinese painting as he plots out the terrain for his next big feat.

He plans to string a 1,000-meter rope (3,300-foot rope) some 300 meters (1,000 feet) above the ground in the Wulong Karst National Park in central China, then walk to the middle of it and sit down for an hour with a bottle balanced on his head.

Already the holder of several tightrope world records, including the fastest walk across a 100-meter (330-foot) rope in 2013, Askar hopes to draw international attention to the profession known among fellow ethnic Muslim Uighurs as dawaz.

Many Uighurs consider the more than a millennium-old tradition of dawaz one of the noblest exports of their home region of Xinjiang, and pride themselves on doing their feats without safety nets. Fellow Uighur Adili Wuxor gained fame after spending 60 days walking on a tightrope in Beijing’s Bird’s Nest Stadium in 2010.

Askar, 42, said the profession is less about athleticism than it is about resilience.

Resilience is a common theme among Uighurs (pronounced WEE-gurs), who often feel left out of the government-driven economic development in their home region; critics have said the growth benefits incoming Han Chinese more than native Uighurs.

This discontent has driven many to try to leave China through Southeast Asia en route to Turkey, to which Uighurs have linguistic and cultural ties. It also has fueled unrest that has erupted in terrorist attacks, including a March 2014 knife attack by eight assailants that killed 29 people at the railway station in Kunming, far from Xinjiang in southern China.

Some of that unrest may have spilled over into Thailand, where authorities suspect a recent deadly bombing involved people linked to the illegal trafficking of Uighurs through Thailand.

Askar, who lives and works near Kunming, said he deeply resents militants who have launched attacks for marring the reputation of Uighurs. He said that after the railway attack, he dared not say he is from Xinjiang, preferring to pretend instead that he is from Turkey.

“I was very afraid,” he said during a recent two-day tour with a journalist of the Wulong park, near Chongqing, and the theme park in Kunming where he normally works. “Why? Because a small group of bad people influenced the way all the Uighurs are perceived.”

Rope walking has a long tradition among Uighurs and originally was tied to religion, said Uighur language professor and researcher Gulnisa Nazarova of Indiana University.

“Climbing on top of the rope was regarded as a way of ascending into the abode of God,” Nazarova said. “Those who ascended the rope enjoyed a special status among the common folk and were particularly revered as holy men.”

It also ties into the Uighur sense of heroism and adventure, Nazarova said. “To the Uighur mind, dawaz tightrope walkers are emblematic of the Uighurs’ inherent adventurousness and, perhaps, foolhardiness. They believe that this temperament is in their genes.”

It’s isn’t clear how many dawaz practitioners there are, although prominent tightrope walkers can be found in many cities across Xinjiang. The most famous Uighur tightrope walker is probably Adil Hoshur, who appeared in the film “Kings of the Sky.”

Nowadays, when Askar is not looking for his next challenge, he can be found performing twice daily at Dwarf Empire, a theme park featuring dwarfs. He and a fellow Uighur who goes by the single name of Anwar, 23, have a well-rehearsed performance involving stunts like lying down or running on the rope.

The Wulong park walk is likely to happen within a few months, but no exact date has been set.

After years of performing professionally, Askar said he is not afraid anymore, no matter how high the rope is.

But he still has his pre-performance routine.

Seconds before stepping on the rope, he checks messages on his cellphone, his long dreadlocks hanging around his face. Then, he utters a short prayer to Allah, grabs a long metal pole and starts walking.

About 10 minutes later, as he steps off the rope and puts back the metal beam that helped him maintain balance, Askar is sweaty and out of breath, but a radiant smile shines on his face. TVJ