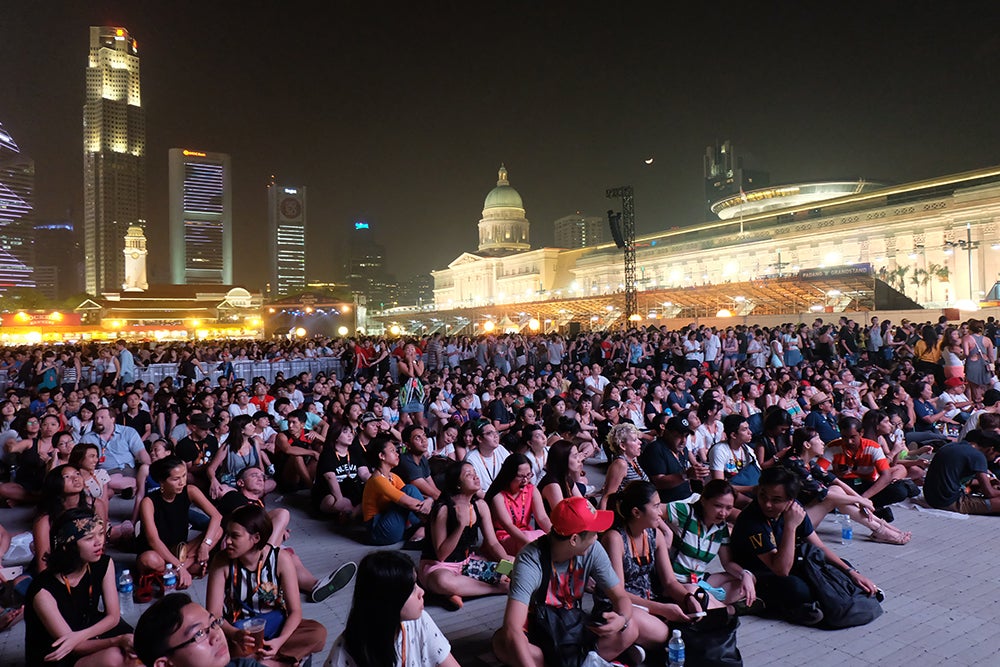 FANS wait for Maroon 5 to perform

A grand time at the Singapore Grand Prix

“Come on, Kimi, keep the pace! I need everything you’ve got! Everything!” a fan sitting behind us on the Padang Grandstand cheered Ferrari’s Kimi Raikkonen on.

Formula One cars whizzed past, Ferrari-Red Bull-Ferrari, sparks flying, too fast to be captured by our lenses.

It doesn’t matter if you’re not really into the sport, if you’re in Singapore during Grand Prix Season, it’s inevitable: you will catch F1 fever.

Now on its eighth year, Singapore Grand Prix still remains the only night race on a street circuit in the 13th leg of the 2015 FIA Formula One World Championship calendar.

And it really lived up to its theme “One Stop Non-Stop.”

At the 2015 Formula 1 Singapore Airlines Singapore Grand Prix, the action really doesn’t end—inside and outside the Marina Bay Street Circuit. There is plenty of fun for everyone—F1-obsessed or not.

Each night, regardless of which team or racers they’re rooting for, fans come together for incredible entertainment and memorable nights out.

We kicked off our adrenaline-charged weekend by watching the racers practice from the comfort of the Singapore Suite, drinking W Hotel’s Singapore Slingshot, a cool twist on the classic cocktail—a killer mix of gin, Benedictine, bitters, pineapple and a cherry popsicle served in iconic Tiger beer cans.

When practice was over, Pharrell Williams hit the Padang Stage wearing a giraffe shirt.

“Singapore, who came here to party?” Pharrell asked as the crowd cheered. Then he performed a song that was perfect for the sweltering evening—Nelly’s “Hot in Here.”

The crowd buzzed in electric anticipation of his hit “Happy.”

Later that night, a big treat for “Game of Thrones” fans: DJ Kristian Nairn, who plays Hodor in the show, spinning at The Podium Lounge at the Ritz-Carlton Millenia.

F1 was everywhere. In the lobby of The Fullerton Hotel, a race car covered with orchids and two adorable bear drivers greeted guests. Singapore Pinacotheque de Paris at Fort Canning Arts Centre had a special exhibition of vintage cars, specially brought in for Grand Prix weekend, on top of its already impressive collection of art. (Claude Monet, Rembrandt and Picasso in one room!) Aston Martin supercars were on display at the Wisma Atria. There were Formula One-themed games, pub crawls, poolside soirees, pop-up shops and restaurant menus (because people need fuel, too). At the Singapore Suite, even the napkins had F1 cars on them.

The next night, after the racers burned fuel in the Qualifying Race, Maroon 5 took over Padang Stage, playing their hits as the enormous crowd sang along.

“It’s like 17 million people out there. It’s never-ending,” frontman Adam Levine said, who started shedding his clothes throughout the show. “Beautiful place. It’s hot as sh*t too, isn’t it?”

On the way out of the concert grounds, people raved about the show. “That was so good,” we heard these words over and over again, repeated in different accents.

At the exclusive Amber Lounge party, champagne flowed freely as Apl.De.Ap performed for revellers that included models, TV personalities, racers and beauty queens. The after-party at Ce La Vi gave a fantastic view of the circuit from the top of Marina Bay Sands.

On Sunday night, the highlight of the weekend: the race. We decided to live dangerously and chuck our earplugs for the full experience. We grabbed our seats at the Padang Grandstand, keeping our eyes on the big screen in front of us and the live leaderboards on our phones, cheering and hollering as the racers roared past us.

We gasped as Sahara Force India’s Nico Hulkenberg’s collided with Williams’ Felipe Massa and again when news spread about a man who had wandered onto the track.

“What a fantastic, enthralling race,” the announcer said. Yes, it was.

After the race, as he rocked the Padang Stage, Jon Bon Jovi said, “I want one of those cars to drive around in Jersey. Maybe Ferrari will give me one.”

It was a hell of a weekend, too.