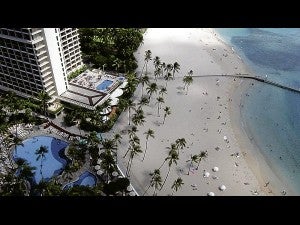 While the Philippines is made up of some 7,200 islands, this pocket of nirvana is a cluster of eight jewels located in the vast waters of the Pacific Ocean. This is Hawaii, the 50th state of America that is synonymous with sun, surf, beach, and washboard abs. And you can enjoy a piece of that action for as low as $590++ per person.

Called the Swingaround Tours Honolulu, its packages include the five-star accommodation of Hilton Hawaiian Village, located in the popular 1.2-km strip of the Waikiki beach ($795 for twin room). The famous white-sand strip of O’ahu, in fact, starts at the Hilton and finishes just a little beyond its property.

The Hilton, with seven towers, is a sprawling community of carefree vacationers with themed restaurants, bars, and shopping areas for groceries, souvenirs, trinkets, and more. It also has a surfing lagoon and is home to some penguins, flamingos, and other birds.

Most surfers prefer the Waikiki strip, since the waves only go up to just more than 10 ft. Waves on the other side of the island, the North Shore—notorious for having claimed the lives of many adventurous surfers—surge up to more than 20 feet. Hilton is also the place for the authentic Blue Hawaii, a cocktail of vodka, blue Curacao, soda, and sweet and sour especially mixed by a bartender for its special guest in 1957, the King of Rock Elvis Presley.

“It used to be that Filipinos stayed at the homes of their relatives and friends while on vacation,” said Waikiki Resort director for sales Loren Shim. “An even better deal for vacationing Filipino families, children under 17 years old stay for free at Waikiki Resort. Today, however, we are slowly seeing a change in that behavior, as we see them more and more checking into hotels.”

Part of the package is the Pearl Harbor tour. Bombed by the Japanese on Dec. 7, 1941, a memorial now stands listing over 1,400 American soldiers who perished during the attack. 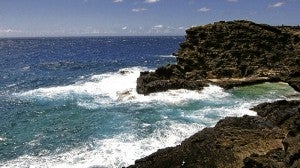 A must-do at the Pearl Harbor is a ferry ride visit to the sunken battleship, the USS Arizona. Ferries to this memorial have a glass platform where visitors can view the remains of the battleship. A graveyard under the sea, the USS Arizona now rests peacefully along with its fallen soldiers on the seabed.

“The Hawaiian government originally wanted to raise the USS Arizona . But when even more people died trying to bring the ship back to dry land, they decided to leave it in peace,” said Kelly Lai, Hawaiian Tours Taiwan liaison.

A city tour of downtown Honolulu will set the theme music of “Hawaii Five-O “on a loop in your head as you will feast your eyes on places made famous by the TV show. Among them is the gold-leaf statue of King Kamehameha.

Across the street is a National Historic Landmark, the Iolani Palace, restored to its former glory. The official residence of the Hawaiian monarchy and built in 1882, its presence makes Hawaii the only state in the US with a royal palace.

And perhaps, too, the only lackluster Chinatown in the world can be seen in Honolulu—a row of Chinese restaurants bearing the names Jade, Golden, Seasons, Harvest, Crystal or combinations of them line a sidewalk frequented mostly by wandering pigeons. 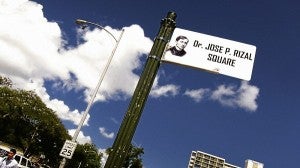 Save for the shrine of Sun Yat Sen, an early Chinese settler, and a handful of elderly Chinese men passing the day with a game of chess in a public park, Chinatown Honolulu edition certainly lacks the life and color of Chinatowns we’ve seen. Perhaps we visited on the wrong day?

A night of music and dance can also be yours if you take the optional Ali’I Kai dinner cruise. Party the night away aboard the world’s largest Polynesian catamaran, where you will be treated to a traditional Polynesian dance show. There’s also a buffet spread designed to serve an entire village of ravenous tourists.

The star of the cruise, however, is the stunning sunset and its breath-taking reflection of the O’ahu cityscape by the shoreline—an assemblage of hotels, resorts, residences, and buildings all the way to the extinct volcano called Diamond Head, glowing softly into the evening.

Hollywood in Honolulu is the Kualoa Ranch, part of the Swingaround package. The sprawling 4,000-acre property has been the set of many blockbuster movies and hit TV shoes, including “Jurassic Park,” “The First 50 Dates,” “Windtalkers,” “Lost,” “Godzilla,” “Pearl Harbor,” “Hawaii Five-O,” “Mighty Joe Young,” and many more.

First acquired by Dr. Geritt Judd in 1850, it is now run by Joe Morgan. Morgan, the sixth generation descendant of Dr. Judd, respects the sacred history of the property (it used to be a spiritual place in ancient Hawaii, when the state was still divided into different kingdoms). Instead of making a profit out of it by commercializing the area, Morgan is one of Hawaii’s advocates of conservation.

“The movie business has very good people. They take good care of the property. It might seem like they’re destroying the land but they really don’t. We’re an agricultural land so it’s not usual for the land to be planted on and replanted,” Morgan said. 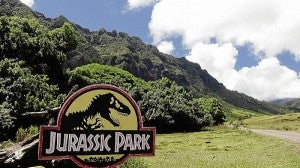 “Windtalkers,” he said, is so far the biggest movie with the most effects—272 major explosions and 700 extras. The production crew took over an entire valley for six weeks, and at one point practiced a 20-minute scene for three weeks since they needed to shoot the entire thing only once.

Mini-circle island tours give you a fantastic view of the Hawaiian coastline and more. Ride down Hanauma Bay toward the popular tourist attraction called Blow Hole, where the sea crashes against the rocky cliffs of the coast in a dramatic show of water eroding the land.

Then hop on to the Pali Gap for a spectacular view of valleys and rolling hills. The chilly wind howls and wheezes as you stare at the magnificent splendor of Mother Nature, an unforgettable experience.