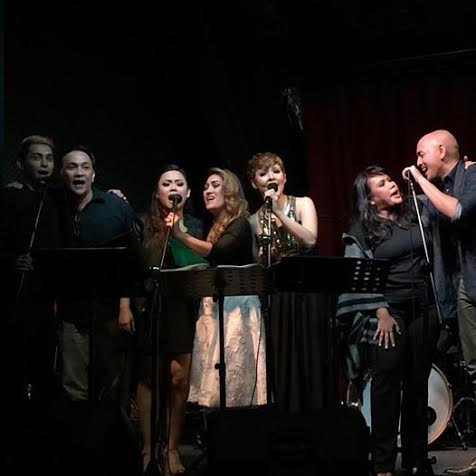 ‘Mundong Entablado’: A sensational night for the original Filipino musical

The “trophy” in question was a jocular reference to the Gawad Buhay! Awards for the Performing Arts, which Philstage has been handing out for the past seven years in a ceremony that, while definitely no match against the scale and spectacle of the Aliw Awards, can already claim to be the most legitimate of its kind.

“Mundong Entablado,” the fifth edition of the One Night Stand cabaret series pioneered by Joaquin Valdes, Chinie Concepcion and Mica Pineda, proved to be more festive reunion than concert, like one huge artistic family coming together for two hours of belting and repartee. The air was rife with familiarity, the sense of celebration quite infectious.

Since its inception last April, One Night Stand had so far been about uneven singing and tipsy bantering, its theme nights providing a venue for theater actors to let their hair down and let the alcohol do half the talking and singing (in keeping with the art form’s true spirit).

Last month’s edition was a glorious departure from the mold: Carla Guevara-Laforteza’s 40th birthday concert. It was a scorcher of an evening, her take on Andrew Lloyd Webber’s “Unexpected Song” quite the bravura showstopper, one of those ephemeral moments theater worshippers live for.

“Mundong Entablado,” directed by Topper Fabregas, deigned to raise the bar even higher for the monthly cabaret: Its theme was the original Filipino musical.

Even in timing, it was already a cheeky move. Only a year ago, theatergoers and the culture-loving public were treated to something rather similar, but of much grander proportions: “Musikal!”—the 45th anniversary concert of the Cultural Center of the Philippines (CCP).

“It was a night bigger than any other,” we wrote, as the who’s who of the local performing arts descended upon the palatial Tanghalang Nicanor Abelardo in a starry rendezvous.

“Mundong Entablado” was a much smaller setup with fewer performers—downscaled to the max, to use the pedestrian expression.

But the concert itself  was, in a word, sensational. Buencamino, together with Bituin Escalante, Sweet Plantado-Tiongson, Cris Villonco, Kim Molina, OJ Mariano and Sandino Martin—all of them having starred in original Filipino musicals—stormed the stage and, again, to use a common phrase, sang the hell out of the night.

Count them—17 numbers, including four medleys, representing 16 musicals. Still, already clocking in at a little over two hours, the selection felt oddly limited.

For one, there was the lack of English language work such as Trumpets’ visually stunning “The Bluebird of Happiness,” or 4th Wall Theatre Company’s “Rivalry.”

And, given that more than half of the selection were musicals shown within the last five years or so, this ostensible preference for recent work missed the likes of Dulaang UP’s (DUP) “Ang Nawalang Kapatid” and “Ang Huling Lagda ni Apolinario Mabini”—both premiered splashily to acclaim last year—or the Philippine Educational Theater Association (Peta) warhorse “Care Divas,” or the late great Mario O’Hara’s “Stageshow” (in which Buencamino danced up quite a storm three years ago).

More original Filipino musicals are being staged or restaged these days, and more importantly, being patronized by audiences. Parallel to this happy development, the days when exclusivity and territoriality governed the country’s various theater companies appear to have largely vanished now, with everyone from directors to designers freely hopping from one company to another, wherever work may be found.

It’s a tighter, more harmonious community, where the goal is simply to put on a darn good show.

Look no further for proof of this bountiful age than in Peta’s “Rak of Aegis,” which, having played more than 200 shows in less than two years, already occupies its own legendary perch in the industry. Beyond being a wildly entertaining work, it has also become sort of a gold standard in crafting a jukebox musical.

That “Musikal!” and “Mundong Entablado” each utilized medleys of those vocal cord-busting Aegis songs as act enders must speak only of the clout Myke Salomon’s revitalizing orchestrations have acquired.

An even better example of the genre (to us, at least) is Culture Shock Production’s “Sa Wakas,” the middle-class love triangle told in reverse in the style of Stephen Sondheim’s “Merrily We Roll Along,” that employed songs by the now defunct band Sugarfree.

Hearing Villonco, Martin and Molina tear through “Prom,” “Ikaw Pala” and “Bawat Daan” (an original song written specifically for the stage) was a ravishing reminder of the heart-tugging beauty those songs, rearranged by Ejay Yatco, possess.

Or how about Dalanghita Productions’ “Kung Paano Ako Naging Leading Lady,” which this year became local theater’s version of a summer blockbuster? It was a laugh trip from start to finish (and featured what is, in our book, the year’s best musical theater performance so far—Molina’s as the ambitious Viva). The last time a fantastical superhero musical hit this big was the Tanghalang Pilipino moneymaker “ZsaZsa Zaturnnah.”

These days, historical work also remains a reliable source of inspiration. Ryan Cayabyab’s take on the illustrious José Rizal novels are already in a league of their own, represented during the concert by Buencamino’s haunting “Awit ni Isagani” from “El Filibusterismo,” and Plantado-Tiongson’s medley of “Awit ni Maria” and “Awit ni Sisa” from “Noli Me Tángere” (“The nerve!” she exclaimed at the end, a finger pointed at herself, to laughs and cheers).

There’s even “The Mahabharata,” which became “Ang Nawalang Kapatid” (“the year’s best and most complex dancing,” we wrote in our theater roundup last year, by DUP’s talented corps of student-actors).

The movies, too, have had their slice of the stage. “Himala, The Musical” provided the medley that thunderously concluded “Mundong Entablado.” Scored by Vincent de Jesus, it was last staged three years ago in concert form starring May Bayot, Isay Alvarez and Dulce (the last two the same powerhouse duo that anchored the 2013 revival of what is widely considered the mother of original Filipino musicals, “Katy!”).

Now, there’s “Maxie the Musicale,” an ebullient and entertaining, if unevenly written, take on Auraeus Solito’s award-winning film; and yes, despite all that’s been said of it, even Resorts World Manila’s crowd-pleasing “Bituing Walang Ningning,” adapted from the Sharon Cuneta-Cherie Gil classic.

More than anything, “Mundong Entablado” was a splendid reminder of where the original Filipino musical is right now: front and center of our stages. May it never leave that spot, and may it rain trophies on anyone who’s doing his or her share to help it live on forever.

E-mail [email protected], or visit him at www.vincengregorii.blogspot.com.