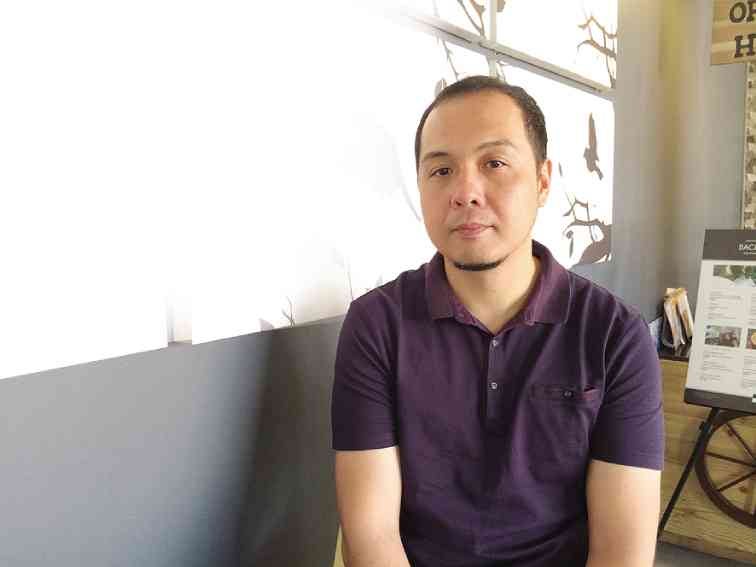 FROM THE COLLEGE of Music building, Tarog would walk to the UP Film Center to watch Kurosawa films. POCHOLOCONCEPCION

Jerrold Tarog–how he went from agriculture to music to ‘Shake, Rattle & Roll’ to ‘Heneral Luna’

These days, the talk of the town are two phenomena: “Aldub,” the continuing love story on noontime TV; and “Heneral Luna,” a historical film that has achieved the near-impossible feat of sold-out screenings in most theaters for a month now since it opened.

People who line up to watch “Heneral Luna” sit in rapt attention as the film unfolds. They are said to applaud at the end, praise the film on their Facebook accounts, and keep discussing with friends its quotable dialogues—a number of which have appeared as online memes.

Also selling well is a movie-book tie-up containing an interview with Dr. Vivencio Jose, author of “The Rise and Fall of Antonio Luna,” on which “Heneral Luna” is based.

The film has been chosen as the official Philippine entry to the foreign language film category in the annual Academy Awards.

Tarog would rather avoid crowds. It’s just his nature; he’s soft-spoken and self-effacing.

When he sat down with Inquirer Lifestyle, he chose to meet in an unassuming coffee shop in San Juan. He went straight to the counter, ordered coffee and paid for it.

But there’s one thing the mild-mannered filmmaker has in common with the hot-tempered Antonio Luna: Both are good strategists.

Tarog says he spent one year of preproduction before shooting “Heneral Luna,” whose lead character was said to be famous for his brilliant defense strategies in the Philippine-American War.

There was also a marketing plan, Tarog explains, which he followed with the guidance of Dakila—an organization of artists, students and individuals whose vision is aligned with his objective for the film.

For three months—June to August, just before it premiered—Tarog went on a 36-school tour nationwide, giving talks about his film and showing a 12-minute preview to an audience of 1,000 to 3,000 students each time.

“Sila yung pinaka-crucial,” Tarog says of the students, who comprised the majority of the audience on the film’s initial run. They were the same students, he adds, who made noise on social media when theaters started pulling out the film on its second week.

The same thing happened, he notes, when his 2010 film, “Senior Year,” was shown.

Before it opened, Tarog says the film had 20,000 followers on its Facebook page. He expressed an appeal to followers when SM and other theaters started withdrawing the film due to low turnout. It was extended, he says, “although on a lower scale compared to ‘Heneral Luna.’”

The 38-year-old Tarog says that, among nine feature films he has done so far, “Heneral Luna” is the most complicated—big in scope, difficult to shoot, but ultimately rewarding. “Pero marami pa kaming plano,” he adds.

Yet becoming a filmmaker was not in his original career plan. He didn’t really know what he wanted to do while in college.

Tarog—the only child of Jose, an OFW from Bicol, and Aurora, from Leyte—was born in Manila but grew up in Laguna. After attending the University of the Philippines (UP) Rural High School, he enrolled in an agriculture course at UP Los Baños. That was the only course to take, he says, “pag hindi mo pa alam ang gusto mong gawin.”

He was getting poor grades and, after two years, was asked to leave the college. He entered the UP College of Music in Diliman because “music naman talaga ang first love ko.”

He recalls being forced to take piano lessons at age 7. He started learning to play drums in grade 6.

At UP Diliman his musical tastes expanded, “from classical to rock to jazz, and then tribal music ng iba’t-ibang bansa… Sobrang na-fascinate ako.”

But he finished college, with a major in Composition. For years he played drums in a heavy metal band that had gigs at Club Dredd.

In the music video of “Heneral Luna,” Ebe Dancel is seen singing the film’s theme, “Hanggang Wala Nang Bukas,” with a band that includes Tarog on drums.

He remembers the first time he got curious about film. Because the UP College of Music sat beside the UP Film Center, “nung third year college ’pag walang pasok nanunood ako ng mga pelikula… mga Kurosawa at iba pang international films.”

He says he realized music and film had similar elements and this gave him an idea: “Feeling ko kaya kong gumawa ng pelikula. Nag-build up yung passion.”

After graduation he found work writing musical scores for Bong Revilla movies, and later for Dante Mendoza. “On the side,” he says, “I was shooting short films, humihiram ako ng camera, basically self-study.”

He credits Ronald Arguelles of Cinema One for giving him the break.

In 2007, his first feature film, “Confessional,” produced by Cinema One Originals, won awards in international festivals.

For “Heneral Luna” he sought help from friends; it was first offered to Imee Marcos, and Tarog himself presented the project to Regal.

In hindsight, the first few rejections were a good thing, because it led him to Nando Ortigas, who agreed to bankroll the film.

Tarog says John Arcilla was his choice to play Heneral Luna. Also short-listed was John Lloyd Cruz, but his contract barred him from doing the project. The offer never reached John Lloyd.

Tarog met Ortigas through Ed Rocha, one of the writers of the original English script of “Heneral Luna.” Ortigas and Rocha were close friends—Rocha’s wife was Ortigas’ prom date in high school.

Tarog says that Ortigas—a member of the business clan—is a frustrated artist: “As a businessman, never niya nagawa talaga yung gusto niya. E ngayon, he has more money that he can use, so, go, nag-fund siya ng pelikula.”

Tarog is upbeat about the chances that the second film would push through, even as he admits that he has not discussed details with Ortigas and Rocha—with whom he has formed Artikulo Uno Productions.

“One reason I’d like to complete this historical trilogy,” he posted on Facebook, “is so we can paint a rounder portrait of (Emilio) Aguinaldo. No villains, just humans.”

He points out that Luna, Del Pilar and Quezon are “flawed characters. Andaming kagaguhang ginawa nila sa buhay.” But again he stresses they are not evil, “only human.”

Has he been getting more offers to do films?

“Yes,” he says. “The challenge is how to attract the audience.”

A mainstream audience flocking to see an indie film is unusual, and Tarog says, “Sinuwerte lang kami, tama yung circumstances, tama yung support na nakuha namin. We had a plan, and we crossed our fingers that it would work. And it worked.”