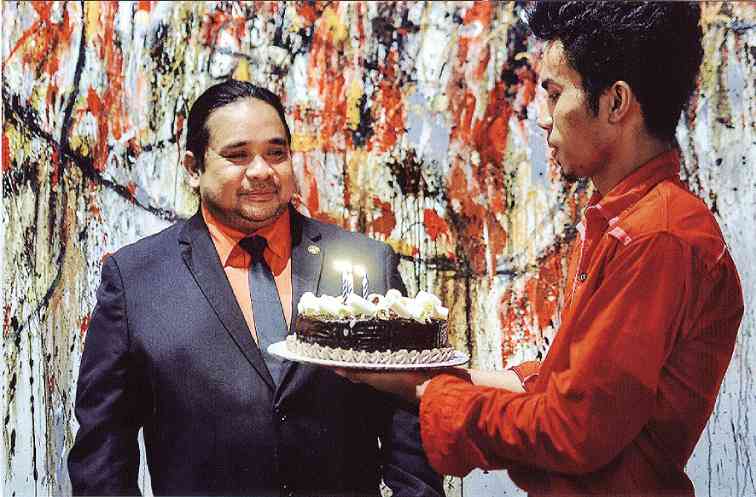 SIOMontera opened his one-man show on his birthday.

Quite a number of art lovers attended the opening of “Juxtaposed,” an exhibit at Qube Gallery in Crossroads, Banilad, ongoing until Sept. 29. “Juxtaposed” has to do with placing different things together to create an effect of contrast, or perhaps kindred purpose.

Qube has put together two artists and their chosen expressionism. There is Italian-Venezuelan Jose Antonio Nigro with a collection of photographs he has taken of places he has visited all over the world.

And then there is Sacha Cotture with his sweeping abstracts in vibrant colors. He is a Swiss architect who has settled in Manila with his family. Sacha and Jose Antonio had never met until the exhibit opened on Sept. 10.

Before this exhibit, Qube Gallery held an important one-man show by one of Cebu’s most eminent artists: Dennis “Sio” Montera. The opening coincided with his birthday, so there was a cake with candles to blow. Helping him were his wife Maureen and their daughters Mikee and Kyree.

Sio’s exhibit was titled “In Situ: Abstracting Identity with Migration.” He is considered a master abstractionist, but he can come up with some very realistic portraits on commission.

Sio comes with impressive credentials. He obtained his Master of Fine Arts degree in 2004 from the University of the Philippines (UP) Diliman. He was a full-time art professor at UP Cebu.

He was president of Pusod Cebu Visual Artists Inc., and founding member of the Creative Cebu Council. Currently, he is vice head of the Committee for Visual Arts of the National Commission for Culture and the Arts (NCCA).

Sometime ago, Sio left for Taiwan to immerse himself in a different environment and its culture. The result was a new collection of powerful abstracts, half of which were painted in Taiwan, and the other half in Cebu. Hence “In Situ,” which means “In Place.”

Earlier, Qube presented a solo exposition by rising Cebuano abstract painter Kidlat. His name means “lightning bolt,” and that’s how he wants to be strikingly known.

Kidlat went to art school but dropped out, and expressed himself by taking to the streets. He is one of the founders of Cebu’s most prolific street art groups: Ubec Crew, and the Junks Collection.

His clever works include different formats, such as paintings, sculptures, ready-made artworks, and installations. They play with subjects in minimalism highlighting ironies and glorifying typicalities. Get that?

Speaking of artists, Mar Vidal is ensconced as one of Cebu’s veteran masters of the first magnitude. He is also a very good teacher. Among his pupils was a little girl named Monique Lhuillier whom he taught how to sketch. That led her to clothes designing.

Now, Mar is also known as the father of Izarzuri “Zari” Vidal, gifted with a fine singing voice, nurtured to perfection at St. Scholastica’s College with a scholarship from the Arts Council of Cebu.

Both Mar and Zari were in focus at the elegant dinner hosted by the Cebu City Marriott Hotel in honor of Cebu’s senior lifestyle writers. It’s a “once-a-year” date, they quipped, as they filed into the well-appointed ballroom.

Zari Vidal wowed all with a repertoire that included “Stranger in Paradise” from “Kismet”; two songs from “Phantom of the Opera”; “Nessun Dorma” from the opera “Turandot”; and, as requested by Chinggay Utzurrum, the aria from “La Traviata.”

She also sang the theme from “The Mission” upon the request of her father. “I can’t say no as it is his birthday,” said Zari. A birthday cake was brought in for Mar as everyone cheered and wished him well.

The executive chef was asked to come out so that he could also be cheered, and congratulated for the fine plated menu served that evening. It started with succulent rock lobster and huge scallops.

The entree was a medallion of roast beef tenderloin while dessert was watermelon panna cotta. Excellent, chef Chachpol Suaisom. He comes from Thailand.