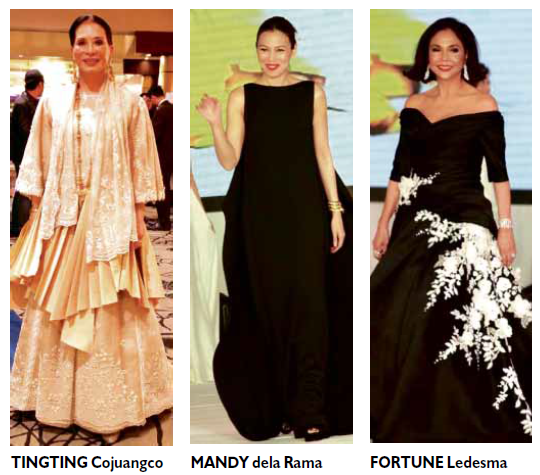 Your mantra for the week: “All is good, all is well, all is perfect in my life.”

LAST Sunday, Sept. 20, we wrote about various types of people who have succeeded in making happiness a choice rather than an objective.

Here are the rest:

9) Those who are healthy physically, mentally and emotionally, as in emotionally intelligent.

10) Those who are happily married, especially when both were already happy before they married—meaning two happy individuals getting together to share their happiness.

11) Those who have many friends.

12) Those who are generous. Studies have shown that generous people are seldom, if at all found in mental asylums.

13) Older or mature people who have learned to focus on things that make them happy.

14) Those who can remember life’s lessons and not the aggression.

15) Those who have a sense of humor and can easily laugh at themselves.

16) Those who have discovered the God within and have built a personal relationship through the practice of the five IAMIST’s grounds of loving, forgiving, releasing, blessing and tithing.

That is why IAMISM is a course on Happiness and Life Management. After all these, the most important thing to remember is to get rid of negative thinking.

Here are some suggestions on how to do it:

1) Start by simply noticing when you are thinking negative.

2) When negative thoughts come to mind… pause, take a few deep breaths, and tell yourself, “I will wait a few minutes.” Meanwhile think positive thoughts like bringing to mind all your heart’s desires and what you can do to manifest them.

3) Declare negative-free zones throughout the day.

4) Identify some of your minor negative habits and stop doing them.

5) Increase the duration of your negative-free zones.

6) Go to the major grounds of negativity in your life and put up forbidden signs.

Do the above as your entry point to a happier, more fulfilling life.

It’s jazz time on Oct. 3 at the Makati Garden Club with Brass Munkeys’ lead saxophonist Archie Lacorte. He earned his master’s degree in music in Hiroshima, Japan, and has performed in various music festivals around Asia.

Last Tuesday was truly an amazing day to negotiate traffic en route to two parties. I left Makati at 5:15 p.m. for Manila Diamond Hotel and got there by 5:50. Then I left the hotel at 8:15 and arrived at Makati Shangri-La 10 minutes to 9 p.m., just in time for dinner.

Congratulations to HPG and MMDA for the good job they are doing.

My first stop was cocktails at “Tingting Cojuangco’s List: Elegant Filipinas,” in which there was no lack of elegance either with the guests and even more so with the awardees like Tootsy Angara, Ching Cruz, Lucy Gomez, Zelda Kienle, Fortune Ledesma, Amparito Lhuillier, Mandy dela Rama, Cindy Yang, and Vicky Zubiri.

The presentation of awardees was followed by a fashion show of designers Albert Andrada, JC Buendia, Rajo Laurel and Ronaldo Arnaldo—to the great delight of the fashionistas. There I met two ambassadors to the Philippines, Panama’s Roberto Carlos Vallarino and Thailand’s Thanatip Upatising.

The atmosphere at Diamond Ballroom, which was packed, can be likened to a party given by Tingting to celebrate a birthday or an anniversary because most of the guests were recognizable faces. It was nice chatting with Max Kienle, husband of Zelda whose brother-in-law Martin Kaspar was my Stars of Giorgio chef and now owns and runs L’Entrecote at BGC.

Also, Nena Casimiro, who told me, “I read your column every Sunday and even when I disagree with you, I still want to keep reading.”

Happy to know that Tina Ocampo and Anton San Diego have gotten over their helicopter crash trauma.

What was striking about that evening was seeing the always lovely Tingting in an exquisite Maria Clara-inspired eggshell beige gown seated next to still attractive Imelda Marcos, as if the two had been struck by amnesia and that Feb. 25, 1986 never happened. Truly, only in the Philippines.

At Makati Shangri-La’s Rizal Ballroom, Helen Ong, striking in a red lace gown, was celebrating the 12th year of raising funds for the Philippine Cancer Society (PCS) by presenting the year’s Best Dressed Women of the Philippines.

The evening began with cocktails at 6:30 p.m.; dinner at 8:45 while the awards for the Extraordinary Men of Influence were being given out; followed by a raffle which won for designer Ito Curata an Eddie Baddeo gown. I wonder how Ito would look in this gown.

We thought that the best-dressed women would finally make their walk on the ramp, but instead an auction was held—apparently to raise more funds for the PCS.

No wonder my first cousin Lito Sandejas—whose mother is a Sison—was present because he happens to be PCS treasurer and he relayed that, last year, “Helen raised six million pesos net for us.”

Beside him was a kin of my mother, Roberto Paterno, chair and president of PCS, who was with his wife Bernadette, one of the original Bayanihan dancers along with Diana Carlos-Syquia, who was a radio co-host of mine once upon a time.

At the ball, I met other ambassadors to the Philippines: United Kingdom’s Asif Ahmad, Singapore’s Kok Li Peng and Brunei’s Malai Halimah Yussof.

Their sparkling eyes matched the glitter of their gowns and accessories. They glided on the ramp and stage like they were in a reverie or a dream sequence in a film. It was their time to shine—indeed, they did.

At Tingting’s event in Diamond, where around 250 people attended, 90 percent were familiar faces and the atmosphere was of understated elegance.

At Makati Shang’s Rizal Ballroom, only 10 percent of the invitees were known to me. Most were families and friends of the Best Dressed Women and the Men of Influence. Helen Ong should be commended for her expertise in organizing events as big as this. Truly, it was so efficiently managed.

I never saw so many beautiful gowns in one evening but thank God, there was a distinct difference between the Diamond affair and the Cancer fundraiser. Ironically, there was hardly any women wearing bling-bling in the Diamond Ballroom, except for Mrs. Marcos and a few others. But at the Rizal Ballroom, it was like an evening with Swarovski.

Sept. 22 was an evening that abounded with best dressed and elegant women. But, for me, the most elegant and well-dressed woman is one who stays well-defined and graceful—especially when she is totally undressed. And “That is the Bottomline,” as Boy Abunda would say.