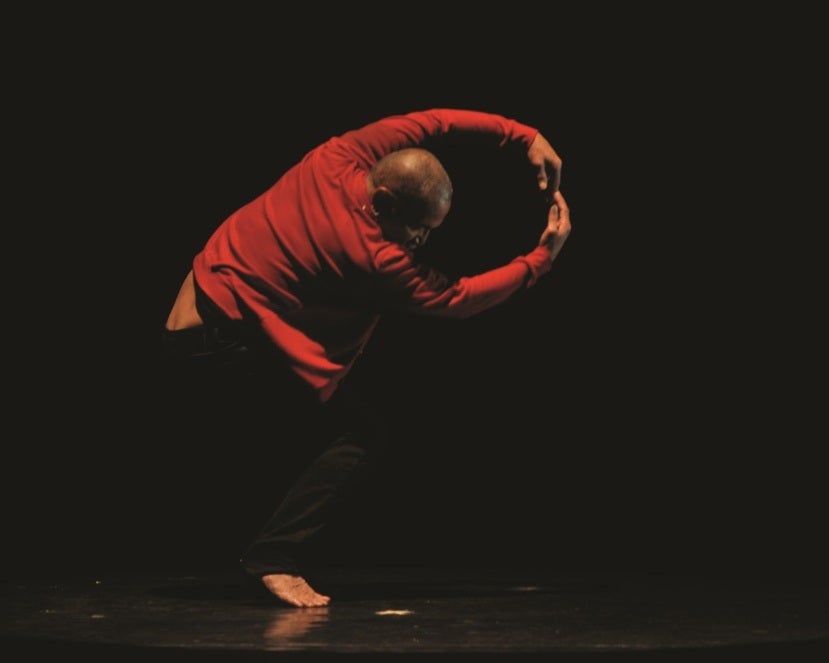 LABAYEN in “Will You Still Be There?” a piece that looks back on one’s life

Enrico Labayen, 62, is healing himself by dancing more slowly

On the misty stage, dancer-choreographer Enrico Labayen curled himself into a ball under a cloud of fabric, like a chrysalis on the verge of breaking out.

The music was aptly set to Puccini’s aria in “Madame Butterfly”; the title of his solo, “Another Butterfly,” was a homage. While vapor swirled around the stage, Labayen ceremoniously released himself from the layers of fabric and unfurled a golden fan, like a butterfly taking on wings.

As in many of Labayen’s works, “Another Butterfly” evoked a spiritual quality with the repetitive and hypnotic whirls, the deep backbends imploring to the heavens, the moments of stillness and the fan kicks that gave his skirt movement.

At the end, the bare-chested dancer stripped off his skirt down to his dance jock and turned his back to the audience to show his still-pert derriere.

The San Francisco-based Labayen was 50 when he performed this metaphorical solo in 2003 in Manila. He rendered the piece all throughout his 50s, showing off in the process his 28-inch waistline and sculpted musculature.

Labayen, 62, recently executed his “swan song,” “Will You Still Be There,” at Ballet Philippines’ (BP) “Body Positive +,” a dance concert for human immunodeficiency virus (HIV) awareness. Compared to the expansive movements and body-baring solos of his earlier dances, here he was covered in long-sleeved shirt and slacks, while sensually writhing his hips and beating his arms. He even parodied losing balance while doing an arabesque.

He is at that stage in his life when he can deliver high impact merely with his candor.

“You show what you can do at this age,” he says.

Labayen has developed his own movement style, which rebels against the ego-driven pyrotechnics of ballet.

“The classics don’t convey feelings for me,” he says. He pooh-poohs the multiple pirouettes, the flashy circuit jumps and the whirring diagonal turns that have audiences cheering.

“I can’t be a circus animal. I had to seek something intellectually challenging. Ballet has become robot dancing. It’s about impressing people. I’m interested in touching people.”

Labayen came to the Philippines to enjoy his honeymoon with his husband, John De Roy, a chiropractor, and to restage  three works for BP, among them, “Two Barres, a Man and the  Plague,” an autobiographical solo that explained the crucial moments of Acquired Immune Deficiency Syndrome (AIDS) and its social impact.

In the local context, BP chose this theme to make the public aware of the alarming increase in HIV numbers in the Philippines.

For 15 years now, Labayen has been open about his HIV-positive status. In 1989, he undertook a routine HIV test in a public health center. The results said that although he was HIV positive, he was asymptomatic, meaning he carried the disease but didn’t feel its symptoms.

“After a couple of years, you wait for its ugly head to stick out,” he says.

All those times, he remained prolific as artistic director of his  company, Labayen Dance. His works focused on spirituality, death, hospice care and conquering one’s fear of death. He was also active in the gay community and crusaded for AIDS and HIV awareness.

The real bombshell came last year when Labayen began suffering from yellow skin, stomach pain and severe weight loss. From 130 lbs, he dropped to 98 lbs. But thanks to ObamaCare, Labayen was able to secure a health insurance and got a good doctor and hospital.

After taking a battery of tests, he was diagnosed with hepatitis C, a serious liver infection. He was also found to be HIV-negative.

Like HIV though, the hepatitis C virus can be transmitted through inadequate sterilization of medicine equipment and needles, blood transfusion and sexual contact.

Although one burden had been removed, Labayen faced bigger challenges. One of the most effective antiviral medicines, Sovaldi, greatly lowers the risk of liver cancer, liver failure or the need for a liver transplant. However, the cost is  $84,000 for a standard 12-week course of treatment, or $1,000 a day.

The Bay Area dance community put up a website and organized a fund-raising event for Labayen. The dancers raised $27,000. Labayen also wrote to the manufacturer, Gilead Sciences, explaining his financial situation. Fortunately, the lab needed an Asian as subject to test the medicine. As an ideal candidate, he acquired the medication at a fraction of the prize.

Labayen chucked in the smoking and drinking for fresh juices and healthy food.

“Everything passes through the liver,” he says. Although he’s been cured of hepatitis C, he still has to deal with its outbreak, cirrhosis, or the scarring of the liver.

Labayen also developed tuberculosis. The antibiotic, Rifampin, is at $1,000 a pop. The doctor advised him to cure hepatitis C first so that the effects of Sovaldi wouldn’t be counteracted by Rifampin.

“I’m not contagious,” he says. “As you get old, you’re like a car. Your engine will need repair.”

Last year, Labayen stopped teaching and focused on healing himself. He gained 25 lbs and let his waistline expand to 32 inches, which is normal to most men. Changing his look, he went around with a shaved head, a skullcap and a goatee.

“I like to reinvent myself; if not, it would lead to complacency,” he says.

“I can do a penchée (six o’clock arabesque) and a pirouette,” he says. “I’m 62 and I’ve got a full life of experiences. I don’t have to extend my leg or do busy dancing. Silence speaks better.”