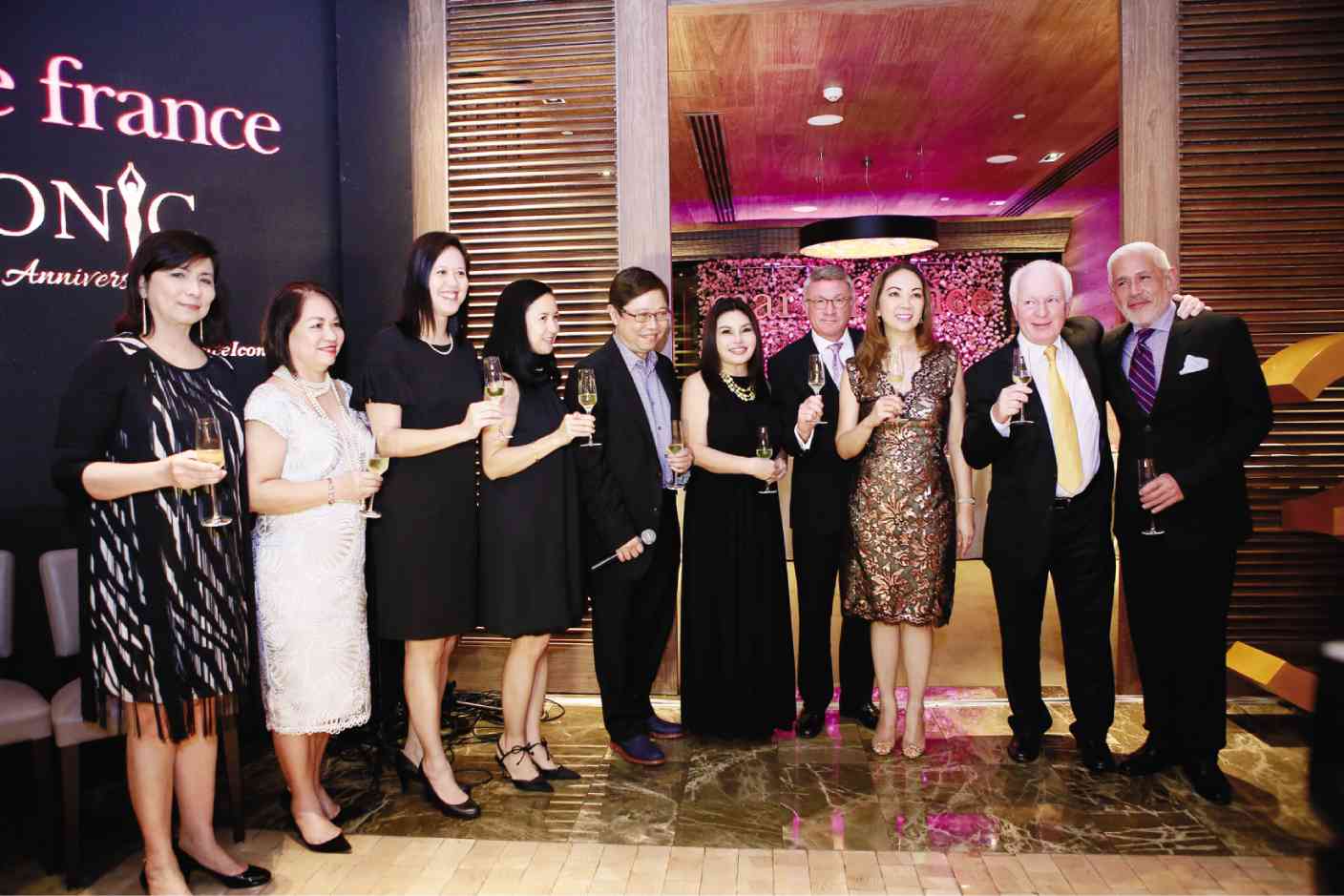 October is the month of the Holy Rosary, and the green flag for pre-Christmas bazaars. It is also the month of Oktoberfest and the Ball season.

The Red Charity Gala 2015 is almost here and Kaye Tinga and I, as organizers, are more than giddy with excitement! This year we are featuring the works of London-based Filipino fashion genius Lesley Mobo on Oct. 16 at the Makati Shangri-La.

We have something very “awards night-y” going on with one of our event partners. That’s definitely something we can all toast to.

Speaking of toasting, I raised my glass of bubbly to Cignal—now the country’s leading pay-TV content provider —and its one-millionth subscriber at a thanksgiving event last Sept. 23 at the Green Sun in Makati.

Among those who graced the event were Anne Curtis, her sister Jasmine Curtis-Smith and Paolo Bediones.

Pangilinan said Cignal was adding more programs and channels, and promised that it would continue to give subscribers the best channels and services.

I think it’s time for me to have my own show at Cignal.

When I have my own show, I have to look good. The camera does add 10 pounds on screen so I need to look my best. Good thing I can rely on an effective slimming company like Marie France, whose 30 years in the industry attest to its credibility.

George Siy, president and CEO of Marie France Philippines, attributes the company’s success and longevity primarily to its effective treatments and its decision to stick to modern, non-invasive methods.

Add to that a sharp marketing and operations team, good advertising and credible endorsers, then you have a winning formula for a highly effective and successful slimming company.

Since I already have Marie Claire to take care of my extra curves, I think I can indulge in eating an exquisitely filling meal.

Ruby Jack’s has finally opened at City of Dreams Manila. When I first posted about it, Pepper and I got really excited, and you should, too.

“Focusing on uncompromised, benchmark standards and promising a vibrant space with only the finest food and beverage offerings yet to be seen in the Manila restaurant scene, the creators and producers of the ever popular Ruby Jack’s Tokyo are very excited to bring Ruby Jack’s to City of Dreams Manila,” said Frederick Siy, president of Ruby Jack’s Manila Inc.

“Luxurious yet inviting, polished to the highest of standards yet unpretentious, and with clean and crisp interior design allowing our food and service to take focus—Ruby Jack’s Manila redefines what upscale steakhouse dining experience is to Filipinos,” he added.

Unlike other fine-dining restaurants, everything that Ruby Jack’s offers in the menu are showcased live, sure to capture every diner’s fascination as the culinary magic unfolds right before their eyes.

Ruby Jack’s cuisine resembles that of the vintage steakhouse but with a contemporary twist. It is proud of its 100-percent all-imported and carefully selected aged and fresh chilled non-aged beef cuts, premium lamb and poultry showcased in a glass-enclosed working showpiece meat cellar.

Utilizing both old and new world techniques, Ruby Jack’s cuisine respects the true flavor of the selected premium ingredients while keeping their freshness.

The interiors are beautiful. The bar and dining room used locally sourced wood for the floor, a great contrast to the stunning high ceilings.

Adjoining the bar area and specializing in Cuban and Dominican Republic’s finest cigars, the Cigar Room at Ruby Jack’s is a customized, intimate, lounge-style room for cigar and fine spirit aficionados.

For one night only, you’ve got to see the show “Beyond the Barricade.” It features former cast members of London’s longest-running musical, “Les Misérables,” such as Andy Reiss, who has played numerous male roles including Jean Valjean; David Fawcett (Valjean); Katie Leeming (Eponine); and Rebecca Vere (Cosette).

They are joined by an ensemble of talented musicians to create an authentic live experience, capturing all the passion and orchestration of the original shows.

“Beyond the Barricade” will be held in Manila on Oct. 7 at The Theatre at Solaire. It is produced by Lunchbox Theatrical Productions and Concertus Manila.

Tickets are on sale through TicketWorld. Call 8919999 or visit www.ticketworld.com.ph. For group bookings, e-mail [email protected]