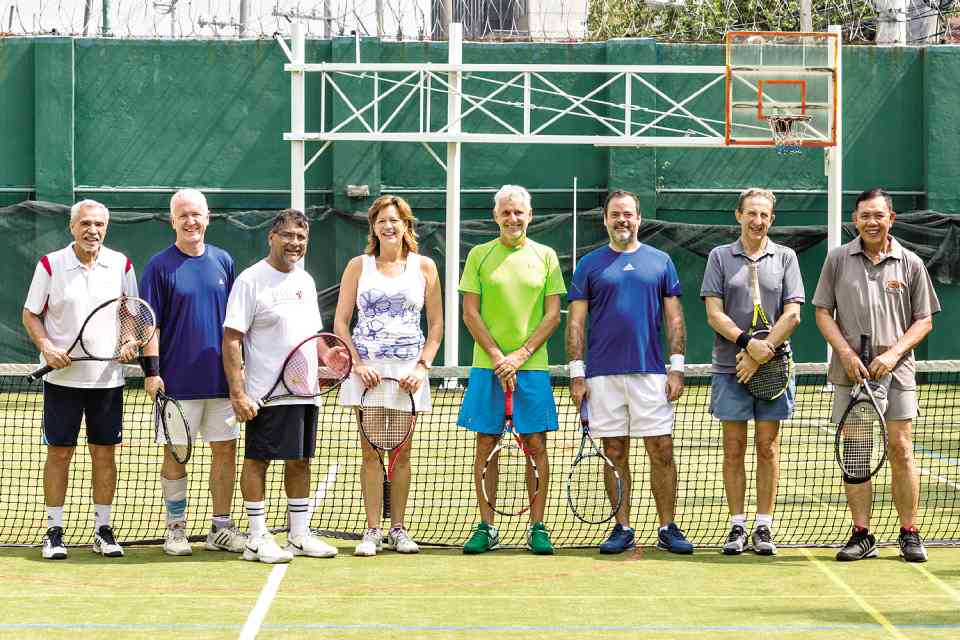 Even after a hard day’s night, as the Beatles’ song goes, you wake up early—very early—morning to get the chance to play tennis with some foreign ambassadors.

It was British Ambassador Asif Anwar Ahmad’s idea to invite us and a few diplomats over to his official residence for some friendly matches. It was on a Sunday, Sept. 6, long after Wimbledon, but that didn’t stop the affable ambassador from calling it our version of Wimbledon.

And Ambassador Ahmad was also right to note the “growing number of ambassadors who have rediscovered tennis during their term in Manila.” Swiss Ambassador Ivo Sieber, for example, talked Ahmad into resuming the game after a break of 30 years.

Our Sunday “Wimbledon” was also meant to be a despedida for Sieber, who was ending his stint in Manila and moving to his new posting in Bangkok the following week.

It was former Chilean Ambassador Roberto Mayorga, our longtime tennis buddy with his wife Paulina, who brought me to Ahmad’s tennis circle. Of course, Mayorga was there early morning. Since his Manila posting ended more than a year ago, he has returned to resume his Calidad Humana project, this time with the Lopez Group. The project seeks to capture and promote the Filipino’s intrinsic happy disposition, compassion and sense of humanity in a book to be released soon.

Around half past seven in the morning, our potential tennis buddies/opponents started warming up on the grass court. Meet the diehards who stay loyal to the sport of tennis in a diplomatic world dominated by golf: Ahmad, Mayorga, Sieber, Spanish Ambassador Luis Calvo, Argentinian Ambassador Roberto Bosch, Indonesian Ambassador Johnny Lumintang, and Romanian Ambassador Mihai Sion.

Netherlands Ambassador Marion Derckx was also there, in tennis gear, although she was unable to play due to some muscle injury.

In a round-robin doubles format, with only three games per match, the games began almost on the dot; it was meant to be fun, Ahmad reminded everyone. Being the only girl, we felt like we had nothing to lose.

Did he say fun? Sure, but competitive fun. They were serious at it. The Indonesian ambassador, who also plays golf, by the way, loved to do drop shots—very tricky. Ahmad—did he say he stopped tennis for 30 years?—avoid his forehand, no matter what happens. And—he had this knack of landing the ball right in the middle, between you and your partner, which is where you wouldn’t want your opponent’s ball to land. (The UK ambassador apparently has been training regularly, with perhaps some secret practice.)

The Argentinian ambassador is a power player, and what more can I say, we won a match. The Spanish ambassador, we learned, has played the game since his youth; that was obvious—he had very good shot selection.

The honoree, the Swiss ambassador, was the jolliest on the court, and like we shouted at him—“We didn’t know you could run so well!” Don’t let his lethargic warm-ups fool you. His court coverage was pretty impressive, enough to help him with those winners.

The Romanian ambassador could be consistent and had those “lob shots” (how did he know we hated those?).

The ex-Chilean ambassador is a seasoned player, with a complete game. We always enjoy playing doubles with him and Paulina.

Before noon and after many matches, the diplomats called it a day, although Sieber was ready for another round, and enjoyed the breakfast of tuna pan de sal and Eton Mess the household of the UK ambassador had prepared.

It was a light, easy banter among friends, with Ahmad leading the lively exchange.

Ahmad is among the most active and dynamic diplomats in the country. He speaks many languages, Tagalog among them, and can tweet in Tagalog (handle, @asifaahmad).

We remember how, in the launch of Tesco, he was describing to the Lifestyle journalists how he knew the SM Aura supermarket like the back of his hand. He apparently loves food and does cook.

He also has an interesting life story. As he narrated in the Megaworld’s book titled “Chronicles of Visions,” he was born in London but grew up in different countries as a diplomat’s son.

The family had a cushy life until the Bangladesh Liberation War. As a 17-year-old he returned to Britain on a government study grant, and had to fend for himself. He studied economics at Durham University, graduated with honors, and started a career in international corporate finance.

However, what many Filipinos should and must note was how, right after the “Yolanda” disaster struck in the Visayas, the UK, with Ahmad at the helm, extended P13 billion in aid, deploying aid workers, military personnel and cargo flights.

In the next few months, Britain continues to be in the thick of culture and lifestyle activities that range from the Bond, as in James Bond, to The Bard (Shakespeare, if you didn’t know). It’s the British embassy’s way of sharing the best of British business and culture.

“We have seen a surge of interest in British cars, fashion brands and food and drink products in the Philippines,” said Ahmad in a press statement. “More people are experiencing world-class British creativity, innovation and heritage. More Filipinos are visiting the UK than ever for business, to study, or to go on holiday… If you can’t come to Britain right now, let us come to you.”

In November is the GREAT British Shopping Contest starting, with over 30 participating British brands in outlets all over Metro Manila and selected provinces.

The Great British Festival is back next year in February at Bonifacio High Street in Taguig.

Once in a while diplomats make room for lifestyle activities, and when they do, diplomacy gets a good workout.