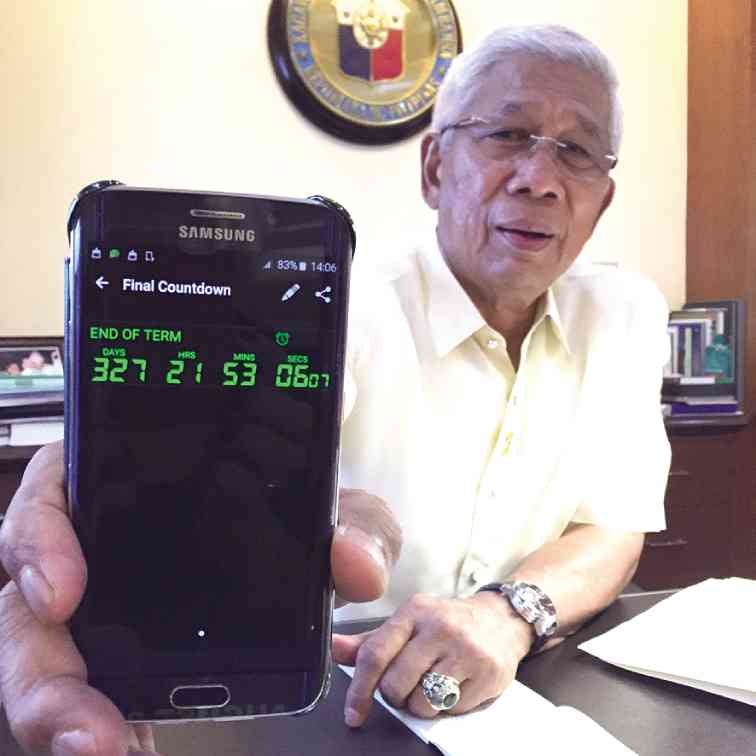 DEFENSE Secretary Voltaire Gazmin is probably the only Cabinet member who keeps a stopwatch that is counting down the days when he retires from work to look after his grandchildren.

Secretary Voltaire T. Gazmin pulls out his smartphone and turns on an app that details the number of days left before he leaves the Department of National Defense.

The screen says 327 days and a little more than 20 hours before “End of Term” during this interview, held on the first Friday of August. The phrase “Final Countdown” also appears on the screen.

The retired Army commander—whom then President-elect Aquino handpicked as his Defense Secretary—is already looking forward to the day he resumes his “apostolic mission” of looking after his grandchildren while shooting the breeze on a rocking chair.

There would also be a lot of golf with his friends. “’Yun lang ang ambisyon ko,” he tells Inquirer Lifestyle.

Gazmin may be one of the most low-key members of the Aquino Cabinet, but the high level of trust and confidence bestowed on him by the President and his siblings is something other officials can only wish for.

Imagine being asked personally by presidential sisters Ballsy Aquino-Cruz and Pinky Aquino-Abellada in 2010 to accept the defense post, just when other wannabes were jostling for jobs in the incoming administration.

Gazmin also admits he really wanted to work for Mr. Aquino, whom he fondly calls “’Tol (‘bro’ in English slang).”

(The President’s late father, former Sen. Benigno “Ninoy” Aquino Jr., was Gazmin’s wedding sponsor when he married the former Rhodora “Rhodie” Hernandez 46 years ago. It was Gazmin’s father, Brig. Gen. Segundo L. Gazmin Sr., who insisted on Ninoy   being part of the entourage.)

Voltaire Gazmin initially wanted a post “na pakaang-kaang lang (that would not be too intense),” but he also realized that Mr. Aquino could face rough times with the military, just like his mother during her presidency.

“I foresaw the problem with the AFP (Armed Forces of the Philippines),” said Gazmin. “Remember, President (Gloria) Arroyo made some midnight appointments in the AFP. ’Yun ang problema. I told myself I had to help him.”

Flashback to the first Aquino administration, where Gazmin served as commander of the 1,500-strong Presidential Security Group (PSG) created in 1986.

The book “Under the Shadow of the Flag,” released last year, details how Mrs. Aquino herself chose Gazmin—who was detachment commander of Fort Magsaysay in Laur, Nueva Ecija, during Ninoy’s incarceration— to head the unit in charge of her safety and security.

More than the gallantry that Gazmin displayed for 11 years doing combat duty against the Moro National Liberation Front (MNLF) during the Marcos years, Mrs. Aquino was touched by the compassion he showed Ninoy in Fort Magsaysay.

At that time, Ninoy and colleague Jose Diokno shared a cell. When the two detainees refused food and drinks offered by the soldiers for fear of being poisoned, Gazmin would sneak into their cell to give them milk and biscuits.

“Ako lang ang puwedeng pumasok sa mga selda nila,” recalls Gazmin. “It was very hard [for me as their warden] because may attachment ako, but I was also a soldier and there were rules. But [Ninoy] trusted me because he knew I was his inaanak.”

His stint in the PSG proved to be the most action-packed in recent history. During Mrs. Aquino’s tenure, Gazmin and his team faced seven coup attempts staged by the Reform the Armed Forces Movement (RAM), and kept her safe and well.

“With flying colors” is how he describes the job he accomplished during those six intense years.

To create a new security unit for Mrs. Aquino, Gazmin pooled soldiers he worked with in Mindanao during his Army stint against the MNLF. He knew those soldiers well and was confident they did not have a political agenda.

Walk-ins were subjected to intense questioning to ensure their intentions were not laced with malice.

“People thought the PSG was composed of Tarlaqueños just because Mrs. Aquino was from Tarlac,” he notes. “Most of the troops were from Mindanao.”

And like all newly formed institutions, the PSG went through birth pains. The Mindanao veterans were new to the city. When given barong Tagalog to wear for a formal event for the first time, they wore promotional shirts that bore the names of bakeries and lumber companies as undershirts. “At naka-maong (They wore denim),” Gazmin recalls.

Another time, he specified leather shoes for another event. His men came in combat boots. “Leather shoes nga naman,” he says.

On one occasion that Mrs. Aquino graced at the Philippine International Convention Center, PSG members ordered to accompany her to the second floor struggled as they climbed the downward escalator.

Gazmin says the first two years were full of such amusing stories, but his boys’ loyalty was unquestionable. That was the most important thing.

And while the soldiers guarding Mrs. Aquino were brave, the President herself showed the same level of courage, even when rockets were being fired and bullets were grazing Malacañang’s walls as RAM members tried time and again to seize control of the Palace.

Gazmin says that during the bloody August 1987 putsch, he instructed everyone in the Arlegui mansion, where the First Family held residence, to cover all windows with mattresses, turn off all the lights and stay down.

“I go upstairs and see a light that was still on,” he recounts. “Mrs. Aquino was combing her hair. ‘Ma’am,’ I said, ‘bumaba na kayo at nagpuputukan!’ The President simply turned to me and said, ‘I must look presidential when I meet the press.’”

This, he adds, meant that the story which then columnist Luis Beltran insisted on that Mrs. Aquino hid under her bed when RAM rebels attempted to take Malacañang was rubbish.

Gazmin says there was a board that covered the gap between the mattress and the floor. To hide underneath, Mrs. Aquino would have to ask somebody else to lift the entire bed before she could crawl under it.

Gazmin adds he was both angry and disappointed at the RAM members who clearly wanted to grab the Presidency for purposes other than national leadership.

In the early days of the first Aquino administration, Gazmin decided to talk to one of the RAM leaders to see for himself how committed they were to their cause and discern whether they posed any real danger to the Chief Executive.

“Meron siyang sinabi, to the point he swore he will not fight me,” he recalls.

Gazmin adds it was more difficult for him to fight comrades than secessionist rebels from the MNLF.

“Sanay kami sa Mindanao, against the MNLF,” he says. “Pero iba ito dahil galing sa sarili mong unit, pareho mong AFP ito. Kabaro. In the end I was confident that my people will prevail because of their commitment and experience…”

At some point, Gazmin says RAM members even approached him to convince him to join them. He felt insulted.

“It was like they were testing how loyal or how committed I was,” he explains.

Did he ever tell Mrs. Aquino about that episode?

Not worth it, Gazmin replies. “Magkakaroon lang siya ng extra worry. Basta pakita ko sa kanya how committed I was. I will die for her and do anything to fulfill the duty given to me.”

His loyalty to Mrs. Aquino did not go unnoticed. Her successor, President Fidel V. Ramos, appointed Gazmin as defense attaché to Washington.

President Joseph Estrada then named him commanding general of the Philippine Army. And President Gloria Macapagal-Arroyo appointed him Philippine Ambassador to Cambodia.

Gazmin notes each President had his or her own personality. “Si FVR (President Ramos’ initials), sundalo ’yan. He expects answers directly. Walang paliguy-ligoy.

Gazmin was not personally acquainted with Mrs. Arroyo before she became President. Barely four months after Mr. Estrada was ousted from Malacañang in 2001, his loyalists gathered in Mendiola and staged a violent rally that got his successor nervous.

Gazmin says Mrs. Arroyo called Mrs. Aquino. They were still in good terms then. “Pinaalam ako kay Mrs. Aquino to talk to a group commander to explain which areas near Malacañang the government troops should watch, to teach them how to defend it. Nagkagulo kasi sa Mendiola,” Gazmin recounts.

During Mrs. Aquino’s final days, youngest daughter Kris asked Gazmin to visit her mother at the Makati Medical Center. It was here where the former PSG commander made a vow to his erstwhile Commander-in-Chief to take care of her only son.

“I told her, ‘Don’t worry about Noynoy (Mr. Aquino’s nickname),” he recalls.

Unlike most incumbent Cabinet members, Gazmin witnessed first-hand the strong emotional bonds among the Aquinos.

“Problema ng isa, problema ng lahat,” he notes. “Si Presidente is very caring to his sisters and was very close to his mother.”

Gazmin remembers the time when Mrs. Aquino was still President, when she and her son would always see each other in the afternoon once work was done.

“And I would like to refute the story that Mrs. Aquino played mahjong,” says Gazmin. “I never saw her in front of a mahjong table. Not in Arlegui, not even in Times Street before she transferred to Arlegui.”

So, where did that story come from? “People who are out to destroy the reputation of Mrs. Aquino,” he huffs. Eh, sino pa…”

In the final months of the second Aquino administration, Gazmin wishes that the next President would sustain the “good practices that helped develop the country and learn from mistakes of the previous presidents.”

Many of the resource persons interviewed for “Under the Shadow of the Flag” note how seldom Gazmin smiled. Why is that?

Then he flashes a wry one.