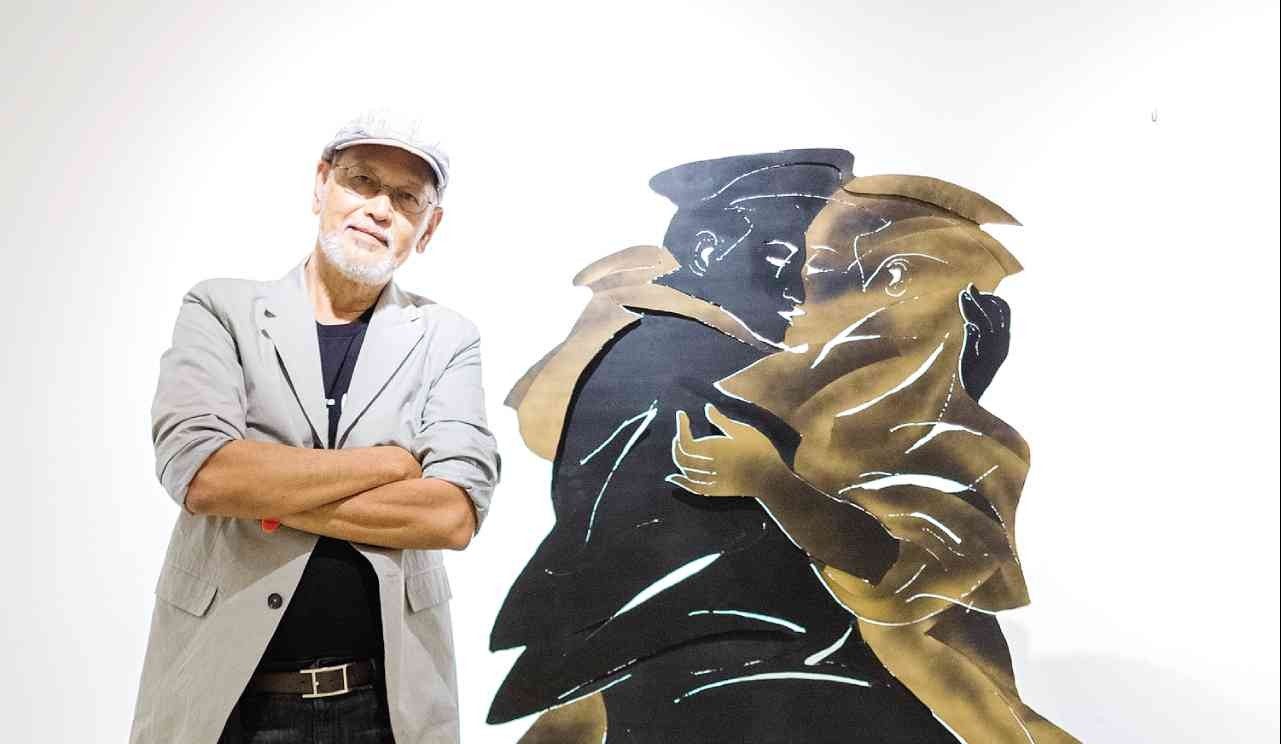 The works reveal how he responds to certain events,” art critic and historian Dannie Alvarez says, describing BenCab. “Imagine, he even had a series on earthquakes and typhoons. But while he may be reacting, perhaps violently, to certain situations, you never see it in his work. It is not an angry work. It is still a very composed, delightful painting. Pero ’pag tiningnan mo, malalim pala…”

One might call BenCab a “subliminal social realist,” his social commentary informed not by dogma or political theory, but by a very human empathy with the subject.

“My approach is really humanist,” says BenCab. “That’s how I touch people, because we have the same experience. I guess it’s part of my personality; I’m really a very positive person. But it’s also because of my background in newspapers and magazines. I’ve interacted with writers and photographers, so I chronicle my time, in a way.”

Another common thread in the artist’s work is his love for old-school draughtsmanship, which he traces back to his schooling in UP Fine Arts under maestros Castañeda and Miranda.

“I was among the last batch to study under the old masters,” recalls BenCab. “I still love drawing. Even if the work is abstract, the distortions fall in the right place because the basic structure is still the drawing behind it.”

Taken as a whole, the retrospective reflects how the artist has come to understand his role in society as a mirror of social and historical forces, a role whose precedents extend as far back as Rizal and Luna, and beyond.

Given the scale of the undertaking, the logistics of mounting the retrospective were formidable.

Tracking down the works was the first hurdle, says Alvarez.   There are a number of private collections with numerous BenCabs. For instance, Manolo Lopez has over 100 works, having started collecting the artist in the 1970s.

More elusive are works that have passed from one collector to another over the years. Tracking them down required a lot of detective work.

While the artistic value of the work to be included in the exhibit is incalculable, its monetary value is not. BenCab’s works have appreciated continuously since he was named National Artist in 2006. The recent sale of one of his paintings at auction for a record P46.7 million has upped the ante considerably.

According to Alvarez, the prices of BenCab’s works have quadrupled in recent months, causing the insurance costs of the exhibit to go through the roof. The total cost of the works in the exhibit, by today’s inflated market values, easily reaches a couple of billion pesos at least.

“A lot of the private collectors who lent us paintings for this exhibit made it clear that they’re doing this only for BenCab,” says Alvarez. “They wouldn’t lend their works to any museum otherwise.

“Some of them even came here to case the joint, to make sure the paintings would be secure, that the air-conditioning is right, and to see how the artwork would be transported.”

It might sound facetious, and not a little ironic, but Bencab’s body of work is due for a reassessment. After even a cursory survey of the works included in “BenCab: The Filipino Artist,” the big surprise just might be that he’s better than everybody thought he was.

In the book “To Paint Is To Love Again,” Henry Miller wrote:

“The practice of any art demands more than mere savoir faire. One must not only be in love with what one does, one must also know how to make love. In love, self is obliterated. Only the beloved counts. Whether the beloved be a bowl of fruit, a pastoral scene, or the interior of a bawdy house makes no difference. One must be in it and of it wholly. Before a subject can be transmuted aesthetically it must be devoured and absorbed. If it is a painting, it must perspire with ecstasy.”

If nothing else, BenCab’s paintings exude the love for painting itself, a delight in the draughtsman’s line and shade, the subtle nuances of color, the full range of human expression. This is evident in the following selection of works from the Metropolitan Museum retrospective.

“I was very much influenced by the magazine illustrators of my youth, such as Max Lalata of ‘Liwayway’ magazine. This painting of an open-air dance at a barrio fiesta shows that influence. ”

“During the centennial year, I did a series of paintings of turn-of-the-century women. I like the background, the way the sunlight falls on palay during harvest time. Pastoralism a la Amorsolo. But unlike Amorsolo, all of my women are looking out from the painting.”

“The Central Bank has a big collection of Philippine art. Then they realized that they didn’t have any BenCabs, so they commissioned this painting. I got the concept from a photo from a book on the Philippine-American War. I never painted Antonio Luna, but here you have Gregorio del Pilar and Emilio Aguinaldo.”

“This is a painting of Macario Sakay, the last revolutionary. It’s small, but I like it very much. I think it came out very well.”

“This shows the transformation of a tribal Filipino after he was adopted and baptized. This is one of the recurring themes in my work, the evolution of the Filipino after

the introduction of American colonialism. The ambivalence about modernity.”

“This is one of my few landscapes. This was done right after my divorce from (British journalist) Caroline Kennedy was finalized and I decided to come back to the Philippines. I did a whole series of landscapes like this. I don’t remember now where this seascape is. My state of mind at the time? I wanted to be alone. This is one of my few paintings without any human figures.”

“I was living in London when I did this, but I remembered how Ermita was in the ’60s. The women are from different places and periods. The woman behind the accordion gate I remembered from Mayhaligue. The bar hostess on display was from Ermita… It’s my commentary on a certain class of women.”

“This was inspired by my reading of Carlos Bulosan’s ‘America Is In The Heart.’ When I was in Hawaii, I also sketched the moncadistas, the early Filipino migrants who worked in the canneries. I wanted to emphasize the discrimination they experienced with the sign ‘Positively no Filipinos allowed.’”

“This was our maid in London, we had to rush her papers so she could go to England. Then she met an Englishman and got married. Do I consider myself an OFW? I guess so, because I spent 13 years in London. But unlike Grace Poe, I didn’t give up my nationality, because I knew I was going to be a national artist (laughs).”

“The owner bought this in a thrift shop in the United States for $4.99. I don’t know how it got there. Recently he was able to sell it for P4 million.”

“This was based on a drawing from life. I didn’t care kung maganda ang mukha. It’s a series of studies of Sabel, done in preparation for another work.”

“Around the time I was doing ‘Rock Sessions,’ I used to go to dance clubs. Things like this are painted from my head, without any reference. Nowadays artists get their references from the Internet, and sometimes you see the same images. That’s my advantage.”

“This is based on the Indian concept of time, and I imagined Sabel looking at it.” Eric S. Caruncho