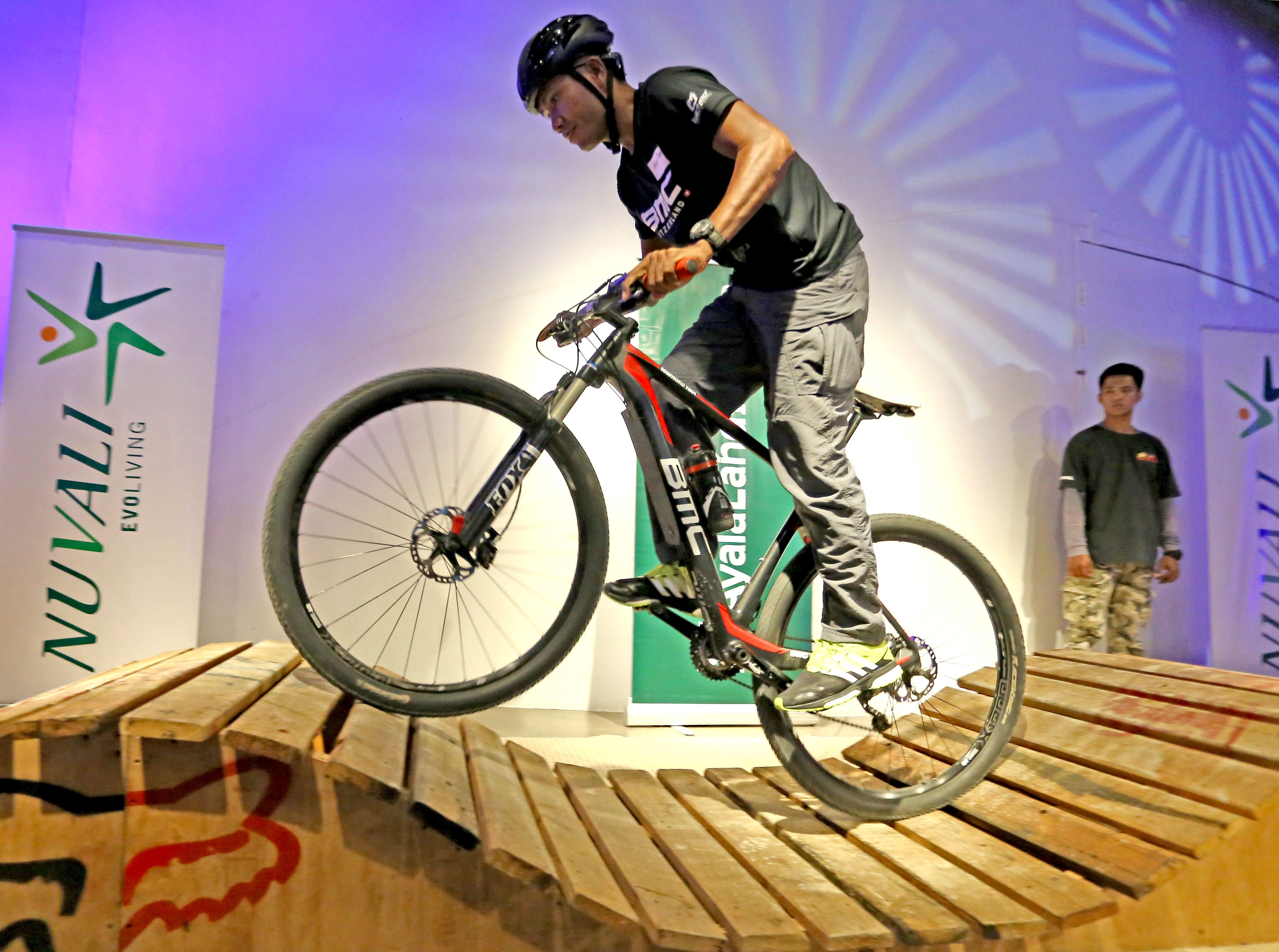 Indoor track during the press preview at the Mind Museum, a teaser of what to expect at Nuvali’s “Dirt Weekend." PHOTO: KIMBERLY DELA CRUZ

Elite bikers from France, Switzerland, Australia, the United States, Japan and Indonesia will fly into the country next month as the Philippines hosts, for the first time, the qualifying race for the Union Cycliste Internationale (UCI) 2016 World Mountain Bike Championship.

The qualifying race will be held at the annual “Dirt Weekend” on Nov. 6, 7 and 8 in Nuvali, Laguna.

There will be two race categories for the world champions. The top 20 males and females in each category will qualify for the 2016 World Mountain Bike Championship next year in France.

Now on its sixth year, “Dirt Weekend” is the country’s premier bike race, attracting both professional and casual riders. About 5,000 visitors are expected to drop in for the three-day bike festival, including 1,500 riders.

There will be a bike expo, food fair and other fun activities.

Nuvali, an hour-and-a-half drive from Metro Manila, is a thriving neighborhood that is bent on integrating bicycle culture into its commuting residents.

“We want to elevate the consciousness of the commuters, for the cars to respect the riders,” said John Estacio, Nuvali general manager. “We share the same road, so we want to set a bicycle culture while Nuvali is not yet fully developed. Today we have the highest score among all of Ayala Land’s properties in terms of respect for commuters.”

Nuvali has the proper platform to host the qualifier for the world championship, said Geoff Kronenburg, technical delegate of the UCI.

Estacio said the routes are safe, commuter bikers have dedicated lanes, the roads are tree-lined. On the trail are numerous entrances and exits so that a biker can get on and off the trail at any point.

“Dirt weekend” will hold four mountain bike (MTB) races, two of which are qualifiers that will cover the range of bike handling skills of the riders.

The race course is a 70-km trail designed with technical descents, big drops, rock gardens and obstacles similar to what arefound in actual mountain terrain.

Kronenburg said the Marathon Series in Nuvali is one of only 12 in the world. He, along with a team of top Filipino riders, designed the race trails for the festival. He has been designing trails for the last 15 years.

The UCI Cross Country Olympic (XCO) has a shorter route of 35 km. The XCO is a Registered Class 3 UCI race that lets elite riders earn UCI points for the world series.

A gravity (downhill) event, Four Cross, will have four riders racing through a 400-meter BMX-like trail, with jumps, drops and obstacles. It’s an elimination race, with the top finisher proceeding to the next round. This is Nuvali’s “signature” race, drawing more than 1,000 riders each year.

There will also be a Cross Country 35 km Fun Race for newbies and enthusiasts, with trails that are less technical, requiring less or minimal skills.

But that is not to say the trails are devoid of challenges. Parts of the route, in fact, are trails of the UCI Cross Country Marathon.

The fun race is a teaser, Kronenburg said, designed to make them come back for more.

Bids from many countries

There were bids from many countries, some more experienced in hosting than the Philippines, but Kronenburg said UCI chose Nuvali for its integrated structure and sustainability.

“There’s a solid traffic management system and trail management system,” he noted. “Nuvali is not one of those places that puts on one race, and then nothing else happens for the rest of the year. We see that they’re constantly developing MTB trails and maintaining the tracks.”

Tracks, he said, are built only as the riders get better. The more skilled the riders get, the more technical the trails. When international events, such as the qualifying race, are held, the local riders either get faster or improve their technical skills. It pushes the community to step up their game.

“Right now, if you put in a world-class track, nobody in the Philippines will be able to ride it,” he said. “From an Asean aspect, the Philippines is three years behind.”

A rock garden 20-40 m long, for example, will be around 5-10 m here. But there have been gradual improvements in the last three years, Kronenburg said, enough to be hopeful that maybe the country will be ready to build world-class tracks two to three years from now.

Register at Dirt Weekend or at any Fox stores and selected bike shops.