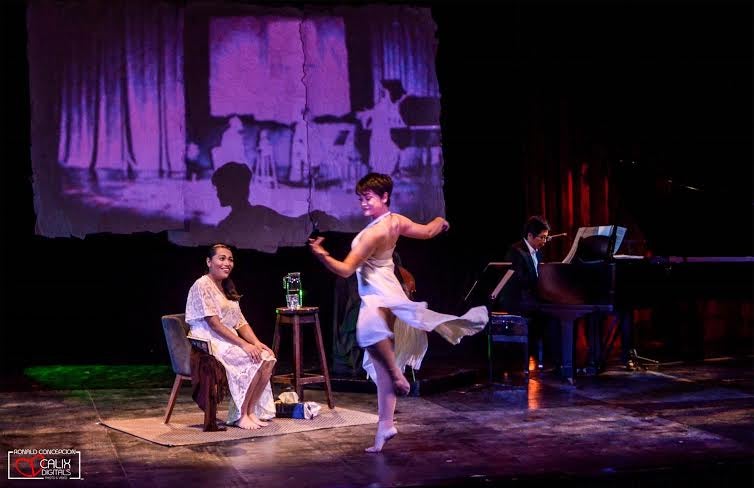 RITUAL OF REMEMBERING. "Ginugunita Kita" featured 11 poems by the late Maningning Miclat, set to music by Jesse Lucas, sung by Maningning’s sister Banaue Miclat-Janssen with Renato Lucas at the cello, and with the special participation of tenor Al Gatmaitan and dancer-actor Delphine Buencamino. PHOTOS FROM ALMA CRUZ MICLAT

A radiant feast of poetry and music inspired by the art and life of Maningning Miclat was held at the 7th biennial Poetry Awards of the Maningning Miclat Art Foundation Inc. (MMAFI) last Sept. 3, at the Tanghalang Aurelio Tolentino of the Cultural Center of the Philippines.

At the heart of the ritual of remembering was “Ginugunita Kita,” a concert with an overture and 11 poems by Maningning, set to music by Jesse Lucas, sung by Maningning’s sister Banaue Miclat-Janssen with Renato Lucas on the cello, and with the special participation of tenor Al Gatmaitan and dancer-actor Delphine Buencamino.

For Banaue, however, the memories of Sept. 29, 2000, are wrought with pain and darkness. For the first time, she shared with the audience the ordeal of dealing with the death of her sister. She bravely recalled her torment over the seeming contradiction between the words of assurance given her by Maningning that morning and the stark reality of later bringing her sister’s broken body to the morgue at day’s end.

In the face of confounding realities, Banaue could not bring herself to read Maningning’s book of poems, “Voice from the Underworld,” which had been launched a few months before she decided to pass on at the age of 28.

It was only when composer Jesse Lucas asked Banaue to sing the poems to which he had written music that she mustered the courage to listen to her sister’s voice again, and to go deeper in understanding that brief life’s seeming contradictions.

Last May 30, when she first sang the poems to an intimate audience of family and close friends, she admitted that interpreting Maningning’s poems through the music of Lucas had been “a roller-coaster ride of emotions and discovery.”

Singing the poems onstage demanded of her the most difficult challenge for an actor: breaking the fourth wall and directly speaking to and involving the audience in remembering her pain of loss, as well as in experiencing the transcendent joy in having loved Maningning well. It meant being completely vulnerable.

Coming full circle in her process of mourning for her sister for 15 years, Banaue said her pain has now transformed gently into gratitude. In her words: “Thank you, Maningning. Through your death, you showed us that young artists should strive to live long, fruitful lives.”

At the concert, Lucas also spoke of his own discovery of Maningning’s poems. When he read “Voice from the Underworld,” he found her poems so “melodious” that he could “hear the music through the images … poignant thoughts about life, pain and love.”

The music in these images and thoughts were the touchstones of his compositions. In his composer’s notes, he concluded that writing music to Maningning’s poems felt like discovering “a new language, a language that speaks directly to the soul.”

Maningning’s first poem in Chinese called “Shi Bu Shi” (Isn’t It), which she called her “poetic nonsense,” found its other language in Lucas’ composition, which alluded to the melodies Maningning and Banaue heard while growing up in the 1970s in China.

In Maningning’s own writ about the poem, she said: “I was eleven. It was so happy. It was a free verse, and I recognized the rhythm in me. When my friends read it, they told me it was a nonsense poem.”

But Lucas’ music heard the playful joy that is intrinsic in Maningning’s art. And it is this undercurrent of joy in the making of beauty that made him and Banaue give the audience the possibility of leaping across whatever dark abyss each one may have to confront in life.

Poetry’s leap of faith, embodied in the work of three young poets writing in Filipino, English and Chinese, was also honored.

Reparado Bangot Galos III won for his collection called “Mga Pagtitig Mula sa Dalampasigan.” Jasmine Nikki C. Paredes wrote the collection “We Will See the Scatter,” which got the award for the English category. Pan Wei Li won for her poetry in Chinese; she had also won the Maningning Miclat poetry award in 2011.

Of the human feat of remembering through art, Maningning herself once said: “We the children have since grown up. Yet we remember the past differently. Fragments of memories tiptoe into the vignettes of here and now. For all that we have heard and said, for all that we have done, for what we have become, we remain keepers of our own voice.”

Under the leadership of Alma Cruz Miclat, MMAFI’s president and executive director, the foundation’s commitment to support young artists like Maningning, who have the muse of poetry or the muse of painting hovering above their shoulders, will continue, as it had done so in the last 15 years.

This space can only be the artist’s freedom to be; the freedom to create, to make new.

Marjorie Evasco is a multi-awarded poet and writer. Her books have won the National Book Awards for poetry, oral history and art.